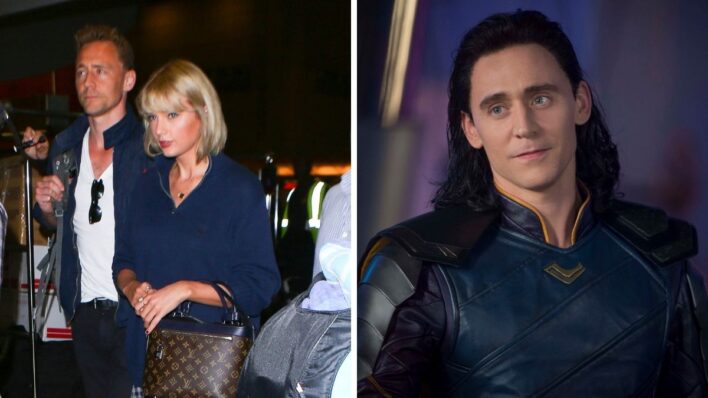 Tom Hiddleston’s relationship with Taylor Swift had a lot of people talking–and questioning the validity of their short-lived romance.
By Shaoni Das    June 9, 2021

Tom Hiddleston’s relationship with Taylor Swift had a lot of people talking–and questioning the validity of their short-lived romance.

A red-hot summer fling, or a highly elaborate publicity maneuver?

This is the million-dollar question that puzzled the public in the summer of 2016. Tom Hiddleston and Taylor Swift’s romance was brief but powerful. It didn’t just generate run-of-the-mill gossip; it triggered widespread discourse about the nature and perception of celebrity relationships. To what extent are they real? How much are these famous people hiding? How do they balance the ferocious scrutiny with their blossoming feelings for one another?

Though it’s impossible to confirm what truly occurred between the pair, Tom Hiddleston is unambiguously clear on where he stands. His campy, devilish turn as Loki in the Marvel movies transformed his career and turned him into one of the most beloved, high-profile actors in the scene. He’s charming, he’s sexy, he’s British — it’s not rocket science to figure out why his personal life draws outsized curiosity.

He continues to ascend through the ranks with his thoughtful, intriguing performances on-screen, so why did his short-term relationship with Taylor put a blemish on his otherwise remarkable career?

The summer of 2016 was a seismic one for Taylor Swift. She’d first been the subject of a controversial song, ‘Famous,’ from her longtime nemesis Kanye West, after which she was “exposed” by Kanye’s wife Kim Kardashian for seemingly consenting to be featured in his crude track. The Taylor-Kanye-Kim fracas is a difficult one to break down and cannot be captured in a few words.

All that to say — when the mainstream media leaped on the story and directed their full attention to Taylor, it was none other than Tom Hiddleston caught in the crosshairs. Taylor and Tom had met at the Met Gala a few months prior to the controversy, where they reportedly danced to Beyoncé’s ‘Crazy in Love.’ By early June, Taylor and Calvin Harris were reported to have hit Splitsville. In just two weeks, photos of Taylor and Tom kissing surfaced in the UK tabloids, marking the beginning of a wild but fascinating romantic adventure.

The public display of affection right out of the gates was a cause for concern among many commentators. Many assumed that Taylor needed to rehabilitate her reputation in the wake of the Kanye West blunder, especially because she was targetted as the aggressor of the whole situation. Similarly, Tom Hiddleston was accused of leveraging Taylor’s fame to break through to American audiences. The speculation was fervent and boundless, peaking at Tom Hiddleston’s wearing of the infamous I <3 T.S. tank top during the Fourth of July weekend. This confirmed to doubters that the relationship was wholly staged and that Tom and Taylor had set up this farce to drum up excitement.

Tom Hiddleston denied the PR relationship claims at the time, saying, “The truth is that Taylor Swift and I are together, and we’re very happy. Thanks for asking. That’s the truth. It’s not a publicity stunt.”

By September 2016, their relationship had fizzled, and they decided to go their separate ways. Their steamy adventure ultimately did cause tons of publicity. Whether or not this was planned is the question on top of everyone’s mind.

When asked about his conspicuous relationship with Taylor a year later, Tom said, “Of course, it was real.” He defended his choice to date her and said that he couldn’t expect most people to understand his predicament of finding love in the limelight. Additionally, most made up their minds upon seeing only paparazzi photos; they virtually had no context of what really transpired between the couple, and so they opted to go with the most superficial narrative.

A  relationship exists between two people. We will always know what it was. The narratives that are out there altogether have been extrapolated from pictures that were taken without consent or permission, with no context […] [Taylor]’s generous and kind and lovely, and we had the best time.

Tom Hiddleston also elaborated on the tank top debacle, sharing that he had slipped and hurt his back right before the notorious photo was clicked. Needing to “protect the graze from the sun,” he asked if anyone had a shirt. That’s when one of Taylor’s friends pulled out the tank top and tossed it in his direction. “And we all laughed about it. It was a joke.”

Reflecting on the tank top hubbub, Tom said that he “was surprised that it got so much attention” and that he doesn’t like the fact that it became an “emblem” of his dalliance with Taylor. He said that he doesn’t try to take the theories to heart, adding that he only “know[s] the woman I met. She’s incredible.” Being hounded by paparazzi on a daily basis is a nightmare and understandably leaves you feeling jaded with the whole concept of love.

At the end of the day, it’s Tom who has to live with the memories of his fleeting love affair with Taylor. If those memories continue to be tainted by disheartening conspiracy theories, it’s only going to make him more apprehensive about seeking a future partner. He said you have to go above and beyond to preserve a romantic connection amidst the spotlight. Like most other partnerships, they take work.

Tom is currently rumored to be dating actress Zawe Ashton. They acted together in 2019’s London production of Betrayal and have been going strong since. They reportedly moved in together during the summer of 2020, and with Zawe stepping into the Marvel Cinematic Universe in 2022, they are set to be the latest Marvel sweethearts. What’s so special about this relationship is how private it’s been from the get-go. Tom Hiddleston hasn’t uttered so much as a word about this budding relationship, and we can probably guess why.

He’s had to learn from the past to ensure that his next chance at love isn’t dampened by the press fervor. So he is ready to do whatever it takes to cherish the sweet moments with Zawe without letting the media dig their claws into his private world.

Tom Hiddleston had to learn how to navigate a judgmental, cruel culture that’s consumed by belittling others and exploiting them for one’s own gain. Though he’s likely never going to recover from some aspects of his rollercoaster relationship with Taylor, at least he’s been able to lick his wounds and build a happier future with Zawe.

I’m protective about my internal world now in probably a different way. That’s because I didn’t realise it needed protecting before.

Every single relationship is an opportunity to learn about yourself

Not everyone you start seeing is going to end up as the person of your dreams. There’s just one slot, which means you’re likely going to encounter a number of false alarms. But you can’t perceive this trial-and-error process as a failure. Every relationship is an opportunity for you to learn something about yourself, something about your passion, your likes, your dislikes, and you take those learnings and embed them into your future interactions.