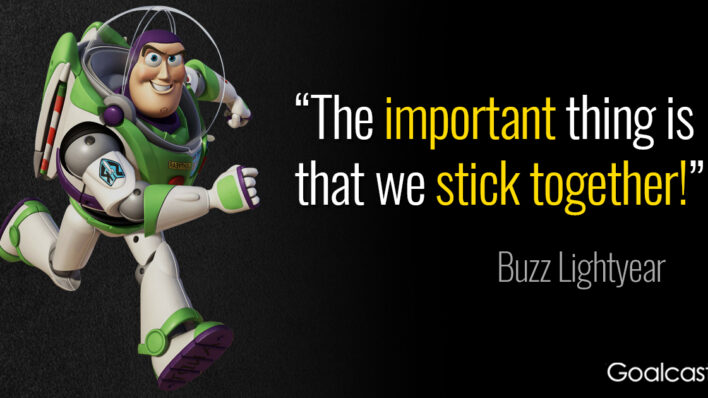 Toy Story is about a world where toys are actually alive and pretend to be lifeless only when humans are around. It also features a human protagonist: Andy, a little boy. The main characters of the movie, Sheriff Woody (Andy’s favorite toy) and Buzz Lightyear (the new toy Andy gets on his birthday), become rivals fighting for the child’s love.

In the story, every old toy fears being replaced whenever children receive new gifts, and Woody knows that he has to do anything in his power to remain Andy’s favorite one.

All the fuss about being the “best” for Andy eventually ends with the two main toy characters helping each other, driving a narrative arc that goes from rivalry to teamwork and friendship.

Because friends are such an important part of our lives, we need to remind them every now and then just how much they mean to us.

Here are 11 Toy Story quotes that will make you cherish your friendships. I have been chosen! Farewell, my friends. I go on to a better place.

Reach for the sky!

To infinity… and beyond!

The important thing is that we stick together! But the thing that makes Woody special is he’ll never give up on you…ever. He’ll be there for you, no matter what.

A good soldier never leaves a man behind.

You’re cute when you care.

Authority should derive from the consent of the governed, not from threat of force. – Barbie

I can’t stop Andy from growing up… But I wouldn’t miss it for the world!

Woody once risked his life to save mine, and I couldn’t call myself his friend if I wasn’t willing to do the same.