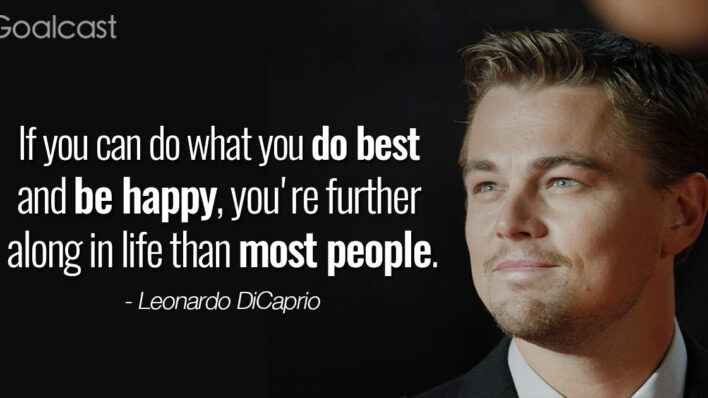 Unlike many former child actors who tend to crash and burn (or fade into oblivion) in their teen years and
By Goalcast    November 11, 2016

Unlike many former child actors who tend to crash and burn (or fade into oblivion) in their teen years and beyond, 42-year-old Academy Award winner Leonardo DiCaprio has boasted a steady resume of film hits for nearly two decades, from his heartbreaking turn in 1993’s What’s Eating Gilbert Grape? to a starring role in box-office bombshell Titanic.

In addition to his impressive film career, Leo has used his Hollywood capital on a number of philanthropic ventures. He’s become one of the world’s top climate change champions and advocates for more stringent restrictions on carbon emissions every chance he gets.

In fact, he gave specific mention to the environment in his Oscar acceptance speech for his work in The Revenant, imploring the audience to “work collectively together and stop procrastinating” when dealing with climate change. These values are mirrored in his daily life; he drives only battery-powered vehicles and lives in a solar-powered home.

Below are 12 of the most inspiring Leonardo DiCaprio that should encourage you to work on what makes you happy. “Be thankful for the hard times, for they have made you” – Leonardo DiCaprio

“It’s easy to fall into the trap of believing all the hype that’s written about you… Who knows? In a couple of years, you might find me in the loony bin!” – Leonardo DiCaprio

“If you can do what you do best and be happy, you’re further along in life than most people.” – Leonardo DiCaprio “Pay close attention to people who don’t clap when you win.” – Leonardo DiCaprio

“To believe in love, to be ready to give up anything for it, to be willing to risk your life for it, is the ultimate tragedy.” – Leonardo DiCaprio

“A wrong connection will give you shock throughout your life, but the right one will light up your life.” – Leonardo DiCaprio “Everybody has gone through something that has changed them in a way that they could never go back to the person they once were.” – Leonardo DiCaprio

“I just really love doing what I do. I know every career is fleeting and there will be time periods when I don’t get the opportunities that I’m getting right now, so I am taking advantage of them.” – Leonardo DiCaprio

“Only you and you alone can change your situation. Don’t blame it on anything or anyone.” – Leonardo DiCaprio “My mom, Irmelin, taught me the value of life. Her own life was saved by my grandmother during World War II.” – Leonardo DiCaprio

“I really am motivated by being able to work with great people and create a body of work that I can look back and be proud of.” – Leonardo DiCaprio

“I really don’t know what I’m doing… I don’t. It’s terrible. I go in there and I learn how to be like the character and do the best I can, and that’s all I really do.” – Leonardo DiCaprio