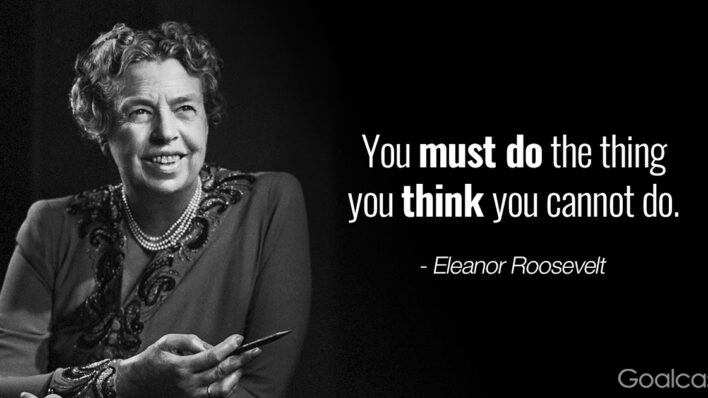 U.S. First Lady Eleanor Roosevelt was far more than the wife of President Franklin D. Roosevelt (1934-45). She was an outspoken public figure in her own right, an author, humanitarian, and champion of diverse social causes who helped draft the 1948 Universal Declaration of Human Rights.

Eleanor Roosevelt transformed the office of the First Lady, as well as the way Americans viewed the role of women in public life. Not content to stay confined to domestic issues — and unafraid to ruffle the feathers of the many critics who complained that she was overstepping her role — Eleanor Roosevelt held her own press conferences, wrote her own newspaper column, traveled abroad to support American troops during World War Two, and frequently spoke out in favour of women’s rights, children’s issues, helping the poor, and combating racial discrimination. And she did all of this while helping to raise the six children she had with FDR.

Eleanor Roosevelt stepped out from the imposing shadow of her husband, engaging a long and fruitful career at the United Nations following FDR’s death in 1945. There she served as a delegate to the General Assembly until 1953, before becoming chair of the U.N.’s Human Rights Commission, where she contributed to what she considered her greatest achievement: the Universal Declaration of Human Rights.

Though controversial at the time, Eleanor Roosevelt is today remembered as one of America’s most important women leaders. Through her life’s work, four books and countless public interventions, she continues to inspire people of all backgrounds and political persuasions to strive for the greatness that’s within us all.

Here are our Top 25 Eleanor Roosevelt Quotes to Inspire Your Greatness. People grow through experience if they meet life honestly and courageously.

Friendship with one’s self is all important, because without it one can not be friends with anyone else in the world.

Do what you feel in your heart to be right — for you’ll be criticized anyway.

It is better to light a candle than curse the darkness.

You gain strength, courage, and confidence by every experience in which you really stop to look fear in the face. You are able to say to yourself, ‘I lived through this horror. I can take the next thing that comes along.’ You must do the thing you think you cannot do. A woman is like a tea bag; you never know how strong it is until it’s in hot water.

I believe anyone can conquer fear by doing the things he fears to do, provided he keeps doing them until he gets a record of successful experience behind him.

Since you get more joy out of giving joy to others, you should put a good deal of thought into the happiness you are able to give.

You wouldn’t worry so much about what others think of you if you realized how seldom they do.

No one can make you feel inferior without your consent. The purpose of life is to live it, to taste experience to the utmost, to reach out eagerly and without fear for newer and richer experience.”

It takes as much energy to wish as it does to plan.

When you have decided what you believe, what you feel must be done, have the courage to stand alone and be counted.

The giving of love is an education in itself.

The future belongs to those who believe in the beauty of their dreams.

A stumbling-block to the pessimist is a stepping-stone to the optimist. You can often change your circumstances by changing your attitude.

Happiness is not a goal; it is a by-product.

Tomorrow is a mystery. Today is a gift. That is why it is called the present.

Do one thing every day that scares you.