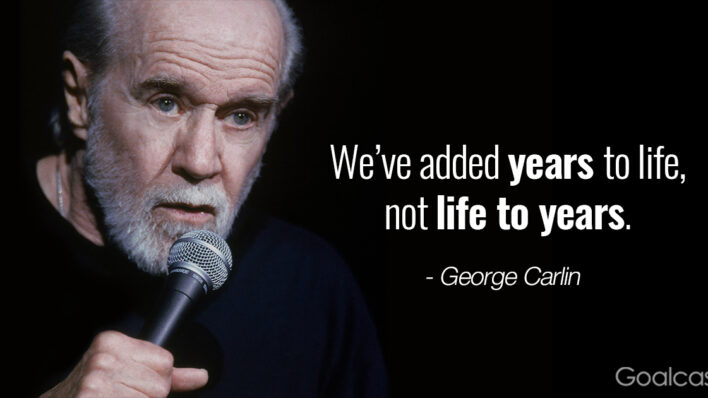 Quotes by George Carlin – One of the most iconic comedians of all time. Famous quotes on life, death, politics and of course the American government
By Goalcast    April 28, 2017

Quotes by George Carlin – One of the most iconic comedians of all time. Famous quotes on life, death, politics and of course the American government

George Carlin was no stranger to controversy. In his 50-year career as one of America’s most poignant and provocative social critics, the irreverent actor, author and comedian left no sacred cow unsinged as he took to lobbing one grenade after the next into the comfort zones of American life. Carlin certainly aimed to provoke, but it’s the why and how of it that made him so exceptional. Beneath George Carlin’s biting sarcasm and razor-sharp wit lay a heartfelt indignation at the injustices he observed in the world around him. And far from staying to the safer path, he leapt time and again past the cliff of “common” wisdom, in the hopes of rattling us into questioning the way we live.

The Grammy-Award-winning star of 14 stand-up comedy specials on HBO, George Carlin was widely considered one of American’s most influential comedians. Whether we agreed with his acerbic commentary or not, his words always reminded us of how sharp a weapon humor can be in slicing through the surface of our assumptions — and leaving us, as he would say, “gasping for breath.”

George Carlin was posthumously awarded the Mark Twain Prize for American Humor in 2008, after he passed away that year at the age of 71. And in 2017, Rolling Stone magazine ranked Carlin second on its list of the 50 Best Stand-Up Comics of All Time, just behind Richard Pryor.

The best (and funniest) George Carlin Quotes on politics, life & death and of course the American government 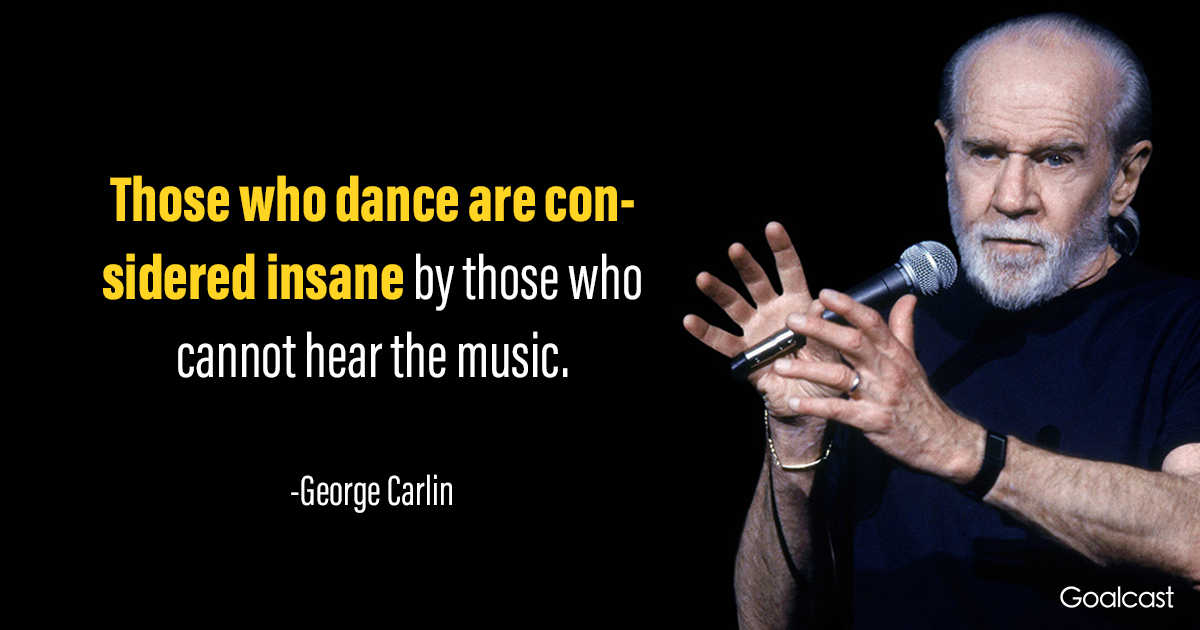 Laugh often, long and loud. Laugh until you gasp for breath.

Those who dance are considered insane by those who cannot hear the music.

Never underestimate the power of stupid people in large groups.

Trying to be happy by accumulating possessions is like trying to satisfy hunger by taping sandwiches all over your body.

There’s a humorous side to every situation. The challenge is to find it.

Inside every cynical person, there is a disappointed idealist. Just because you got the monkey off your back, doesn’t mean the circus has left town.

I went to a bookstore and asked the saleswoman, ‘Where’s the self-help section?’ She said if she told me, it would defeat the purpose.

The planet is fine. The people are f***ed.

By and large, language is a tool for concealing the truth. Religion is like a pair of shoes…Find one that fits for you, but don’t make me wear your shoes.

I think people should be allowed to do what they want. We haven’t tried that for a while. Maybe this time it’ll work. 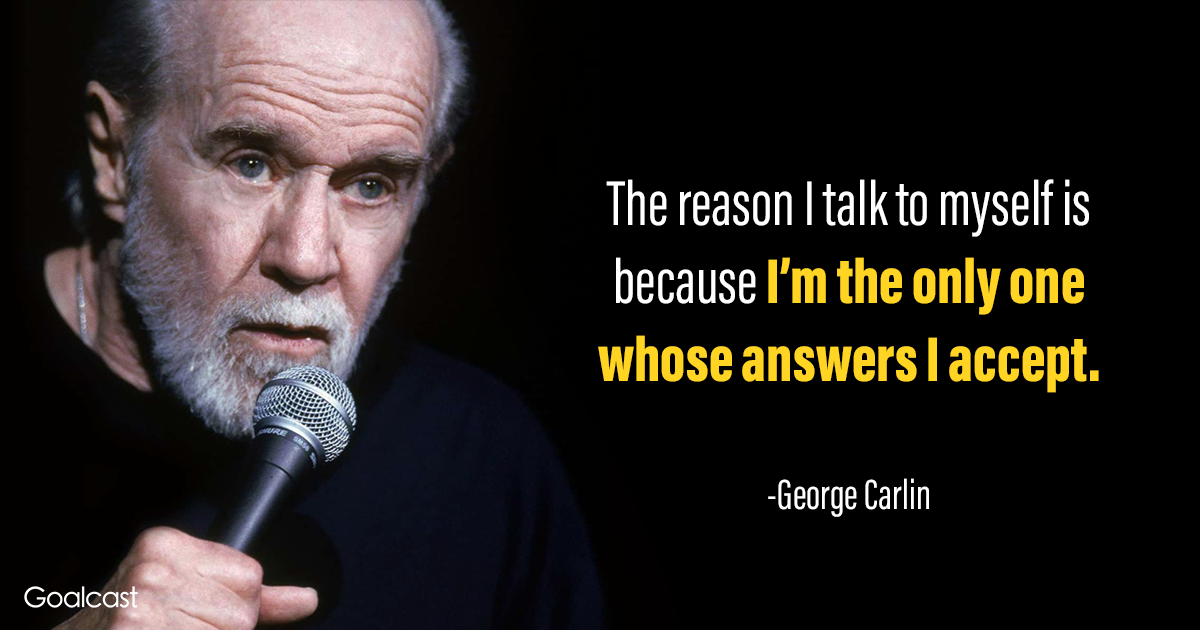 May the forces of evil become confused on the way to your house.

The reason I talk to myself is because I’m the only one whose answers I accept.

Think of how stupid the average person is, and then realize that half of them are stupider than that.

One can never know for sure what a deserted area can look like.

If it’s true that our species is alone in the universe, then I’d have to say the universe aimed rather low and settled for very little.

The caterpillar does all the work, but the butterfly gets all the publicity.

A house is just a place to keep your stuff while you go out and get more stuff.

Some people see the glass half full, others see it half empty. I see a glass that’s twice as big as it needs to be.

The main reason Santa is so jolly is that he knows where all the bad girls live.

If you try to fail, and succeed, which have you done?

I like it when a flower or a little tuft of grass grows through a crack in the concrete. It’s so f***ing heroic.

If you can’t beat them, arrange to have them beaten.

Atheism is a non-prophet organization.

One good reason to only maintain a small circle of friends is that three out of four murders are committed by people who know the victim.

Tell people there’s an invisible man in the sky who created the universe, and the vast majority will believe you. Tell them the paint is wet, and they have to touch it to be sure.

If work is so terrific, how come they have to pay you to do it? We have multiplied our possessions but reduced our values. We talk too much, love too seldom, and hate too often. We’ve learned how to make a living but not a life. We’ve added years to life, not life to years.

Life gets really simple once you cut out all the bullshit they teach you in school.

There’s no present. There’s only the immediate future and the recent past.

Life is not measured by the number of breath we take, but by the moments that take our breath away.

When you step on the brakes, your life is in your foot’s hands.

I often warn people: ‘Somewhere along the way, someone is going to tell you, ‘There is no ‘I’ in team.’ What you should tell them is, ‘Maybe not. But there is an ‘I’ in independence, individuality, and integrity.

The only person who is with us our entire life is ourselves.

My advice: just keep movin’ straight ahead. Every now and then you find yourself in a different place.

Everyone should try to scratch their name on the bomb of life.

The future will soon be a thing of the past. 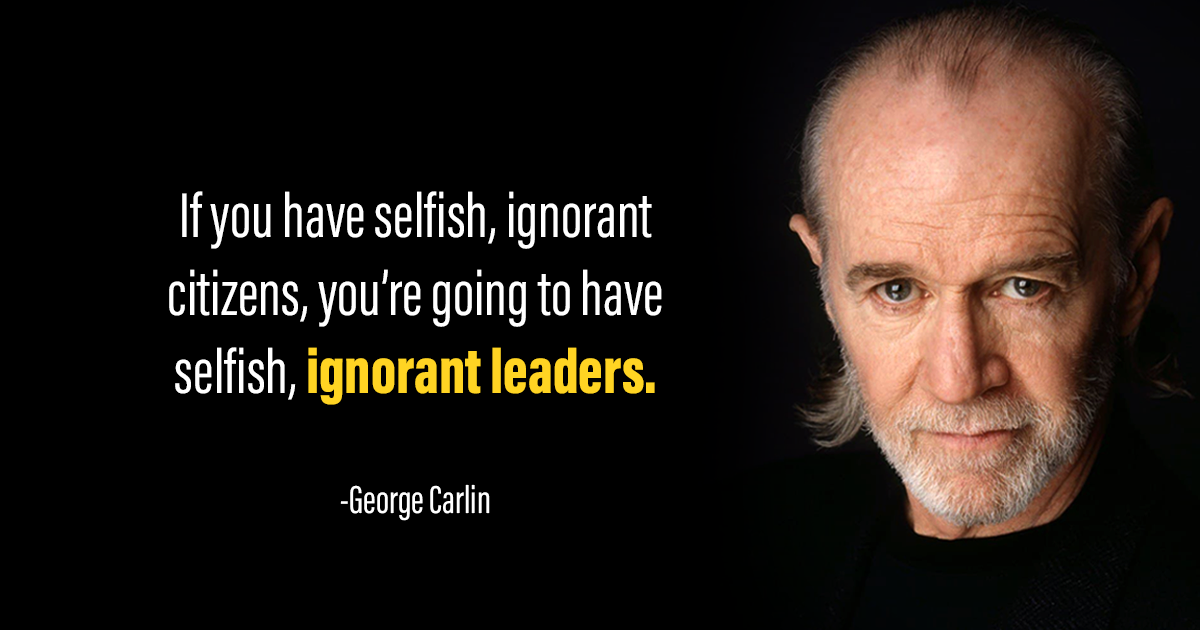 Conservatives say if you don’t give the rich more money, they will lose their incentive to invest. As for the poor, they tell us they’ve lost all incentive because we’ve given them too much money.

Bipartisan usually means that a larger-than-usual deception is being carried out.

Careful, if you think too much, they’ll take you away.

How is it possible to have a civil war?

To me, authority is something that a freer spirit, a more independent mind, and a person who can handle the world, doesn’t need guidance from.

Boy, these conservatives are really something, aren’t they? They’re all in favour of the unborn. They will do anything for the unborn. But once you’re born, you’re on your own.

If churches want to play the game of politics, let them pay admission like everyone else.

I’m completely in favour of the separation of Church and State. My idea is that these two institutions screw us up enough on their own, so both of them together is certain death. 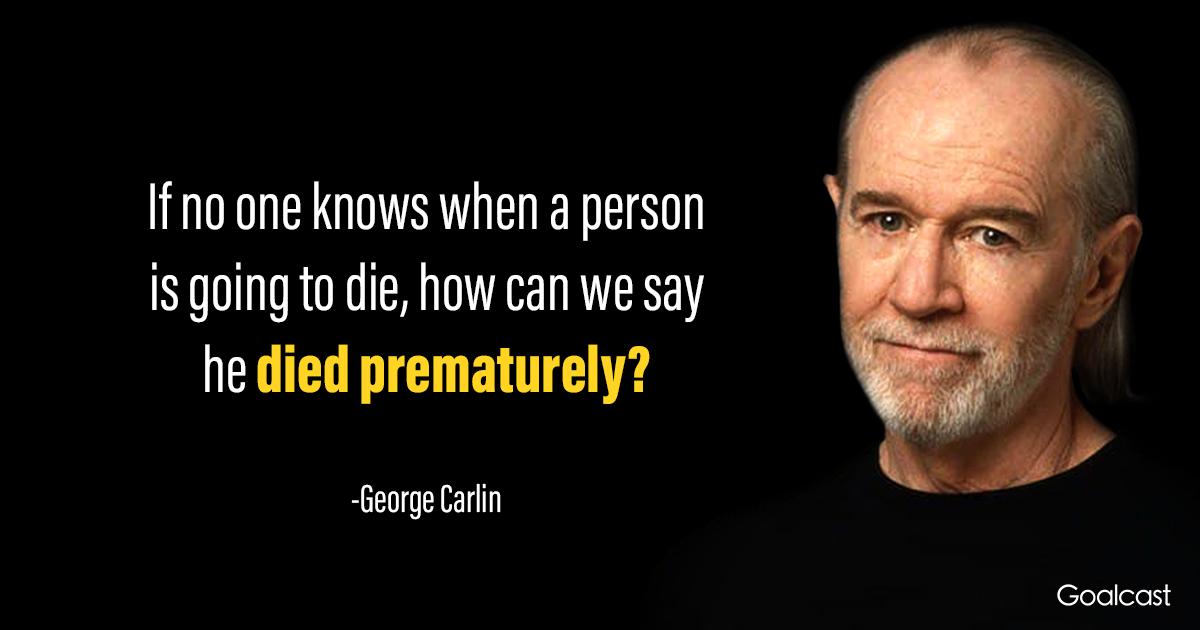 Frisbeetarianism is the belief that when you die, your soul goes up on the roof and gets stuck.

Death is caused by swallowing small amounts of saliva over a long period of time.

Property is theft. Nobody “owns” anything. When you die, it all stays here.

I’m always relieved when someone is delivering a eulogy and I realize I’m listening to it.

If no one knows when a person is going to die, how can we say he died prematurely?

At a formal dinner party, the person nearest death should always be seated closest to the bathroom.

In America, anyone can become president. That’s the problem.

The owners of this country know the truth: It’s called the American dream because you have to be asleep to believe it.

This is the best we can do folks. This is what we have to offer. It’s what our system produces: Garbage in, garbage out.

If honesty were suddenly introduced into American life, the whole system would collapse.

Sooner or later the people in this country are going to realize: the government does not give a f**k about them. The government doesn’t care about you, or your children, or your rights, or your welfare, or your safety. It’s interested in its own power. That’s the only thing keeping it and expanding it wherever possible.

Political correctness is America’s newest form of intolerance, and it is especially pernicious because it comes disguised as tolerance. It presents itself as fairness, yet attempts to restrict and control people’s language with strict codes and rigid rules.

I’m not sure that’s the way to fight discrimination. I’m not sure silencing people or forcing them to alter their speech is the best method for solving problems that go much deeper than speech.