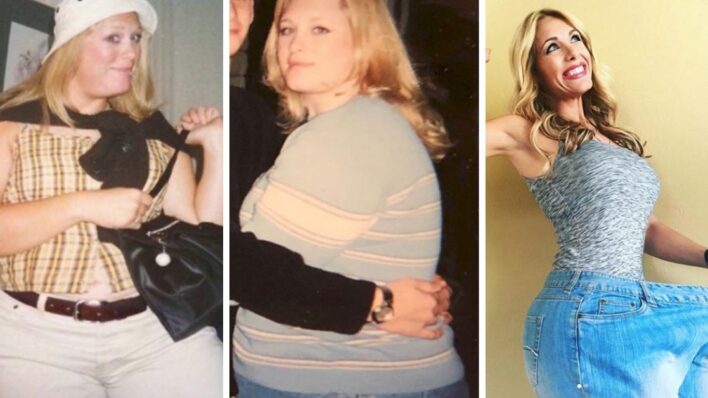 Christina Jordan received a major wake-up call which forced her to turn her life around in a major way and achieve her highest potential.
By MJ Kelly    May 8, 2020

Christina Jordan received a major wake-up call which forced her to turn her life around in a major way and achieve her highest potential.

Christina Jordan reached her breaking point while on a Disneyland family vacation, when she was kicked off a ride for being too heavy.

My family and I waited two hours in line for one ride, and we’re hot and cranky. And when we finally go to sit, the seat belt doesn’t fit over me.

At the time, Jordan weighed 271 pounds.

“I bolted off that ride. And I go to leave, and I couldn’t fit through the people counter. My hips were too wide, so they had to open the gate, and I felt like cattle being brought out to slaughter,” she continued.

What was supposed to be a fun and memorable day at “the happiest place on earth” turned out to be the most embarrassing moment of her life, but it also woke her up to the fact that she had to make a change.

I didn’t want to live the rest of my life on the sidelines.

A diagnosis that scared her

Determined to take charge of her life, she returned home from the trip and began exploring her options. Over the following year, she tried every trick in the book to lose weight – diets, diet pills, weight loss doctors, personal trainers, but nothing seemed to work.

In fact, instead of losing weight, she actually ended up gaining more and her health was deteriorating. That same year, she was diagnosed as borderline type two diabetic with severe hypoglycemia.

I was terrified because nearly every member of my family was overweight and had diabetes, and several had even died from it.

Christina recognized the unhealthy relationship in her life

Jordan was teased and bullied her entire childhood for being overweight, and her self-esteem took a beating. Her unhealthy relationship with food continued into adulthood, and she often hid food in her closet and under her bed.

I would eat until my stomach was so full that I would cry. Then as soon as I could eat again, I would.

After spending a year trying everything under the sun to shed some pounds without success, she finally decided to take control, on her own terms.

Jordan started by sitting her husband down and asked him to help her stay accountable during her health journey. She completely immersed herself into learning about holistic nutrition and quickly got rid of all the junk food in their home.

“I actually hated any kind of vegetable or fruit, so I had to force myself to try new foods,” Jordan remembered.

Then, she began taking a simple, but brisk walk every night after dinner, for the next year, until she was down 100 pounds.

Within that year, she was able to completely reverse her diabetes, and found herself motivated to continue her transformation journey. Jordan began incorporating different workouts into her exercise routine until she became pregnant with her third son. Even then, she only gained a quarter of the weight she had put on during her previous pregnancies.

Jordan was able to lose the pregnancy weight and more, for a total weight loss of 134 pounds, and she continues to exercise five days a week.

She became a new woman

Inspired by her own success, Jordan quit her full-time job to go back to school and become a nutritionist. Today, she works to help others achieve their health goals and enjoys taking weekend hikes with her family.

For Christina, the transformation was more than just about appearances. It is about getting back in touch with who she really was and unlocking her potential.

I realized that I would be the best mom and the best wife, by being the best me.

Transforming yourself isn’t just about looking good–it’s about finding the best version of ourselves, the one that always existed but had been buried away.