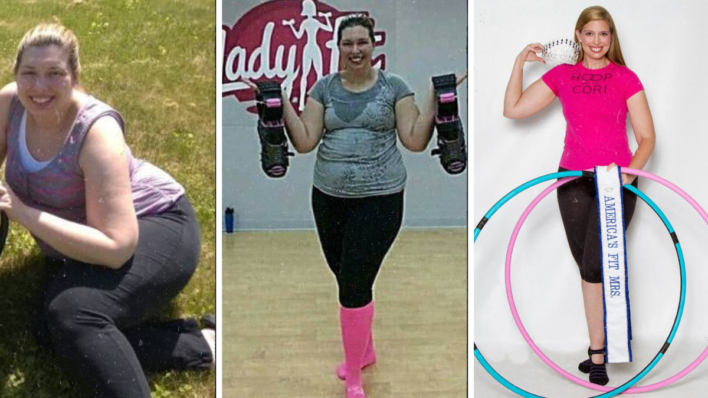 Cori Magnotta lost 85 lbs in the year after giving birth to her son when she discovered a fun hula-hooping workout routine that she loved!
By Arielle London    June 7, 2021

Cori Magnotta lost 85 lbs in the year after giving birth to her son when she discovered a fun hula-hooping workout routine that she loved!

We all wish that we could get fit by doing something fun. It’s the dream.

When we have a goal in mind, sometimes the path to getting there is a little mirky. Our determination is there, our intention is there, but the who, what, when, where, and how of it all is a bit unclear.

The words “hoop dreams” typically evoke images of young basketball players aspiring for a shot at success in the NBA. Well, for one new mom wanting to shed the baby weight, the term “hoop dreams” took on a whole new meaning.

Cori Magnotta hula-hooped as a child, but as she grew older, she grew further from her beloved hoop.

When it came to workouts, Cori says that she didn’t find them “fun.” She tells Women’s Health through Sarah Klein at Prevention, “I would join a gym, go once, and never go back.”

Magnotta struggled with her weight her entire life. Except things got a little more complicated once she became pregnant with her son.

But I have yet to meet someone I can’t teach to hoop! I have 21-year-olds and 65-year-olds in my class, petite people and tall people, couch potatoes and marathoners—it’s for anyone and everyone.

“When I was pregnant with my son, I developed preeclampsia, or high blood pressure, and had to be on bedrest for two months. Being sedentary contributed to my weight gain during my pregnancy,” Cori recalls.

Many new moms struggle with getting the baby weight off for a whole multitude of reasons. Cori experienced the same saying, “But I struggled with getting the rest of it back off. I developed hypothyroidism after my pregnancy and my metabolism had slowed, making it easier to gain weight and that much more difficult to lose it.”

She found out that she hated traditional workouts

By October 2014, Cori was 250 Lbs and looking to lose more than the first initial 15 lbs. She began researching the Internet for “fun” workouts. Magnotta discovered FXP Fitness, a workout routine that involves a weighted hula-hoop and utilizes techniques from barre, yoga, and pilates.

Cori says, “I remembered how much I loved hooping as a kid and signed up for a class. I drove from my home in Portland, Connecticut, to Massachusetts, the only place classes were available at the time.  I remember thinking, ‘Let me go see what this is all about.’”

Magnotta fell in love with the workout! Cori says, “it’s impossible to not smile while Hula-Hooping.”

Cori describes her first experience hooping saying, “I wore a fitness tracker and a heart-rate monitor and watched my heart rate spike like I was doing a high-intensity interval training workout. I could burn as much as 800 calories in an hour doing the class’s combination of ballet movements, yoga poses, strength exercises like squats, and of course traditional waist hooping.”

It helped that I now have a 2-year-old I have to chase everywhere! Once you start exercising, there’s a snowball effect: You have more energy to do more things, like cook instead of going to the drive-thru and play with my son instead of watching him at the playground.

She continues saying, “We even hooped around our arms and our hands to give our waists a break. We used the weighted hoop to do stretches and hooped while we did dance routines like the YMCA and the Macarena.”

Cori took the two-pound weighted hoop home with her and began to hoop alone, starting with only 10 minutes a day.

Magnotta recalls, “It was easy to stand in front of the TV and whip it around my waist, even if I had toys all over my living room floor from my son. It didn’t take me long to decide that I wanted to become an instructor myself. I decided to go to Boston to get certified.”

As Magnotta began to slowly see results, eventually within the year she lost 85 lbs!

Cory says, “It helped that I now have a 2-year-old I have to chase everywhere! Once you start exercising, there’s a snowball effect: You have more energy to do more things, like cook instead of going to the drive-thru and play with my son instead of watching him at the playground. Now, I teach hooping three times a week.”

As a child, Cori competed in pageants. Now, 20 years later, she decided to give it another go. She was crowned America’s Fit Mrs., and for the talent portion of the competition, you guessed it… Magnotta hula-hooped to the judge’s amazement! FXP Hoop Fitness also featured Cori as Trainer of the Month.

Cori loves what she does! She explains, “The most important thing is that it’s fun. Most people crack up when I tell them I’m a Hula-Hoop instructor and tell me they can’t hoop. But I have yet to meet someone I can’t teach to hoop! I have 21-year-olds and 65-year-olds in my class, petite people and tall people, couch potatoes and marathoners—it’s for anyone and everyone.”

Cori found what worked for her. She recognized that traditional workout routines were not her vibe and she found something that was. In the process of committing to her physical health, she found not only a workout routine that she loves but even a new career!

Cori’s “hoop dreams” may have been untraditional, but that doesn’t mean that they are any less perfect for her! If at first you don’t succeed, try and try again. And when that doesn’t work, use the resources at your fingertips to find what does. When you find what works, shoot for your goals no matter what they are, and map out the road to get there.

No matter what your road looks like, make sure that it both serves you and stirs a fire within you. And remember, one person’s hula-hoop is another person’s treadmill, skipping rope, or basketball. We all have unique needs that are connected to our wants and dreams.

We all measure success on our own terms, and our paths should reflect that truth. Our health journeys are no different, and anything that brings a smile to your face is positive indeed.

Find your hula hoop and let it move you towards yours goals. They are there for the taking, it’s just a matter of mapping the road to get there.