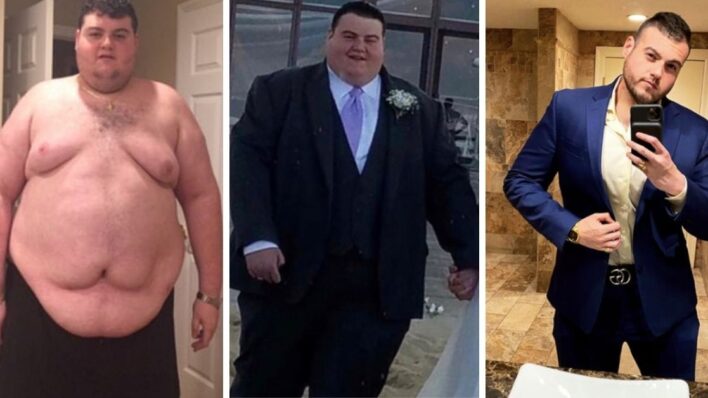 After Nearly Dying, This Man Lost Over 250 Pounds And Went After His Dream

After a nearly fatal asthma attack, John Arpino decided he would do everything to put his life back on track.
By MJ Kelly    December 22, 2020

After a nearly fatal asthma attack, John Arpino decided he would do everything to put his life back on track.

When John Arpino woke up in the hospital in 2015, following a major asthma attack that nearly killed him, he vowed to lose weight and transform his life.

I remember being petrified. I was going to die in my house at 22-years-old.

As a child, John couldn’t train because of his asthma

Soon after he was born, John developed severe asthma and allergies for which he started being treated for at the age of two.

As a kid, he spent several Halloween nights at the hospital and his condition prevented him from participating in physical activity.

“I was constantly bullied from a young age until I graduated high school. I couldn’t walk around school because of my weight,” John remembered.

I had to be given a key to the elevator in school because I couldn’t walk up and down the stairs, and I had to write book reports instead of participating in gym class.

John struggled with low self-esteem and hated the way he looked and felt. His weight stopped him from going to college after his high school graduation, because he was afraid he wouldn’t be able to get around campus or fit behind the desks.

But then, he had a major wake-up call

After his grandmother passed away in early 2015, John fell into a deep depression and coped with food and drinking, but that all changed when he had a massive asthma attack he almost didn’t survive.

“I couldn’t take a breath, it was like every bit of air was trapped inside my lungs while the weight of the whole world rested upon my chest,” remembered John.

I couldn’t speak, sweat started to pour from every part of my body. Somehow I was able to scream for my parents to call an ambulance.

Paramedics apologized to John while they put him on a stretcher, just as slipped in and out of consciousness.

“I remember looking at the clock above the door of the ambulance and praying to God and to my grandmother who had recently passed that February for another chance. I knew I had messed up,” he said.

He took his second chance seriously

Once he regained consciousness, he knew he was running out of options and committed to changing his ways.

My life was spared so it was time to make those changes I promised.

As soon as he could, John started going to the gym regularly and was able to lose 80 pounds, but his asthma kept getting in the way of his progress and he went back on steroids after another attack.

When he realized he wouldn’t be able to lose all the weight he wanted to on his own, John made the life-changing decision to undergo gastric sleeve surgery, in November 2016.

The surgery helped him drop down to 252 pounds from his initial 500 and John’s learned not to take life for granted.

The best part? How he feels about himself

“I am a totally different person now, I love life, I love challenges and I love proving myself and other people wrong and rewriting my life story,” he said.

“My health has improved dramatically, I no longer have high blood pressure or sleep apnoea, and my asthma is pretty much non-existent.”

His transformation journey has allowed him to fulfill his childhood dream of becoming a professional wrestler and has since performed in several shows, calling the experience “the thrill of his life.”

He’s documented his journey on instagram to keep himself accountable along the way, but also uses his platform to inspire others who are struggling to lose weight.

“Honestly it’s the greatest feeling in the world being able to inspire others because I know when I was at my lowest, I needed someone like my current self to guide me, to show me things were possible when I didn’t think they were,” said John.

“’My major goal in life is to help show everyone that the ‘impossible’ doesn’t exist, and you can truly have anything you want in life and pursue every single dream and break every goal, that’s the only thing that matters to me.”