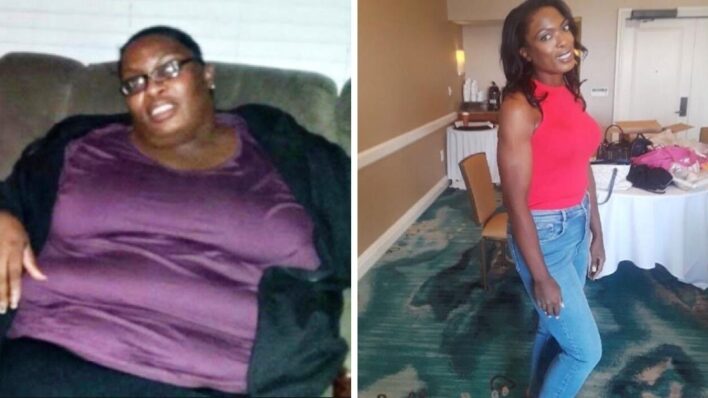 After Beating Cancer, This Woman Lost 243 Pounds To Be There For Her Son

Before her cancer diagnosis, Lukieya had always struggled with her weight growing up. Beating the disease gave her a new lease on life.
By MJ Kelly    January 22, 2021

Before her cancer diagnosis, Lukieya had always struggled with her weight growing up. Beating the disease gave her a new lease on life.

When Lukieya Coachman noticed her face started to swell in 2017, she went to the emergency room thinking it could be an allergic reaction, but found out she actually had a 10-cm mass in her chest.

“From that point on, they admit me into the hospital and they’re running all kinds of tests,” she told People.

“They’re doing biopsies, CT scans, everything. And it took them six days to come back and tell me that it was cancer.”

The treatment had adverse effects

After Lukieya’s doctor located a second mass, she was diagnosed with stage 2 Hodgkin’s lymphoma and started treatment right away.

During chemotherapy and radiation, at a time when most patients lose weight, Lukieya “did the total opposite of most people with cancer.”

I didn’t want to go out or do much because I’m not supposed to be around too many people. So, I stayed in the house and I ate.

Lukieya always struggled with her weight

Before her cancer diagnosis, Lukieya had always struggled with her weight growing up, even if she played competitive sports.

At the time, the 6’0” tall athlete focused on playing basketball and wasn’t concerned with her weight. Her talent on the court earned her a scholarship to pay for college, but after she got pregnant, she eventually dropped out.

As her priorities shifted and her athletic career took a back seat, Lukieya’s weight kept creeping up.

It was manageable during the first few years of raising her son, but right before turning 30, she remembered how it got out of control.

I would do crash diets, work out really hard and lose the weight, but I never knew how to keep it off. And every time I gained the weight back, I would add more.

The more weight she gained, the harder it was for her to do simple daily tasks. She struggled walking up and down stairs, tying her shoes and taking a shower.

I would have to turn the water on and sit on the side of the tub in-between washing off, because it was just hard to stand up for too long.

Her weight went from 340 pounds to 421 during her cancer treatments. Fortunately, they worked and Lukieya was declared cancer-free, but her weight was still a problem.

Being a survivor made her more conscious of her health, so she made the commitment to lose the weight once and for all.

She took her second chance seriously

Lukieya started a weight-loss program in 2018, initially making changes to her diet until she started walking every day. Her son got her a step counter for Christmas which helped her stay on track with her goals.

Related: 25 New Year Quotes That Will Help You Work Towards Your Goals

“When I started, I was only walking around 2,000 to 5,000 steps a day, and even that was exhausting,” she continued. “So every week, I tried to increase the amount of steps I walked, and the more I did, the more the weight started to fall off.”

Now, Lukieya is down 243 pounds and is thrilled with the progress she’s made.

I wanted to lose weight for my son, because I want to be here a long time for him and the rest of my family.

“But ultimately, it was for myself, because regardless of my weight, my son is going to love me the same. It doesn’t matter if I’m 400 lbs. or 200. So, it fell down to me loving myself enough to actually be committed to lose the weight to make myself better.”

Lukieya also wants to give herself the best chances at staying cancer-free.

“When you have cancer, there’s always a chance of it coming back, or there’s just so many other problems that are health-related because of your weight,” she says. “I want to try to be as healthy as possible, because I want to be around as long as possible.”