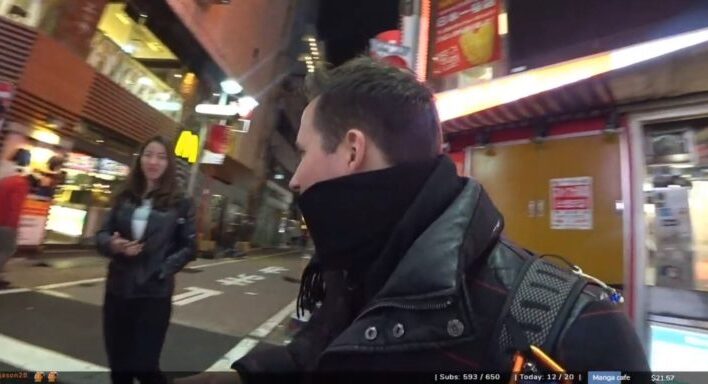 A Twitch streamer who broadcasts daily life on the streets of Tokyo ended up being an unsuspecting hero when a
By Joel Balsam    January 29, 2021

A Twitch streamer who broadcasts daily life on the streets of Tokyo ended up being an unsuspecting hero when a woman used him to get away from a man who was following her.

English-born Twitch streamer robcdee was raised in Australia, but he’s called Toyko home since 2013. During that time, he’s attracted 120,000 followers to his Twitch account where he livestreams life on the streets of Tokyo.

As you can imagine, much of his videos are uneventful — people walking by, random chats with strangers, etc. But one night during a livestream he found himself to be an unlikely hero.

She was in danger

In the video posted in 2020, robcdee comes across a woman being followed by a man in a green puff jacket. Looking over at robcdee, the woman says “He’s my friend” and squirms away from the man. Some Redditors believed she was mouthing “Help me” at robcdee, according to Daily Dot.

Clearly getting the message, robcdee puts his arm around the woman and proceeded to stand between her and the stranger.

After a brief chat about where he’s from in English (robcdee says on his account that his Japanese is 4/10), the streamer manages to fend off the man.

When he was gone, robcdee asked the woman: “Are you in danger?”

While walking around and talking to strangers — let alone putting your arm around them — sounds like a different universe now with the pandemic, this heroic act prevented a situation that could’ve turned very bad.

We all need to look out for each other. It is sadly still incredibly dangerous to be a woman and walk around in most places in the world, especially at night, so whenever someone can lend a helping hand, they should.