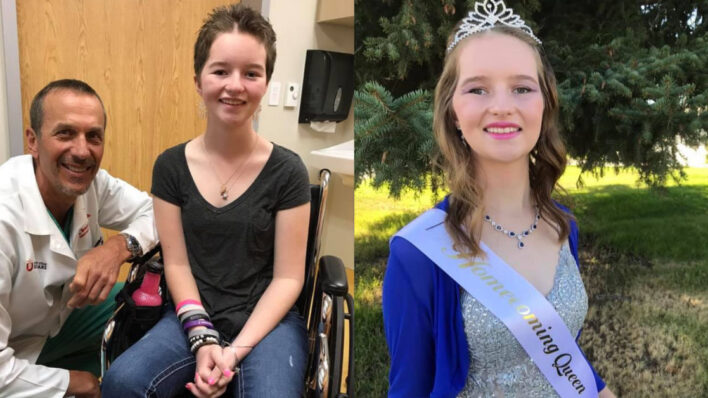 Two Years After Being Shot in the Head, Deserae Turner’s Walking Proudly as Homecoming Queen

Deserae Turner was shot in the head by boys she thought were her friends. Two years later, she’s embracing her recovery and walking as Homecoming Queen.
By Aly Walansky    October 10, 2019

Deserae Turner was shot in the head by boys she thought were her friends. Two years later, she’s embracing her recovery and walking as Homecoming Queen.

When 14-year-old Deserae Turner didn’t come home from school on February 16, she was reported missing. She was found, eight hours later, shot and nearly dead in a dry canal in her hometown.

Two teenage boys she believed were her friends asked to meet her in an isolated area, robbed her, and tried to kill her.

Luckily Deserae was discovered before it was too late, but doctors had to put her in a medically-induced coma to save her life.

She just wanted to be friends

When questioned on their motives, one of the boys joked about getting rid of Deserae because he was “tired” of her messaging him on social media. According to the Salt Lake Tribune, Deserae had been chatting with the boys over Snapchat, and they lured her to the canal to hang out.

At the meeting place, they stole $44 from her purse, threw away her bag, and destroyed her phone and iPod. Then they shot her in the head and left to spend her money at a convenience store.

In court, it was revealed that Deserae was stunned when her dad told her the boys who she considered friends were suspects in her act.

“She was surprised. She had a look of shock on her face,” said Smithfield Detective Brandon Muir.

Deserae remembers very little of that day, but did recall messaging one of her attackers about meeting at the canal to “hang out.” The bullet fired at her pierced her brain, damaging her memory and reducing mobility in the right side of her body.

While Deserae has undergone 10 brain surgeries, chiropractors visits, and hyperbaric oxygen chamber sessions, her attackers have each been sentenced to 15 years to life in prison.

It would be perfectly understandable — and even expected– after a trauma like that for Deserae to close down and not trust people she thought were her friends.

But there is a happy ending to this story: in returning to school, Deserae instead did the most social thing of all – became homecoming queen!

She was welcomed home in style

Deserae Turner was recently crowned Homecoming Queen at her high school. She proudly walked to accept her own with the help of her leg brace– and her Homecoming King– as her classmates, friends, and townspeople all cheered her on.

She sported a silver gown, beautiful curls, and make-up– all donated by her supporters in the town– and spent the evening with her good friend, Logan, as her date.

“’I was just a homecoming queen, there’s nothing special about that,'” Deserae told CNN of her initial reaction to the news. “But if you think about what I’ve been through, yes — it’s very special. It is very awesome.”

Since the boys who attacked her took advantage of her friendly and trusting nature, many people in Deserae’s shoes would close themselves off to the world that hurt them.

Instead, she’s shown so much character and strength by still being a friendly and open-hearted person. She hasn’t lost that part of herself, and we can all learn from her determination to be true to herself and to shine her light on others.