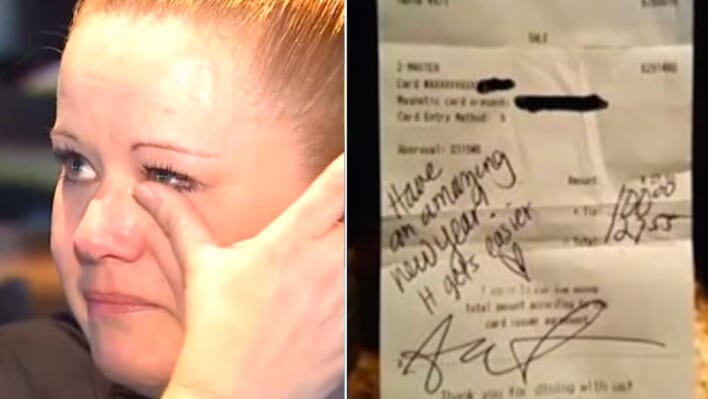 A grieving waitress in Texas was given a 370% tip and a heartwarming message.

A slow New Years’ Eve shift at a Texas restaurant turned into a powerful tip for a waitress — both monetarily and in terms of priceless lessons learned.

Heather Schelsteder was waiting tables at Cheddar’s Restaurant in Baytown, Texas when a woman with two kids sat in her section.

What unfolded was a result of what happens when two people do something that is too often lost in today’s world: have a meaningful conversation.

How One Customer’s 370% Tip Helped a Grieving Waitress

According to USA Today, Schelsteder and her customer chatted as she looked over the restaurant’s menu, eventually learning the woman worked as a criminal psychologist who was also struggling with grief.

Schelsteder told her customer she had recently lost her grandmother and had been struggling with the loss ever since.

The waitress says the psychologist was interviewing people who had returned from war and had PTSD. According to Schelsteder, the psychologist had been hit hard by her work because her brother was killed in the war.

The psychologist sat at a table near the front of the restaurant with her two young boys. As they continued to scan through the menu, Schelsteder told the psychologist about her grandmother, who had just passed.

Schelsteder admitted it was the first time in her life she had lost a loved one she was close with. Her grandmother was 85 years old.

“We both started getting teary-eyed, and then we’re both like trying to blink it away, and then it just kind of went from there,” Schlesteder said. “We just kept talking until the next table came in and she got up and left.”

Making a Difference With Kindness

Schelsteder says that the psychologist “made a difference,” specifically helping her to realize that there are still people in the world that “really do care.”

Schelsteder says that after the family of three left, she looked at the receipt and realized she had been given $100 on a $27 bill — a 370% tip.

She says a heartfelt message also read, “Have an amazing New Year. It gets easier.” Schelsteder says it made her feel “very special and important” and that the note was meaningful to her because she knew what it was like to lose a loved one.

The waitress admitted that though both the tip and note meant a lot to her, she never got to thank the psychologist for leaving two meaningful tips.

Schelsteder admitted that the double dose of kindness really did help her start off the New Year in a better place.