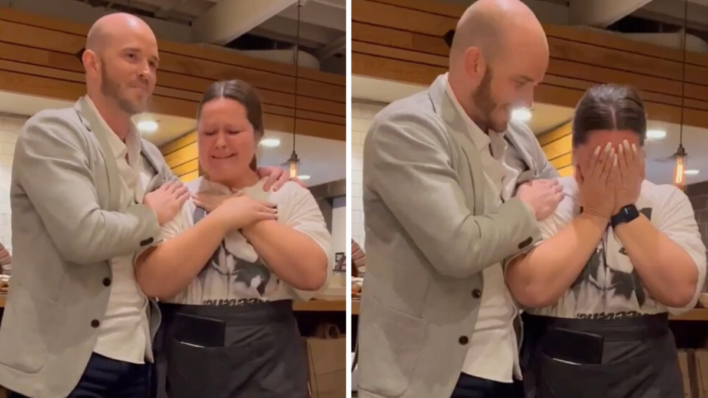 Waitress Was Fired After Receiving A $4,400 Tip – Community Steps In With Best Response

After being fired for receiving a generous tip, one server’s community went above and beyond to get her back on her feet.
By Amber Dowling    January 24, 2022

After being fired for receiving a generous tip, one server’s community went above and beyond to get her back on her feet.

Thirty-five year old server Ryan Brandt received the tip of a lifetime after serving a party of more than 30 diners last December. But when she was fired shortly afterwards, the community stepped in to help her in the most beautiful way.

A plan to pay it forward

Grant Wise and his wife wanted to give back to the restaurant community after all of the hardships it’s been through during the pandemic. So they hatched a plan to host a $100 Dinner Club- a night where everyone who dined with them would leave a $100 tip for the servers.

The first restaurant of choice was Oven & Tap in Arkansas. The couple had been there many times before and always liked the food and atmosphere. According to Wise they called ahead to make a reservation for their 30-person party and to confirm the tip sharing/tip pooling policy.

When they confirmed the restaurant did not have such a policy, they moved ahead and requested Ryan Brandt as one of their servers that night. Brandt had worked at the restaurant for three-and-a-half years and had served Wise before.

At the end of the meal, Wise announced that he and his fellow dinners, along with those who had heard about the plan on social media, were tipping Brandt and her co-worker $4,400.

In a video that Wise shared on social media, you can see Brandt breaking down in tears. The story was picked up by several news outlets and, according to Wise, inspired others to host their own $100 Dinner Clubs so that they too could give back.

It was an incredible thing to do and to see her reaction was awesome, to see what that meant to her and the impact that it’s had on her life already.

However, after everyone went home that night, Brandt’s manager told her she needed to share her tip with her co-workers- something she said had never happened before during her time at the restaurant. Later, when Wise found out about it he called the restaurant and insisted the money be returned. It was, but shortly afterwards Brandt was fired.

When the Fox News outlet contacted Oven & Tap for a statement about terminating the server, they refused to disclose why she had been let go. Co-owner Mollie Mullis also denied that Wise had asked about the tipping policy in advance.

“Because we value our employees and highly respect their privacy, we never discuss personnel issues. The server who was terminated several days after the group dined with us was not let go because she chose to keep the tip money,” the restaurant said in a statement. “The other two servers who received generous tips that evening- including one who also received $2,200- are still members of our team,” it continued.

The restaurant also hired a public relations person to help manage some of the negative response it was getting. In a statement to The Washington Post, Natalie Ghidotti revealed that Oven & Tap had paid other employees who had worked that night roughly $7,000 “Because we feel the entire staff worked so hard that night to serve a large party of 32 people.”

In an interview with the Fox outlet, Brandt revealed she was let go for violating policy when she told Wise about the tip-pooling. As a result she’d been left with piling bills.

“It was devastating, I borrowed a significant amount for student loans. Most of them were turned off because of the pandemic but they’re turning back on in January and that’s a harsh reality,” she said.

That’s when Wise stepped in again, this time with a GoFundMe campaign to help get Brandt back on her feet.

“I do not personally know Ryan outside of her waiting on us in past Oven & Tap dinner outings. I do not know what type of employee she was outside of what I personally experienced and what we’ve read from other people commenting that were her regulars,” Wise wrote on the fundraiser’s page.

My only goal is to help her get through this experience with the least amount of stress and anxiety possible and onto whatever her next opportunity may be.

The campaign easily raised more than $8,000 and that next opportunity presented itself almost immediately as well: Brandt got a job at another restaurant. Shortly after, Wise closed down the fundraising page for exceeding the original goal.

Both Brandt and Wise were so blown away at how generous everyone had been with the fundraising page that they decided to open it again in mid-December. This time though, the money wasn’t going towards Brandt: it was going towards the next $100 Dinner Club night.

In January, we are going to host another $100 Dinner Club and I have invited Ryan to be our Guest of Honour! Any dollar amount raised over the $8,732 that has already been raised and is being paid out to Ryan will be given directly to the staff of the restaurant we decide to eat at.

Donations soared to more than $18,000, which means the group now has roughly $10,000 extra to tip with during their next night out. The response was so overwhelming that Wise once again shut down the page, proving that people everywhere want to help servers and others in the restaurant industry get back on their feet, too.

I’ll never forget this moment and I hope it inspires more people to host their own $100 Dinner Clubs! Grateful for everyone that helped us leave a $4400 tip. ❤️ pic.twitter.com/9rMCsRQJ8G

Helping your own community

While not everyone can afford to tip $100 when they dine out, it is nice to factor a generous tip into your final bill when possible. It’s standard practice for restaurants to pool tips or ask servers to share with the equally hard-working bartenders and cooks, many of which work for minimum wage and have been impacted hard by the constant closures during the pandemic. Because of that, anything extra is always appreciated, and it often goes a long way.

This story also reminds us that it’s not just important to tip when dining out; it’s also nice to tip when ordering food to your home. If you want to help out your local eatery always try and order directly from the restaurant rather than a delivery app (as they tend to charge the restaurants extra fees), or go and pick up your food instead.

Restaurants, servers, and everyone else in the industry have had a hard time managing the past couple of years, so ordering locally when you can and tipping well is an easy (and let’s be honest: delicious) way to give back.