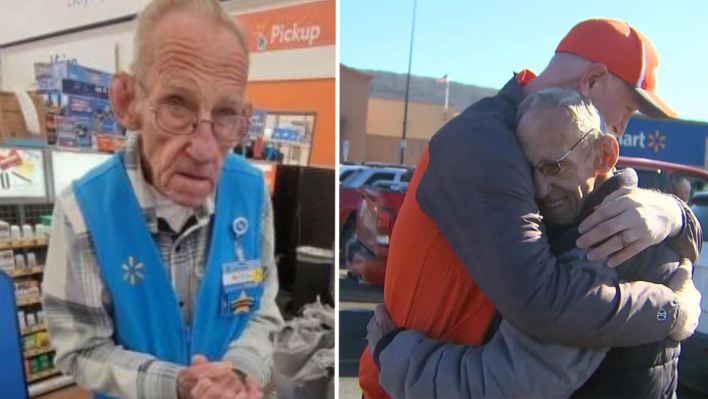 The elderly gentlemen could hardly believe it.
By Carl Wordsworth    January 24, 2023

The elderly gentlemen could hardly believe it.

Scrolling through online discourse these days, it’s easy to grow cynical of many social media platforms. There is no shortage of arguments denouncing these platforms for their shallow content, superficiality, and the self-obsession they can encourage.

However, one story that unfolded on popular app TikTok may restore some faith in the power of these platforms when used for good.

How a Stranger Helped an Elderly Man Retire

When one small business owner in Maryland encountered Warren Marion working at a Walmart, he decided to help him out in a unique and powerful way.

Rory McCarty is a small business owner of the extermination company Bug Boys, and also happens to have quite a large following on TikTok. His TikTok account, where he posts videos related to his work, has about 300,000 followers, and they all came together to change Warren’s life in a remarkable way.

After a video McCarty posted of the two of them racked up over 3 million views, he decided to start a GoFundMe page for Warren, who affectionately goes by the nickname ‘Butch.’

McCarty claims he was inspired by seeing other videos on TikTok, where short videos became launching pads for fundraisers for complete strangers. Such is the power of an app like TikTok.

RELATED: Walmart Employee Hears Nail Salon Refuse Service to a Disabled Woman – What She Does Next Is Surprising

On the GoFundMe page, McCarty said, “As a business owner … I was astounded seeing this little older man still grinding. Working eight to nine hour shifts.” He wanted to see if he too could generate the kind of money for Butch that he had seen generated for others on his TikTok feed, and posted a a 42-second video of their first interaction with the caption “has anybody seen the videos where a guy raised 180g’s to help an 82 yr old walmart employee retire. We ought to do that for Butch. Who would donate?”

In the video, Butch seems to be skeptical of the possibility, and is clearly surprised at the amount of money strangers were able to raise on an app. The response was overwhelming, and the campaign met its goals within days. McCarty returned to that Walmart a few days later to tell Butch the good news, who was in disbelief. Soon after, Butch gave his two weeks, and worked his last shift at Walmart.

How a TikTok Creator Used His Platform for Good

The story of McCarty and Butch doesn’t end there, however. The two quickly got national press coverage, as part of a larger trend of generosity taking over apps like TikTok — where users give money to strangers in need and film their reactions in order to spread positivity.

Local news media even captured the new retiree walking into the Walmart parking lot with balloons, greeted by applause. He told the Cumberland Times News in December that the funds would pay off his house and allow him to travel to Florida to see his children.

Butch is a Navy veteran, and believes that the encounter is a blessing for what he did in his younger years. The two have even struck up an unlikely friendship, and McCarty has continued to post videos to his TikTok account showing them hanging out.

One video shows Butch hopping in McCarty’s work truck, with the caption “Got my little buddy riding along with me today after just doing 3 interviews. Man he looks good in Bug Boy orange.” The two share an infectious bond, and the response on TikTok has been overwhelming.

“We’re like peas and carrots,” McCarty said. “As long as he likes to hang out with me, I’m going to be hanging out with him. I think it’s gonna be a long friendship.”

Another video shows Butch getting his first cell phone, part of his new lifestyle that the fundraising allowed. The video is one of many that captures Butch’s charisma, with countless comments showering the elderly gentleman with love.

Amidst videos of meaningless trends and pranks, content like this is a reminder of what we are capable of as a collective when we lead with empathy and generosity. Perhaps McCarty’s video will even inspire someone else around the world in the same way.