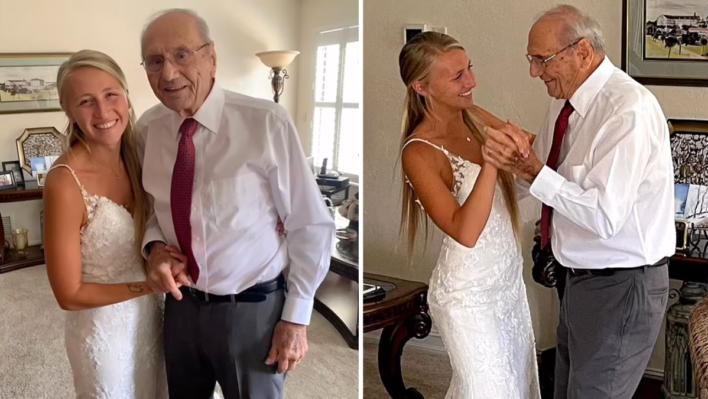 One newly married woman knew she wanted to have her first dance with only him.
By Lindsey Staub    November 12, 2022

One newly married woman knew she wanted to have her first dance with only him.

One bride wouldn’t let distance stop her from sharing a special first dance.

Natalie Browning, 24, had planned to share her first dance with her grandfather, 94-year-old Nelson May.

Why One Woman Traveled 800 Miles After Her Wedding

May was based in Florida and Browning in Virginia, so the plan was for May to travel 800 miles to attend his granddaughter’s wedding.

Unfortunately, a health problem occurred two weeks before the wedding, and May was no longer cleared to go.

May suffered from a stroke just weeks before the wedding and was deemed unable to travel. However, the bride wasn’t going to let distance or health problems interfere with her wish to share a first dance with her grandfather.

On August 1, 2021, Browning packed her wedding dress in a pink garment bag and applied makeup at the airport so that she could arrive at her grandfather’s home in Florida ready to recreate a special moment at the wedding he missed.

“For months he’d been so excited to dance with me on my wedding night and I’m just so happy that I was able to give him that experience,” Browning said. “I don’t get to see him very often so it truly was a special day.”

The touching video Browning posted showed her journey to Florida and her dance with her grandfather.

How One Bride Proved the Importance of Making Memories

That video was not the first thing Browning created that moved others; she knows a thing or two about how important it is to bring a smile to your loved ones’ faces.

“I run a small jewelry business called Of Great Value that is centered around reminding people that they are deeply valuable,” she said. “I’ve been trying to implement that belief more in my own life and wanted my grandpa to know that he is incredibly valuable to me, and even though he was unable to come to my wedding, that the dance he so desired to have with me was valuable too. So, we made it happen.”

RELATED: Guests Taken By Surprise When Dad Walking Daughter Down The Aisle Suddenly Stops And Does This

Even though an ailment made it so that May couldn’t make it to Browning’s wedding, Browning refused to let it stand in the way of their special moment.

May had been looking forward to their first dance for months, so Browning made sure that he would still get to experience it.

The extra time and money spent so that she could dance with her grandfather in his living room was worth putting that smile on his face. Sharing a touching moment like that with family, it’s priceless.

Groom Announces He Loves Someone Else at the Altar – Then, He Turns to Another Guest at the Wedding