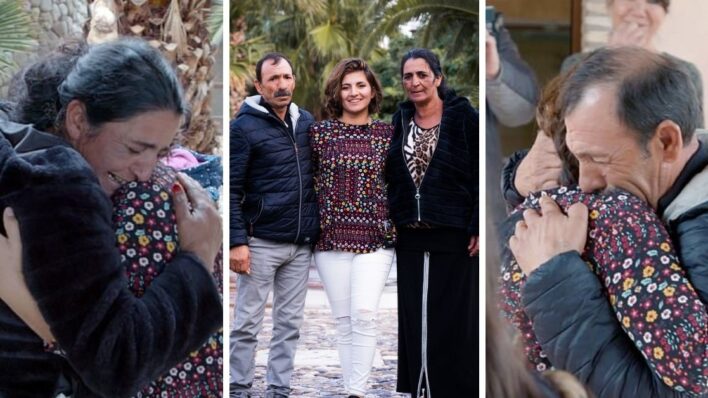 Belle Barbu always knew she was from Romania. When she decided to find her biological family, she discovered just how tragic the story of her birth is. Luckily, neither her nor her parents ever stopped looking for each other.
By Aly Walansky    September 24, 2020

Belle Barbu always knew she was from Romania. When she decided to find her biological family, she discovered just how tragic the story of her birth is. Luckily, neither her nor her parents ever stopped looking for each other.

Sometimes, having faith can lead to impossible feats of success – even when all hope is seemingly lost.

In late 2019, 25-year-old Belle Barbu traveled from her Washington home to Italy, where she would meet her birth family for the first time in her life.

It was a reunion that was 25 years in the making: the last time Belle’s birth parents had seen her was the day she was born in a Romanian hospital.

She was kidnapped in that same hospital but even more than two decades later, her parents never gave up hope of finding her.

Belle always wondered where she came from

Belle was raised by a family in Wisconsin, USA, but she was aware from a very young age that she was adopted from Romania. As a teenager she joined The Church of Jesus Christ of Latter-day Saints and went on a mission in Oregon.

Belle is estranged from her adopted Wisconsin family and now lives in Washington County. Wondering about her origins, she did some research on her background and where she came from. She ultimately decided to do a DNA test.

With a confirmation of her origins, she ended up going to a Facebook group dedicated to reuniting adopted Romanian children with their families. Belle told Deseret News, that the group had successfully reunited 500 adopted children with success.

Belle told the group members that her Romanian family was in Sadova, Romania. In less then 48 hours, they found her parents.

Yep, there’s one Romanian family — Barbu — let’s call them. They did and they were in Italy.

They told her parents she was dead

After the initial translated conversations with her family, Belle discovered the tragedy that had separated her from her parents.

I was literally taken from my parents like she was and taught a whole different life.

Belle had been born premature, but still healthy in a Romanian hospital. The doctors lied to her parents, telling them she had a heart condition. Then, they told them that their baby would stay in the hospital and that they’ll have to return for her in a few days.

When they returned a few days later, they were told that their baby had died. As it turns out, it was just another lie. A nurse told Belle’s parents the horrifying truth: the doctors had sold their daughter to be adopted in the United States.

Her parents never gave up on Belle

Belle’s parents were poor farmers who lived humbly. To this day, they live without running water. Despite their limited means, they still searched for their daughter everywhere they could.

For a year they looked for me but couldn’t find me because I was adopted out to the U.S.

With assistance from Tim Ballard, the founder of Operation Underground Railroad, an organization currently fighting child trafficking in 22 countries, they figured out that Belle had been a victim of human trafficking.

“They use the legitimate orphanage system, falsify the birth certificate, send the child to an orphanage, adopt it out and make a ton of money — around $15,000 to $20,000 a kid,” Ballard said. “A newborn is very valuable.”

When Belle shared her story with Operation Underground Railroad, they took an interest, and she and others made plans to travel to Italy and meet her family. The trip was partly funded by the organization, so it could make the reunion possible for all involved.

One of Belle’s biological siblings, a sister who was 9 years old when Belle was kidnapped, lived in Germany and couldn’t afford to make the trip. For 25 years, she too had been praying for Belle’s return.

“We couldn’t stand the thought of these sisters not being able to reunite after a 25-year-long nightmare because of money,” Ballard said. “At O.U.R., this is what we aim to do. First and foremost, we aim to reunite kidnapping victims, trafficked victims, with their lost families. So we volunteer to cover these costs.”

Her story helped other victims of child trafficking

“We know cases like this have been going on for years. Belle’s case is the tip of the iceberg,” he said. “By participating as we have in this case, a door had been opened now and we intend to walk in and we intend to find other lost children.”

The family reunited in Foggia, a city in Southern Italy, and Belle tearfully hugged her mother for the first time in her life. “I can’t even imagine the pain she went through,” Belle said of her mother.

My mom thought I was dead multiple times in her life and yet I’m alive giving her a hug. … It was such a blessing and to know they were excited to see me. I was so happy.