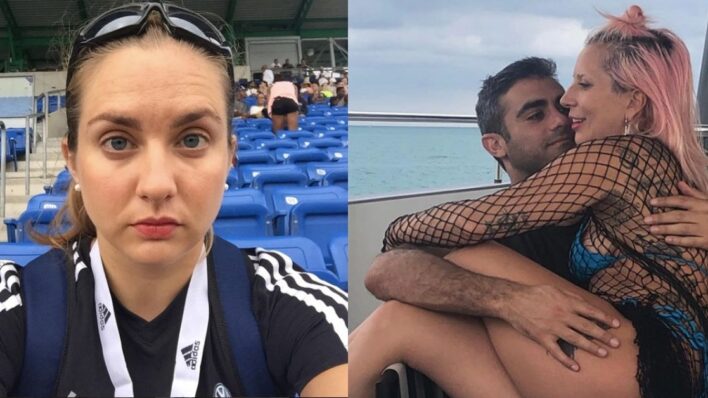 This Woman Found Out Her Ex-Boyfriend Is Dating Lady Gaga: Her Reaction Will Surprise You

When Lindsay Grouse discovered in a shocking way that her ex-boyfriend is dating Lady Gaga, she decided to find the postive in a wild situation.
By Shaoni Das    March 2, 2020

When Lindsay Grouse discovered in a shocking way that her ex-boyfriend is dating Lady Gaga, she decided to find the postive in a wild situation.

Being in and out of relationships is a natural part of adulthood. We meet people, we spend good times together, we make long-lasting memories, we open up our hearts to them, we fall in love, and most of the time, something or the other occurs and the relationship comes to an end.

And then we go again.

We’re all familiar with this cycle of falling in love with someone only to clutch at straws when we realize that the special connection we had formed with that special someone wasn’t special enough to last. And that’s okay. Sometimes we cope by reliving those memories — social media makes that easier.

We’re constantly surrounded by photos and updates of what our exes are up to, how they go on to live their lives without us, the new people they may or may not be dating. It is actually quite difficult to completely cut them out of our lives.

But writer Lindsay Crouse got the shock of a lifetime when she found her ex’s new girlfriend is Lady Gaga. She’s a ‘normal’ person by all accounts. Her ex-boyfriend too is seemingly a ‘normal person’. But the third person in this triangle? Lady Gaga.

Lady Gaga is one of the most famous stars on this planet, a bonafide A-list celebrity. Whether she’s dancing in pink leotards or wearing a meat dress to award shows or selling out stadium tours all over the world, all eyes are on her. She doesn’t dress normal, she doesn’t hang out with normal people, she doesn’t fly like normal people; Lady Gaga is out-of-this-world.

In this story published in The New York Times, Lindsay recalls being bombarded by texts and alerts when the news first broke. All the big tabloid magazines jumped at the chance to write about Lady Gaga’s new ‘normal’ beau.

Lindsay’s own mother began reading about this new romance after checking out a People magazine issue from her local library. When celebrities begin to date someone new, it’s hot, fresh gossip for most folks.

But the stakes were much, much more significant for Lindsay Crouse. She now had to worry about being upstaged by a legitimate star.

Instead of thinking, ‘Why not me?’ when I see them together, I think ‘That was me.’ It pulls the illusion of celebrity down.

Yet, Lindsay saw it as an opportunity to empower herself. Instead of being intimidated by Lady Gaga’s illustrious career, celebrity and fame, she turned the situation on its head to see her in a new light. Lady Gaga is not a goddess walking amongst mere humans; she’s just a woman daring to fall in love with a man.

Our culture has made it difficult for women to appreciate, respect and support other women. In this sort of situation, Lindsay could have easily fallen into patterns of jealousy and envy, but instead, she capitalized on this very unusual situation to examine her own life and begin treating herself as though she herself was a celebrity.

This woman put herself in Lady Gaga’s shoes & it worked

Lindsay reveals that comparing herself to Lady Gaga was actually motivational for her. If Lady Gaga dared to live her life in the most exquisite, confident way, then what was stopping Lindsay?

So Lindsay bought an expensive dress, even though it was out of her budget. She chose to get her make-up done by a professional. She did the work presentation she’d been avoiding. She adopted the same confidence and self-love that Lady Gaga has in spades and decided to treat herself to all the best things.

Something must be said about her approach to life and love if she is willing to embrace self-love in such a positive way upon discovering her ex is dating Lady Gaga. She didn’t pout around, she didn’t feel ashamed — she chose to take on new challenges, say yes to new experiences and love herself in a way she hadn’t before.

If that isn’t the best way to move on from a former relationship, we don’t know what it is. Most of us are probably not going to end up being celebrities but that shouldn’t stop us from living like one.