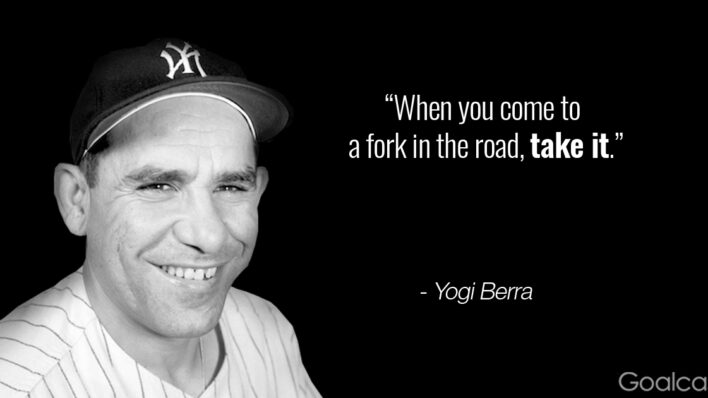 60 Yogi Berra Quotes That Are Both Funny and Inspiring

Born Lawrence Peter Berra, Yogi Berra was a baseball legend. One of the greatest catchers in MLB history, Berra was
By Flavia Medrut    June 3, 2018

One of the greatest catchers in MLB history, Berra was the three times winner of the American League Most Valuable Player Award, won 10 World Championships as a player and boasts another 18 All-Star wins.

Berra was born in a family of Italian immigrants. He fell in love with sports ever since he was a little boy. And although he had to drop out of school to help his family, he still found time to develop his talent as a baseball player.

If you’re wondering about the origins of Berra’s nickname, the famous player was first called “Yogi” by a childhood friend who told him that he sat like an Indian snake charmer after losing a game.

Yogi Berra was also widely known for his malapropisms. His comments on life and baseball, also known as “Yogi-isms”, were published in Bartlett’s Familiar Quotations — the most widely distributed collection of quotes.

Here are 60 funny Yogi Berra quotes that will make you laugh and learn some valuable lessons in life: The future ain’t what it used to be.

If you don’t know where you are going, you might wind up someplace else.

It was a once in a lifetime opportunity, and I’ve had a couple of those.

I guess the first thing I should do is thank everybody who made this day necessary.

There are some people who, if they don’t already know, you can’t tell ’em.

Why be jealous over things you don’t have?

People seem to find it hard to believe, but I’m a very serious person. It wasn’t luck that I became a ballplayer.

There are a lot of things in life you can’t control, but how you respond to things that you CAN control.

If the world were perfect, it wouldn’t be.

The game is simple, but it’s never easy.

I’m lucky. Usually you’re dead to get your own museum, but I’m still alive to see mine.

In theory there is no difference between theory and practice; in practice there is

You wouldn’t have won if we’d beaten you.

You should always go to other people’s funerals. Otherwise, they won’t come to yours.

If you can’t imitate him, don’t copy him.

I never said most of the things I said. Then again, I might have said ’em, but you never know.

A nickel ain’t worth a dime anymore.

I can’t think and hit at the same time.

We made too many of the wrong mistakes.

Little League baseball is a very good thing because it keeps the parents off the streets.

Don’t write this, but even if they beat us tomorrow, we’re the better club.

The other teams could make trouble for us if they win.

I can see how he (Sandy Koufax) won twenty-five games. What I don’t understand is how he lost five.

I never blame myself when I’m not hitting. I just blame the bat and if it keeps up, I change bats. After all, if I know it isn’t my fault that I’m not hitting, how can I get mad at myself?

I knew the record would stand until it was broken.

He hits from both sides of the plate. He’s amphibious.

That’s how I kept myself positive, by not getting all negative.

I’m not going to buy my kids an encyclopedia. Let them walk to school like I did.

Why buy good luggage? You only use it when you travel.

No matter where you go, there you are.

The towels were so thick there I could hardly close my suitcase.

Half the lies they tell about me aren’t true.

I knew I was going to take the wrong train, so I left early.

You better cut the pizza in four pieces because I’m not hungry enough to eat six.

I usually take a two-hour nap from one to four.

Yogi Berra sayings to inspire you

Nobody can be all smiley all the time, but having a good, positive attitude isn’t something to shrug off.

We have a good time together, even when we’re not together.

To say that I don’t have any worries or nerves is the opposite of the truth. I worry about not being able to get around on the fast ball any more, I worry about getting hurt and having to quit playing before my time.

If you ask me anything I don’t know, I’m not going to answer.

The game is supposed to be fun. If you have a bad day… don’t worry about it. You can’t expect to get a hit every game.

Today, if things are going wrong around the house, maybe it’s a good day to work on the lawn or paint the shutters. You can observe a lot by watching.

I never dreamed we’d accomplish so much, but hunger accomplishes a lot of things.

It’s pretty far, but it doesn’t seem like it.

I try to accomplish something each day. When you come to a fork in the road, take it.

Baseball is 90 percent mental and the other half is physical.

Baseball is a game of confidence, and over coming failures and fears. That’s what life’s about too.

But it don’t bother me. I never yet saw anybody hit the baseball with their face. Besides, I like to get kidded; that means they like me. When they stop kidding me, I’m in trouble.

You don’t have to swing hard to hit a home run. If you got the timing, it’ll go.

In baseball, you don’t know nothing.

If I didn’t make it in baseball, I won’t have made it workin’. I didn’t like to work.

Love is the most important thing in the world, but baseball’s pretty good, too.