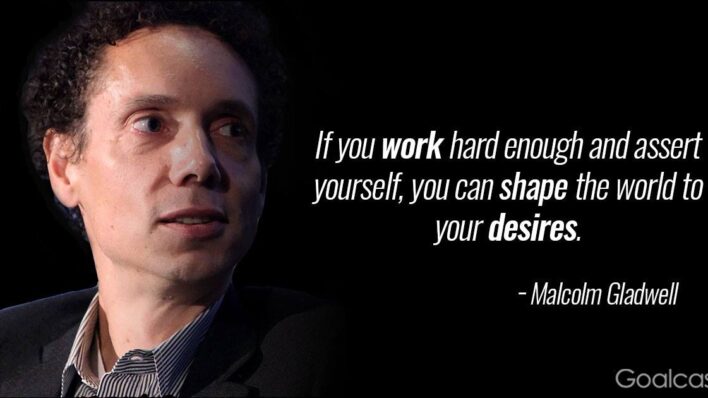 Malcolm Gladwell (born September 3, 1963) is an English-born Canadian journalist, author, and speaker. Gladwell was not the brightest student,
By Flavia Medrut    December 10, 2017

Malcolm Gladwell (born September 3, 1963) is an English-born Canadian journalist, author, and speaker. Gladwell was not the brightest student,

Malcolm Gladwell (born September 3, 1963) is an English-born Canadian journalist, author, and speaker. Gladwell was not the brightest student, his grades were not high enough for him to graduate school, so he decided to pursue a career in advertising instead. He has been rejected from many agencies, but was finally accepted as a journalist at The American Spectator.

In his work, Gladwell seeks to combine interesting stories with interesting research. He is the author of 5 memorable books, some of them — like Blink or Outliers — being often quoted among the best non-fiction books on the shelf. I personally haven’t had the chance to read any of them, but I do have a personal favorite article – “The Talent Myth” – a research paper that explores incorrectly used managerial and administrative techniques. Malcom Gladwell says that inexperienced employees are promoted too soon, while the experienced ones don’t get the chance to rise. He also thinks that narcissists are more likely to climb the ladder, and they turn out to be the worst leaders. No need to explain why.

Here are 18 Malcolm Gladwell quotes to help you get rid of the fear of making a fool of yourself and rethink the path to success. Take a peek into the mind of a man of great achievements. The key to good decision making is not knowledge. It is understanding. We are swimming in the former. We are desperately lacking in the latter.

We have, as human beings, a storytelling problem. We’re a bit too quick to come up with explanations for things we don’t really have an explanation for.

Who we are cannot be separated from where we’re from.

Those three things – autonomy, complexity, and a connection between effort and reward – are, most people will agree, the three qualities that work has to have if it is to be satisfying. If you work hard enough and assert yourself, and use your mind and imagination, you can shape the world to your desires.

Achievement is talent plus preparation.

Insight is not a light bulb that goes off inside our heads. It is a flickering candle that can easily be snuffed out.

To be someone’s best friend requires a minimum investment of time. More than that, though, it takes emotional energy. Caring about someone deeply is exhausting.

It would be interesting to find out what goes on in that moment when someone looks at you and draws all sorts of conclusions.

Truly successful decision-making relies on a balance between deliberate and instinctive thinking.

In the act of tearing something apart, you lose its meaning.

There can be as much value in the blink of an eye as in months of rational analysis.

The older I get, the more I understand that the only way to say valuable things is to lose your fear of being correct.

We don’t know where our first impressions come from or precisely what they mean, so we don’t always appreciate their fragility.

Consistency is the most overrated of all human virtues… I’m someone who changes his mind all the time.

We aren’t, as human beings, very good at acting in our best interest.

I try to be unafraid of making a fool of myself.

And a bonus one, to wrap things up in a very Malcolm Gladwell way: