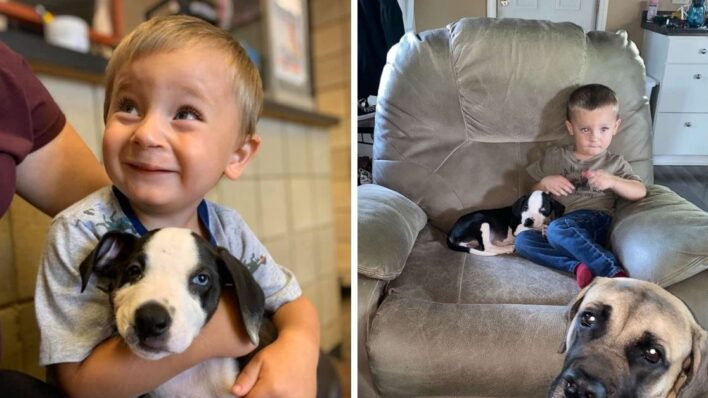 Being born different can take a toll on children and parents are well aware of that. Brandon Boyers’ 2-year-old son

Being born different can take a toll on children and parents are well aware of that. Brandon Boyers’ 2-year-old son

Being born different can take a toll on children and parents are well aware of that. Brandon Boyers’ 2-year-old son Bentley was born with a cleft lip, a condition that can occur when tissues do not join correctly during development.

This results in an opening in the upper lip, which can sometimes reach all the way to the nose. While it can be rectified through surgery, it still leaves behind a visible scar.

One day, when Brandon visited the Jackson County Animal Shelter looking to adopt some chickens, he came a cross a very special puppy. Immediately, he thought of his son.

Brandon’s wife, Ashley, learned of her son’s condition 20 weeks into the pregnancy, after an ultrasound revealed that Bentley would be born with a cleft lip. Since his birth, he has had 2 surgeries to correct the condition.

Despite the difficulties of his condition, Bentley never lost his spirit.

When he was first born he struggled eating, he was in the NICU but ever since his surgery he’s completely fine. He is the best kid ever. If you go outside to do chores, he gets upset if you don’t ask for his help.

At the animal shelter, Brandon called Ashley as soon as he saw the puppy with a cleft lip, just like his son. “I said, ‘I want her for the sake of Bentley,'” Ashley Boyers told Good Morning America.

The Boyers officially adopted the puppy on September 4th. As soon as Bentley saw her, they immediately connected.

“When Bentley came in to meet the puppy, we had tears in our eyes,” said Lydia Sattler, animal services director of Jackson County Animal Shelter. “He was loving her and she was just eating it up. They were a perfect match for many reasons.”

They’re the best of friends. If Bentley is playing on the playground she’s next to the slide waiting for him to come down. They do everything together.

They named the puppy Lacey, and now the two are inseparable.

With Lacey, Bentley would grow up feeling less alone in his difference. Both Brandon and Ashley jumped on the chance to make their child feel comfortable in his own skin and ensure that he will grow up to embrace his difference.

As parents, it’s important to create an environment where children feel honoured in their differences and strengths. Whether it’s through a puppy or small actions of encouragement, it all counts to help them grow into the best versions of themselves.