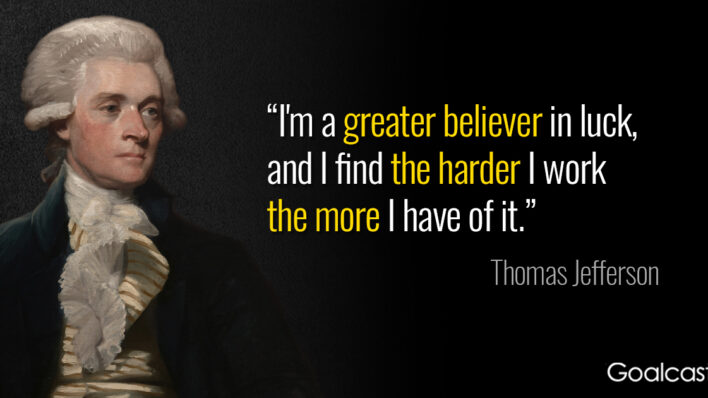 Thomas Jefferson was one of the American Founding Fathers and the primary author of the Declaration of Independence. He served
By Flavia Medrut    February 19, 2018 Thomas Jefferson was one of the American Founding Fathers and the primary author of the Declaration of Independence. He served as the third President of the United States  between 1801 and 1809.

Jefferson began his political career at the age of 25, after completing his studies. Shortly after drafting the Declaration of Independence, he penned another significant democratic document — The Virginia Statute for Religious Freedom, which established the separation of church and state.

One of Jefferson’s major contributions as the President of the United States was completing the purchase of Louisiana from the French, an action that doubled the size of the nation. He also deployed new American war ships, which forced the Barbary pirates to capitulate, ending a huge problem related to the shipping industry.

He was a dominant political figure who had a major impact on the future of the United States. Here are 20 Thomas Jefferson quotes to help you build stronger principles. Do you want to know who you are? Don’t ask. Act! Action will delineate and define you.

Honesty is the first chapter of the book wisdom

It does me no injury for my neighbor to say there are twenty gods or no god. It neither picks my pocket nor breaks my leg.

I’m a greater believer in luck, and I find the harder I work the more I have of it.

I hold it that a little rebellion now and then is a good thing, and as necessary in the political world as storms in the physical. I like the dreams of the future better than the history of the past.

We hold these truths to be self-evident: that all men are created equal; that they are endowed by their Creator with certain unalienable rights; that among these are life, liberty, and the pursuit of happiness.

The care of human life and happiness, and not their destruction, is the first and only object of good government.

I believe that every human mind feels pleasure in doing good to another.

I never considered a difference of opinion in politics, in religion, in philosophy, as cause for withdrawing from a friend.

Never spend your money before you have earned it.

To penetrate and dissipate these clouds of darkness, the general mind must be strengthened by education. Only aim to do your duty, and mankind will give you credit where you fail.

Peace and friendship with all mankind is our wisest policy, and I wish we may be permitted to pursue it.

Do not bite at the bait of pleasure, till you know there is no hook beneath it.

Errors of opinion may be tolerated where reason is left free to combat it.