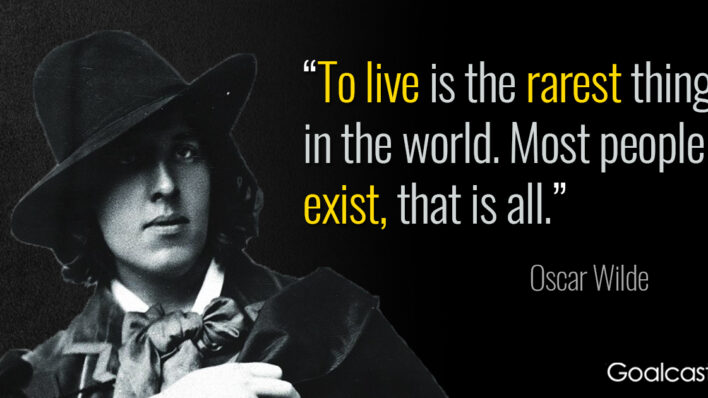 Famous and Funny Oscar Wilde Quotes About Love, Life and Death That Will Make Your Smile and Think.
By Flavia Medrut    March 6, 2018

Famous and Funny Oscar Wilde Quotes About Love, Life and Death That Will Make Your Smile and Think.

Oscar Wilde was an Irish poet and playwright, best known for work such as The Picture of Dorian Gray and The Importance of Being Earnest.

Many of Wilde’s plays were satirical comedies. Each comedy mocked the Victorian society, making fun of London’s social hierarchy and the masks worn by the Upper Crust — the social class composed of the wealthiest members of society.

Oscar Wilde lived an extravagant life, got married, became a father, and had a love affair with a young man named Alfred Douglas. (I believe this was the order of the events.)

Besides his great literary work, Wilde is highly remembered for his flamboyant style and infamous imprisonment for his homosexuality.

RELATED: 14 Pablo Neruda Quotes That Will Melt Your Heart

In love with the principles of aestheticism — “art for art’s sake” — Oscar Wilde put on paper some undeniably beautiful work and some really meaningful sayings. You don’t love someone for their looks, or their clothes, or for their fancy car, but because they sing a song only you can hear.

Keep love in your heart. A life without it is like a sunless garden when the flowers are dead.

Never love anyone who treats you like you’re ordinary.

The very essence of romance is uncertainty.

I see when men love women. They give them but a little of their lives. But women when they love give everything.

Who, being loved, is poor?

Between men and women there is no friendship possible. There is passion, enmity, worship, love, but no friendship.

To love oneself is the beginning of a lifelong romance.

Women love us for our defects. If we have enough of them, they will forgive us everything, even our gigantic intellects.

I really don’t see anything romantic in proposing. It is very romantic to be in love. But there is nothing romantic about a definite proposal.

Romance should never begin with sentiment. It should begin with science and end with a settlement.

Men always want to be a woman’s first love. That is their clumsy vanity. We women have a more subtle instinct about things.

When a man has once loved a woman he will do anything for her except continue to love her.

There is always something ridiculous about the emotions of people whom one has ceased to love.

Any place you love is the world to you.

Deceiving others. That is what the world calls a romance.

The heart was made to be broken.

True love suffers, and is silent. I remember myself once — But it is no matter now. Romance is a thing of the past.

The things one feels absolutely certain about are never true. That is the fatality of faith, and the lesson of romance.

There is no such thing as romance in our day, women have become too brilliant; nothing spoils a romance so much as a sense of humor in the woman.

It takes great deal of courage to see the world in all its tainted glory, and still to love it.

The worst of having a romance of any kind is that it leaves one so unromantic.

Lo! with a little rod I did but touch the honey of romance — And must I lose a soul’s inheritance?

I had buried my romance in a bed of asphodel.

Somehow, I had never loved a woman. I suppose I never had time. Perhaps, as Harry says, a really grande passion is the privilege of those who have nothing to do, and that is the use of the idle classes in a country To live is the rarest thing in the world. Most people exist, that is all.

Life is far too important a thing ever to talk seriously about.

We live in an age when unnecessary things are our only necessities.

We are all in the gutter, but some of us are looking at the stars.

Anyone who lives within their means suffers from a lack of imagination.

The truth is rarely pure and never simple.

Live! Live the wonderful life that is in you! Let nothing be lost upon you. Be always searching for new sensations. Be afraid of nothing!

To define is to limit.

Yes, I am a dreamer. For a dreamer is one who can only find his way by moonlight, and his punishment is that he sees the dawn before the rest of the world.

Behind every exquisite thing that existed, there was something tragic.

Humanity takes itself too seriously. It is the world’s original sin. If the cave-man had known how to laugh, History would have been different.

I don’t want to earn my living, I want to live. A good friend will always stab you in the front.

Education is an admirable thing, but it is well to remember from time to time that nothing that is worth knowing can be taught.

A cynic is a man who knows the price of everything, and the value of nothing.

Every saint has a past, and every sinner has a future.

I don’t want to be at the mercy of my emotions. I want to use them, to enjoy them, and to dominate them.

Man is least himself when he talks in his own person. Give him a mask, and he will tell you the truth.

The world is divided into two classes, those who believe the incredible, and those who do the improbable.

We are each our own devil, and we make this world our hell.

Be yourself; everyone else is already taken.

Always forgive your enemies; nothing annoys them so much.

Experience is merely the name men gave to their mistakes.

I have the simplest tastes. I am always satisfied with the best.

Everything in the world is about sex except sex. Sex is about power.

I can resist anything except temptation.

I am not young enough to know everything.

He must have a truly romantic nature, for he weeps when there is nothing at all to weep about.

I am so clever that sometimes I don’t understand a single word of what I am saying.

The public is wonderfully tolerant. It forgives everything except genius.

I don’t want to go to heaven. None of my friends are there.

The only thing to do with good advice is pass it on. It is never any use to oneself.

Morality is simply the attitude we adopt towards people whom we personally dislike.

All women become like their mothers. That is their tragedy. No man does, and that is his.

If you want to tell people the truth, make them laugh, otherwise they’ll kill you.

To get back my youth I would do anything in the world, except take exercise, get up early, or be respectable.

I may not agree with you, but I will defend to the death your right to make an ass of yourself.

Work is the curse of the drinking classes.

There are only two tragedies in life: one is not getting what one wants, and the other is getting it.

When I was young I thought that money was the most important thing in life; now that I am old I know that it is.

My wallpaper and I are fighting a duel to the death. One of us has got to go.

Only dull people are brilliant at breakfast.

Death must be so beautiful. To lie in the soft brown earth, with the grasses waving above one’s head, and listen to silence. To have no yesterday, and no tomorrow. To forget time, to forgive life, to be at peace.

I want the dead lovers of the world to hear our laughter, and grow sad. I want a breath of our passion to stir dust into consciousness, to wake their ashes into pain.

All trials are trials for one’s life, just as all sentences are sentences of death.

One can survive everything, nowadays, except death, and live down everything except a good reputation.

Most people die of a sort of creeping common sense, and discover when it is too late that the only things one never regrets are one’s mistakes.

To live is the rarest thing in the world. Most people exist, that is all.

For he who lives more lives than one, more deaths than one must die.

We quaff the cup of life with eager haste without draining it, instead of which it only overflows the brim – objects press around us, filling the mind with the throng of desires that wait upon them, so that we have no room for the thoughts of death.

A thing is not necessarily true because a man dies for it. 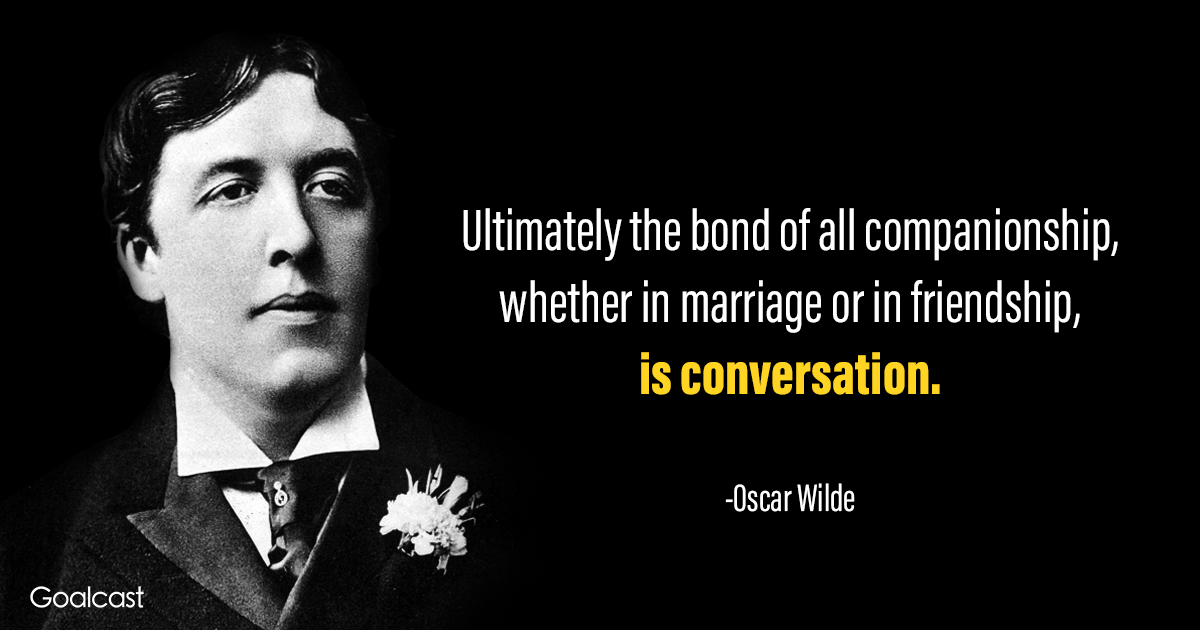 How can a woman be expected to be happy with a man who insists on treating her as if she were a perfectly normal human being.

Ultimately the bond of all companionship, whether in marriage or in friendship, is conversation.

There is nothing in the world like the devotion of a married woman. It is a thing no married man knows anything about.

The man who says his wife can’t take a joke, forgets that she took him.

One should always be in love. That is the reason one should never marry.

The proper basis for marriage is a mutual misunderstanding.

They spoil every romance by trying to make it last forever.

Dammit Sir, it’s your duty to get married. You can’t always be living for pleasure!

Marriage is the one subject on which all women agree and all men disagree.

How marriage ruins a man! It is as demoralizing as cigarettes, and far more expensive.

To speak frankly, I am not in favor of long engagements. They give people the opportunity of finding out each other’s character before marriage, which I think is never advisable.

Bigamy is having one wife too many. Monogamy is the same.

Women are meant to be loved, not to be understood.

You will always be fond of me. I represent to you all the sins you never had the courage to commit.

I know what conscience is, to begin with […] It is the divinest thing in us […] I want to be good. I can’t bear the idea of my soul being hideous.

Beauty, real beauty, ends where an intellectual expression begins. Intellect is in itself a mode of exaggeration, and destroys the harmony of any face.

Each of us has heaven and hell in him.

There are many things that we would throw away if we were not afraid that others might pick them up.

Some things are more precious because they don’t last long.

There is a luxury in self-reproach. When we blame ourselves, we feel that no one else has a right to blame us. It is the confession, not the priest that gives us absolution.

Laughter is not at all a bad beginning for a friendship, and it is far the best ending for one.