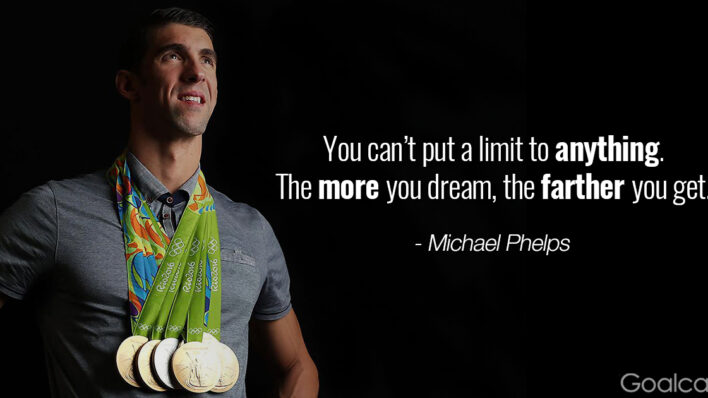 23 Michael Phelps Quotes to Unlock the Champion Within

Since I was little, I’ve always loved watching the Olympics. That same Olympic theme song, the NBC logo, and Bob
By Matt Valentine    November 9, 2017

Since I was little, I’ve always loved watching the Olympics.

That same Olympic theme song, the NBC logo, and Bob Costas voice give me an involuntary feeling of comfort probably solely because of it. I can connect various (mostly Summer) Olympic games with memorable times in my life, further adding to that sense of nostalgia and comfort.

But, most of all, the idea that many of the world’s greatest athletes– high performers period– were brought together in one place to duke it out has always been fascinating to me. And one of the greatest of those champions, perhaps the greatest Olympian of all time, is Michael Phelps.

In his Olympic career, Michael Phelps amassed twenty-eight medals – an incredible twenty-three of those being gold – both all-time Olympic records. Remarkably, he did so over the course of four Olympic games spanning twelve years (not including training time before that).

Michael Phelps has proven himself to be one of the greatest athletic champions of all time. Here are twenty-three quotes of wisdom from Phelps on high-performance, passion, and persistence to match his illustrious twenty-three gold medals. 23 Michael Phelps Quotes to Unlock the Champion Within

If you say can’t you’re restricting what you can do or ever will do.

It doesn’t matter what else is going on. When you walk into your arena or your – whatever you excel at — you’re there to take care of the job that you have to do.

If I didn’t swim my best, I’d think about it at school, at dinner, with my friends. It would drive me crazy.

There are always going to be obstacles that come in your way, stay positive.

People say to me, You’re so lucky. You get to see the world. But I don’t. I go to the hotel and the pools and back again. That’s it.

You can’t put a limit to anything. The more you dream, the farther you get. I feel most at home in the water. I disappear. That’s where I belong.

With so many people saying it couldn’t be done, all it takes is an imagination.

I wouldn’t say anything is impossible. I think that everything is possible as long as you put your mind to it and put the work and time into it.

When I feel tired, I just think about how great I will feel, once I finally reach my goal.

Every day after I wake up, I think, ‘Wait… this can’t be real; I’m still going to wake up.’

Things won’t go perfect. It’s all about how you adapt from those things and learn from mistakes.

I found something I love… and never gave up! You have to have a dream so that you can get up in the morning.

I want to be able to look back say, I’ve done everything I can, and I was successful. I don’t want to look back and say I should have done this or that. I’d like to change things for younger generation of swimmers coming along.

I think goals should never be easy, they should force you to work, even if they are uncomfortable at the time.

It’s cool just because I’ve had this dream of changing the sport of swimming and it’s finally happening.

If you want to be the best, you have to do things that other people aren’t willing to do.

I want to test my maximum and see how much I can do. And I want to change the world of swimming.

I won’t predict anything historic. But nothing is impossible.

It’s cool just because I’ve had this dream of changing the sport of swimming and it’s finally happening.

So many people along the way, whatever it is you aspire to do, will tell you it can’t be done. But all it takes is imagination. You dream. You plan. You reach. There will be obstacles. There will be doubters. There will be mistakes. But with hard work, with belief, with confidence and trust in yourself and those around you, there are no limits.