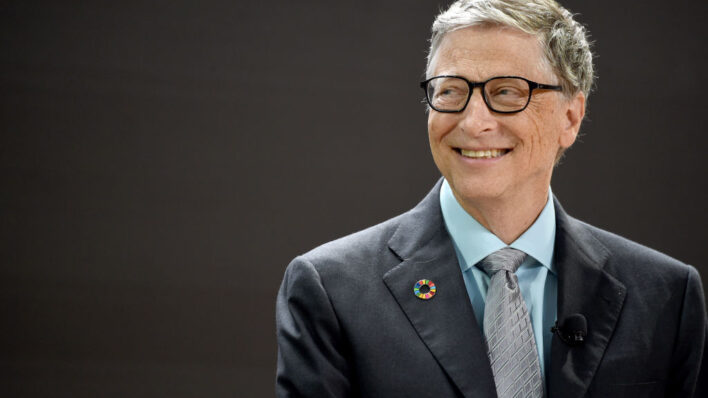 At 13 years old, a skinny teen began working on his very first computer. He spent hours hunched over the
By Jenny Medeiros    August 24, 2018

At 13 years old, a skinny teen began working on his very first computer. He spent hours hunched over the machine, utterly entranced with what it could do. Before long, he had taught himself to code and developed a program which let people play tic-tac-toe against the computer.

Fast-forward to his college days, the smarter than average 18-year-old dropped out of Harvard University to start a company called ‘Micro-Soft’ (Microcomputer and Software) with his long-time friend, Paul Allen.

At the time, neither the boys nor their disappointed parents could have ever imagined that that company would become the world’s largest software business. As you know, that teen was billionaire entrepreneur and outstanding philanthropist Bill Gates.

With a knack for business and a passion for helping others, Gates is a living inspiration to budding entrepreneurs around the world. Here are some of his greatest lessons on life and leadership for you to learn from.

Determine a goal and never stop

In his commencement speech at Harvard in 2007, Gates told the graduating class, “Determine a goal, find the highest-leverage approach, discover the ideal technology for that approach, and in the meantime, make the smartest application of the technology that you already have…The crucial thing is to never stop thinking and working.”

Focusing on what you want and working towards it at every opportunity is the only way to reach your goals. No matter if it’s a new company or personal improvement, you will only make progress by throwing your heart and soul into it and never looking back.

Gates told the Daily Mail that he “never took a day off in his twenties.” While you may already be past your twenties, working hard is not age-specific and far from being an excuse to give up on your dreams.

“If you don’t build your dreams, someone else will hire you to build theirs.” – Bill Gates

When Bill Gates dropped out of Harvard to pursue his wild business idea, he was gambling with his future. He took a massive risk but made it work through patience, careful planning, and perseverance.

Not everyone has the luxury of taking such risks in life, but there is rarely a perfectly built bridge between where you are and where you want to be. There is always a leap to be made, and sometimes you just have to push your doubts to the side and jump.

“To win big, sometimes you have to take big risks” – Bill Gates

Six months before his mother lost her battle with breast cancer, she wrote a letter to Gates’ wife ending with the words: “From those to whom much is given, much is expected.”

Gates never forgot his mother’s words and they led him to co-create the Bill & Melinda Gates Foundation. He and his wife also partnered with Warren Buffet to create The Giving Pledge, a campaign to convince the world’s wealthiest to give away the majority of their fortunes during their lifetimes. Even today, Bill Gates spends his days working to fund admirable causes ranging from education to eradicating Polio.

It’s always refreshing to see a billionaire who isn’t overcome with greed and prefers to share his wealth with those who are at a disadvantage. It serves as a reminder that money isn’t everything in life. After all, what is a great leader if not someone who helps others grow too? As Gates puts it,

“Until we’re educating every kid in a fantastic way, until every inner city is cleaned up, there is no shortage of things to do.”

You don’t revolutionize the IT world and become one of the richest people in the world without failing countless times along the way.

When Bill Gates was 15 years old, he and his friend Paul Allen started their first business with a program that tracked traffic in Seattle. The venture was a complete disaster, but it never stopped Gates from innovating again with Microsoft just a few years later.

Here’s a quote from Gates you’ll likely enjoy, “I failed in some subjects in exam, but my friend passed in all. Now he is an engineer in Microsoft and I am the owner of Microsoft.”

The lesson is to believe in yourself, stop comparing your life to others, and embrace the simple fact that failure is merely the first step towards success.

The life you create and design for yourself is going to accumulate from the choices you make over time. Sure, there are unexpected things that can derail dreams. But we can control where we put our focus, and if we choose to put one dream ahead of another.