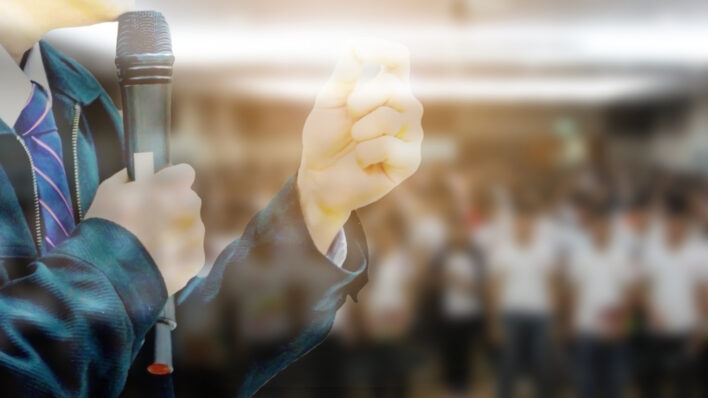 4 Things the Best Public Speakers in the World Do There are only two types of speakers in the world. 1. The nervous and 2. Liars.

Most people hate the idea of speaking in public. Countless strangers staring in your direction, waiting for you to say something profound, or worse, to fail miserably so that they can laugh at your expense.

The truth is, no-one is waiting for you to fail up there. Instead, the audience is in a default state of empathy and wants you to do well — that’s why you tend to feel embarrassed when someone else makes a mistake on stage.

You might hate public speaking, but you’re likely already doing it more often than you think. If you ever need to run a meeting, teach something to a group of people, or tell a story to a bunch of kids riding in the back of your minivan – you have an audience.

But ask someone to volunteer to speak for 30 minutes straight in front of 50 people, and you’ll see few hands being raised. Most of it is fear of the seemingly unknown – humans are naturally risk averse, so it’s logical to avoid situations of potential failure. It’s precisely these moments however, where we can achieve the most personal growth.

Abraham Lincoln used to be terrified of speaking in front of large crowds. Warren Buffett didn’t even like to say his name in front of his classmates. But speaking to groups is a requirement of success, so how can this irrational fear be turned into a feeling of excitement and elation?

Don’t try to memorize your talk

A lot of stress can come from trying to anticipate exactly what you’re supposed to say next, and worrying about what you may have missed.

Sure, our Presidents deliver speeches off of teleprompters, but what did orators do before those nifty devices existed?

Break up your presentation into blocks of points that you’d like to get across. Your brain is better at remember concepts, and you can always use visual cues to trigger them.

Structure your presentation as a story

It’s easier to captivate an audience with a story because we’re all very familiar with that format.

Have a clear introduction, climax, and conclusion around the topic you’re discussing.

Whenever possible use short stories as examples throughout your presentation. Stories are simpler to remember (both for you and the listener) and can often have the biggest impact on the perceived quality of your talk.

This does not include slides with endless bullet points. A wall of text has no additive value in a presentation, and is likely to distract from what you’re saying.

Visual cues, however, like images and easily digestible graphs can help get your point across.

They can also act as a tool to reel your listeners back in if you do happen to lose them while describing something relatively complex.

Professional athletes look composed in front of thousands of fans because they practice every play to anticipate any scenario every single day.

Practice delivering your entire talk at least three times before you do it in front of an audience. By the time you get up on stage, your content will feel familiar and you will feel more at ease.

Billionaire Marc Benioff, founder of Salesforce.com, is known for delivering highly captivating presentations. Even at his level, he has been interviewed saying that he’ll practice a talk up to 30 times before doing it in public.

The feeling of speaking in front of an engaged audience can be intoxicating. There’s nothing more rewarding than hearing a fan say that your stories may have changed the direction of their life.

Next time you hear someone looking for presenters, do raise your hand – the worst that can happen is you’ll pick up a useful new skill along the way.