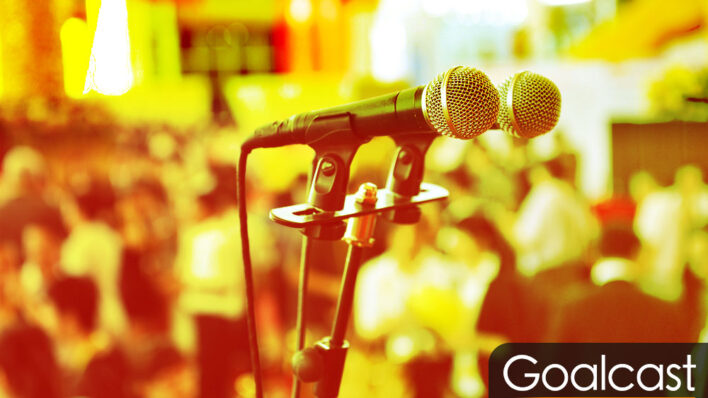 5 Tips for Overcoming Your Fear of Public Speaking

Here at Goalcast we’re constantly striving toward self-improvement and personal fulfillment; while this can be a deeply gratifying practice, like
By Matt Valentine    January 4, 2018

Here at Goalcast we’re constantly striving toward self-improvement and personal fulfillment; while this can be a deeply gratifying practice, like

Here at Goalcast we’re constantly striving toward self-improvement and personal fulfillment; while this can be a deeply gratifying practice, like anything else, it comes with its own set of challenges — including overcoming inherent fears we’ve been holding onto.

So with that in mind, we thought, why not — on the scariest week of the year — try the self-deemed impossible: face our biggest, smallest or most nagging fear and take the right steps to overcome it. Welcome to #GoalcastFearChallenge.

Imagine speaking in front of a crowd of one thousand people.

Scared yet? If so, you’re in the right place.

Like a lot of people, I had a fear of public speaking. Also like a lot of you, especially young entrepreneurs who frequent conferences in your space, I’ve been asked to speak publicly.

But for those of us with a fear of public speaking, giving a great speech isn’t your biggest concern: it’s getting over the fear of it just to get yourself onto the stage and utter a single word.

And, to that end, I offer some tips that have helped me go from being fearful to highly confident with standing in front of a large crowd. I used to be incredibly afraid of public speaking. I started with five people, then I’d speak to 10 people. I made it up to 75 people, up to 100, and now I can speak to a very large group, and it feels similar to speaking to you one-on-one.

I used to be deathly afraid of public speaking. However, I was lucky enough to get quite a bit of practice early on that has helped me develop a lot of confidence speaking in front of a large group.

I know how scary it can be, but there really is a lot that you can do to gain the confidence you need to stand in front of a crowd. And, to that end, here are five tips to help you overcome your fear of public speaking:

Whether your speech is simple or complex, it’s critical that you get all preparation out of the way well before the date of your speech. If you wait too long, the stress of having to prepare everything will mount on top of the fear of having to go on stage and this will magnify the fear further.

Please do yourself a favor and don’t treat this like a high school exam– do it early, prepare thoroughly, and get all speech materials and preparations out of the way now so you can offer one less thing to the Furnace of Fear.

This is one of the most important points on this list. Practice itself is critical for overcoming the fear of public speaking because it’s practice that, in ample quantity, gives us the confidence to get on stage.

3. Remember: They’re there to listen to you for a reason

Generally, the people listening to a public speech want to be there. They showed up to either listen to you specifically or a representative from a company (you).

In both cases, they’re interested in what you have to say and didn’t come to heckle you. Just remembering this simple fact can often shake off a lot of pre-stage jitters. 4. Learn how to control your breathing

Learning to control your breathing is critical to calming the butterflies that arise just before a big speech. Often, our breathing accompanies our mental state. However, most aren’t aware that the same can be said in reverse: if you learn to control the state of your breathing, you can change your emotional state.

By taking a moment to notice your fast and shallow breaths and then adopting longer and deeper breaths, you’ll gradually calm the mind and regain control of your mental state. This is highly useful because it’s something you can do anytime, whenever you notice the nervousness arise, so it places you in control.

5. Work on your inner dialogue

The inner dialogue, or our negative self-talk as it’s so often called, is the conversation going on inside of your head at all times of day. It’s a collection of everything you’ve ever experienced made manifest into words– words you’re reciting to yourself on repeat all day, every day.

This inner dialogue can wreak havoc on our ability to work up the courage to speak in public. Joel Osteen, world-famous pastor of Lakewood Church in Houston, Texas, once recounted his own wrestle with his inner dialogue shortly after reluctantly taking over as pastor when his father John Osteen had passed:

“I overheard two ladies say, ‘he’s not as good as his father.’ I was already insecure and—boom—another negative label.”

Begin working to notice this inner dialogue at work. When you do, just noticing the irrational behavior it exhibits is often enough to calm the roar of negative thoughts. It won’t go away completely, but the difference will be noticeable and, with time, it will be manageable.

So, take these tips, learn to overcome (or at least manage) your fear of public speaking, and get ready to go to a whole new level in your career.