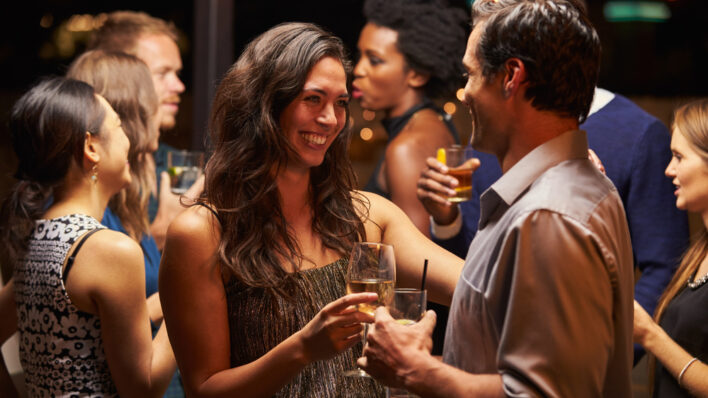 4 Ways To Impress People During A Conversation

If pushed, most people would admit that they have a desire, at some level, to impress others. You could impress
By Joshua Weisner    December 27, 2016

If pushed, most people would admit that they have a desire, at some level, to impress others. You could impress

If pushed, most people would admit that they have a desire, at some level, to impress others.

You could impress others by the type of car you drive, or the technology that you flaunt or by the clothes you wear.

But a material display of wealth isn’t that effective or authentic. The most effective and longer lasting way of making a good impression on others is through engaging in a meaningful dialogue with them.

Think for a moment and make a list of the people that have impressed you in the past. I’m sure that in most cases your list does not include the people with the most material wealth, but those that are intelligent, smart, or even funny especially when they’re engaged in a conversation.

So, whether you want to impress the interviewer to get a job, the boss to get a raise, or simply to make better friends, here are four surefire ways to do so.

1. Remain confident in your beliefs

The fact is that no one can be right all the time. We may be wrong about some fact, belief, or judgment. But if you always suspect yourself, and shy away from standing up for your beliefs, you will not be able to create a good impression on others.

There is nothing more impressive that a person that boldly states one’s conviction that is backed by sound reasoning. People that have an opinion on issues are more respected by others than those that doubt their own reasoning and intelligence. So, in order to impress others, you must speak with conviction but without sounding arrogant in any way.

had stated that almost every one of us craves recognition and praise. It is an innate feeling that is present in almost everyone.

By giving compliments when due you will make the person feel good about him or herself. Whether you like the shoes or the earrings, you must not shy away from giving positive remarks. But avoid buttering up a person by giving lots of praises. A simple and honest compliment will go a long way in making a good impression on the other person.

During conversations, it is a good idea to gaze at the eyes as you are more likely to connect on a personal level.

RELATED: Which Type of Communicator Are You? Find Out and Improve Your Skills

You might appear cold by the other person if you avert eye connection when addressing a person. The eye is said to be the window to the heart of a person. So, if you want to impress the other person make sure to look straight in the eyes during the conversation.

People that don’t smile during a conversation are considered untrustworthy, according to a postdoctoral researcher in psychology at NYU, Peter Mede-Siedlecki. When you smile when speaking, you will have a better chance of influencing the other person. But avoid overdoing the smile part particularly with the opposite sex as it may appear flirtatious, pretentious and unprofessional.