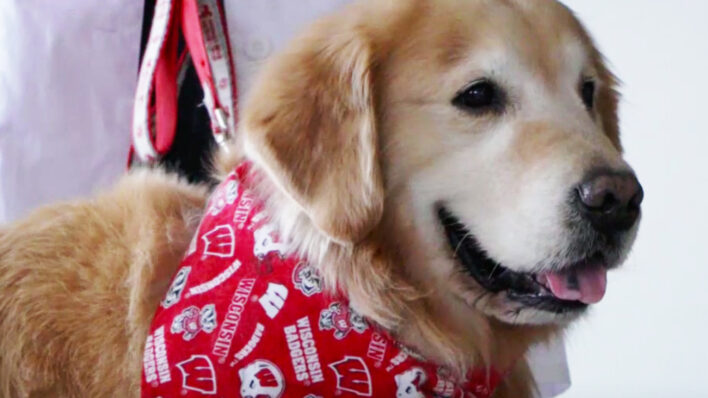 When David MacNeil’s peloved dog Scout was given a 1% chance at surviving his cancer, he refused to give up on him– and so did these vets.
By Aly Walansky    January 31, 2020

When David MacNeil’s peloved dog Scout was given a 1% chance at surviving his cancer, he refused to give up on him– and so did these vets.

Anyone who has lost a pet knows how hard it can be, so it’s easy to understand why when David MacNeil’s 7-year-old golden retriever, Scout, was given a month to live, he refused to accept it.

Scout collapsed suddenly in the summer of 2019. MacNeil rushed his beloved dog to the vet, where a tumor was found growing on Scout’s heart. After diagnosing Scout with an aggressive form of cancer, a veterinarian told MacNeil his dog had just one month to live, according to NBC Madison, Wisconsin affiliate WMTV.

There he was in this little room, standing in the corner… and he’s wagging his tail at me. I’m like, ‘I’m not putting that dog down. There’s just absolutely no way.

He refused to give up on his dog

Local vets told MacNeil there was no hope for Scout, but MacNeil refused to accept that fate for his furry friend.

Seeking help elsewhere, MacNeil took Scout, who is also his company WeatherTech’s unofficial mascot, to the University of Wisconsin School of Veterinary Medicine.

The vets there agreed that the dog had just a 1% chance of survival, but were determined to treat Scout anyway. They administered aggressive chemotherapy and radiation.

Throughout it all, vets say that Scout maintained his sweet, calm temperament, making them even more determined to restore Scout’s quality of life.

After just a month of treatment, they discovered that Scout’s tumor has shrunk by 78%– and today, it’s been nearly eradicated!

He found a way to give back

MacNeil was so grateful to the vets who saved his best friend that he decided to take out a $6 million ad during the Super Bowl to promote the resources that kept Scout alive. The 30-second spot, called “Lucky Dog,” opens with Scout running on the beach and tells the story of his survival.

The ad then advises people on how to donate to the veterinary school’s research program, helping the vets keep even more pets alive.

The research could save humans too

The dean of the school told WMTV that the ad will help all veterinary medicine and also cancer research that can also benefit humans.

“This is an amazing opportunity not only for the University of Wisconsin–Madison and the School of Veterinary Medicine, but for veterinary medicine worldwide,” said university dean Mark Markel.

He explained that the donations can also benefit cancer research that will benefit humans.

Research into animal cancers can teach doctors about human cancers too. “So much of what’s known globally today about how best to diagnose and treat devastating diseases such as cancer originated in veterinary medicine.”

For his part, MacNeil is so grateful to have Scout safe and sound that he wants to help others in turn:

“I hope it has a positive impact on cancer for animals and people, all over the world.”

Scout and MacNeil’s story reminds us that when we refuse to give up on hope and follow up through to the end, the results can help not just our nearest and dearest, but have a ripple affect throughout the world as well.