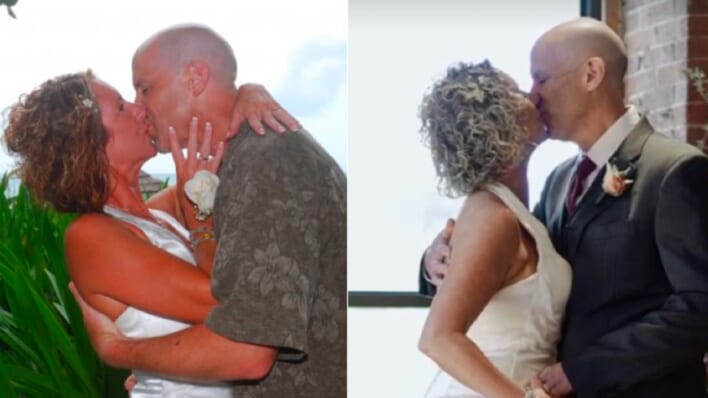 One Saturday evening, a man in Pennsylvania proposed to his wife as they watched their favorite television show without realizing
By Rajana Rajeendran    October 22, 2022

One Saturday evening, a man in Pennsylvania proposed to his wife as they watched their favorite television show without realizing that he was already married to her.

Peter Marshall, 56, was diagnosed with an early onset of Alzheimer’s three years ago and had begun losing memories including the ones he had cherished of his wife. Although, his wife, Lisa Marshall, 54, was determined to create new memories with him, it was “heartbreaking” for her to watch him unable to recollect old memories as she does.

Peter and Lisa Marshall Had a Whirlwind Romance

The couple met each other as neighbors in Harrisburg, Pennsylvania. Both were married to different partners and were busy raising kids. The families had formed a close connection until Peter’s family moved to Connecticut. After almost a year of no contact, they reconnected when they learnt they were each going through divorces.

RELATED: Serena Williams’ Husband Alexis Ohanian Is Proof of Why You Should Never Settle for Less in Love

The two quickly became inseparable and were on an eight year long distant relationship until their children were in college. After their wedding, Lisa moved into Connecticut with Peter. Lisa described her past 12 years of marriage as a whirlwind romance.

“He’s so kind, so gentle, so flirty and fun and romantic. He’s always been so passionate about our relationship. About me.” She said.

When Peter began forgetting his wallet or keys and slowly even words or what they meant, Lisa brushed it off as just signs of old age, but when friends and family members noticed that something was really wrong with Peter, she was concerned. After extensive tests, Peter was diagnosed with Alzheimer’s disease on April 30, 2020.

“I didn’t understand until I started researching and realized this was going to have a profound impact on our lives, and it was going to take my husband,” Lisa said.

RELATED: Best Dating Quotes to Keep You Motivated in Your Search for Love

Soon the disease took over the couple’s life and memories started fading away for Peter. The first time Peter forgot his wife was when they were on a regular getaway in Rhode Island. On their way home, Peter started giving her directions as if she were a different driver who did not know where he lived.

“When we got home, he ran out to my side and opened my door for me, and walked me into our house and was so nervous showing me around,” she said. “It was adorable, but I kept waiting for him to snap back into reality, but he never did.”

“He Fell in Love With Me Twice”

On December 12, 2020, as Peter and Lisa cuddled together watching their favorite TV show “New Girl”, Peter noticed Lisa crying during a heartfelt wedding scene. Looking at her, with a huge grin on his face he said, “Let’s get married.”

Lisa was surprised and honored to see her husband falling in love with her twice. She sent a video of the moments after the proposal to her children who encouraged the couple to renew their vows. Lisa’s daughter, an event planner reached out to vendors who agreed to donate their services. On April 26, Lisa walked down the aisle to Peter waiting at the altar. A dementia specialist officiated their ceremony and the two shared simple vows.

At a time where it is difficult to find a love story enduring all the tests life throws at its way. The love Lisa and Peter has for each other is not only refreshing to hear but also reassuring for all the romantics waiting for their own love story. Currently Lisa runs a blog to help other caregivers of people with Alzheimer’s. As the disease progresses, Peter now battles with hallucinations, paranoia and extreme memory loss. Lisa is determined to stay by Peter’s side as she faces reality one day at a time knowing that he will always be hers.

Love is complicated, difficult, but deeply inspiring to witness! We all hope to have a love as strong as Peter and Lisa’s.

What Are The 5 Love Languages, How Do You Speak Them, And Which One Is Right For You?