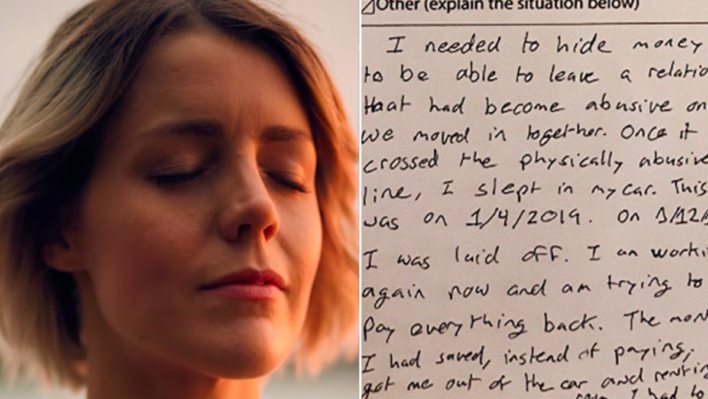 “Be gentle with each other. You never know if someone is ready to shatter.”
By Heidi Hamm    December 15, 2022

“Be gentle with each other. You never know if someone is ready to shatter.”

According to The National Coalition Against Domestic Violence, nearly 20 people per minute are physically abused by an intimate partner in the United States. The majority are women.

Escaping domestic violence is difficult with abusers often going to extreme lengths to prevent their victims from leaving. And if they are able to get out? They are often left with nothing.

Such was the case for one woman who found herself homeless and broke after fleeing an abusive relationship. Thankfully, however, she found compassion and help when she needed it the most.

The One Phone Call That Changed Everything

Imgur user, @tigerlilytoth, works as a loan counselor and is used to people not wanting to take her calls.

Admittedly, she had reached a point in her career when she was somewhat jaded and on the defensive, expecting the worst of people.

“A lot of people avoid my calls, and some are flat-out rude or verbally abusive, so my guard is a bit raised whenever I get someone on the phone,” she wrote in an Imgur post that has since gone viral.

However, this phone call was different, and it changed her perspective. She decided to share her story to remind people that we never know what someone may be going through and that it’s important to be gentle.

In the post, Tigerlilytoth shares that she just got off the phone with one of her clients — a “woman whose loan was several months delinquent.”

The reason why is devastating.

She writes: “She said she willingly sacrificed her credit in order to pay for other things like a motel room in order to keep herself safe from her abusive ex-boyfriend.”

Imagine having to choose between saving your credit or saving yourself. There is no choice.

Tigerlilytoth also shares a screenshot of a note written by her client further explaining her dire situation.

“I needed to hide money to be able to leave a relationship that had become abusive once we moved in together,” the note reads. “Once it crossed the physically abusive line, I slept in my car.”

As if this wasn’t already bad enough, the hits just kept coming. A week after seeking refuge in her car, her employer laid her off. Rather than use the money she had secretly saved to help pay off her loan, she used it to put a much-needed roof over her head instead.

Eventually, she found a new job and was working hard to make up for what she owed — she just needed help getting back on her feet.

That’s where Tigerlilytoth comes in.

A Loan Counselor Comes To The Rescue

After hearing her story, Tigerlilytoth knew she had to do something. Working with her client she was able to come up with a solution — one that didn’t require any payments.

“When I told her we could fix it easily, and without paying anything, she started crying (so, of course, I cried, too, at my desk). We got her fixed up, and she (and her credit) are going to be alright.”

Struggling with debt is hard but it’s not the worst demon some people have to face. And Tigerlilytoth knows it.

“Loans are scary, dealing with money is daunting, but for some people, there are far worse monsters to deal with than a delinquent loan.” She writes. “I can’t imagine writing the above. What if I have a daughter some day? God.”

What her client suffered is heart-wrenching. The fact that she made it out the other side should be applauded. So too, should a loan counselor who made the effort to give a leg up to someone who desperately needed it.

She ended her post with a poignant reminder for all of us: “Be gentle with each other. You never know if someone is ready to shatter.”