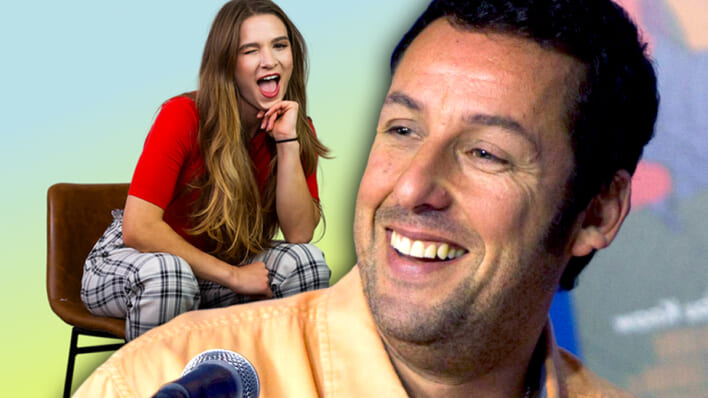 Adam Sandler superfan Charlotte Jolley will stop at nothing to work for her idol. But have her recent efforts gone too far?
By Jenna Pearl    June 4, 2022

Adam Sandler superfan Charlotte Jolley will stop at nothing to work for her idol. But have her recent efforts gone too far?

We’d all like to think we would go the distance to make our dreams come true, but few of us have gone as far as aspiring comedian Charlotte Jolley.

RELATED: From Wacky Outfits to IHOP Encounters, Here’s Why Adam Sandler Is The Picture of Humility

Recent Texas A&M University grad Charlotte Jolley has made it clear that she will do whatever it takes to make her dream of working for Adam Sandler come true. Her most recent tactic? Buying billboard space around West Hollywood, inviting Adam Sandler to check out her website and, eventually, hire her. This is following a costly video campaign trying to get Sandler’s attention. But how did she get here, and what does her journey say about perseverance?

Jolley became a fan of Adam Sandler as a child, having grown up watching his movies. After graduating college in 2020, she moved out to Los Angeles in an attempt to get a job at Happy Madison, Sandler’s production company.

Since arriving in Los Angeles, Jolley has gained experience in the comedy world through producing, writing, working on a YouTube series, and doing stand-up. Her role model is, of course, Adam Sandler.

“If I could emulate anyone’s career, it would be Adam Sandler’s,” Jolley told Mel Magazine. “When he was my age, he was on SNL. He started his own production company where he employs all of his friends […] he has his own stand-up career.” Jolley added that throughout her time in Hollywood, she’s only ever heard good things about Sandler, which is really saying something in Tinsel Town.

Jolley has had some near misses in her attempt to get Adam Sandler’s attention. While working in Los Angeles, she heard a Happy Madison employee would be coming by, so she spent an entire day drafting a letter to Sandler. Unfortunately, she missed her chance to pass it along. Later, while visiting family in Maui, she learned that Adam Sandler had visited the same area of the island only hours before.

Currently, there are five billboards around West Hollywood with Jolley’s winking face and the message, “Adam Sandler, I’m going to work for you. If you’re cool, visit: AdamHireCharlotte.com.” Jolley’s website features her most ambitious bid to work for her idol: a four-minute video posted to YouTube in January, showcasing her talents and her love of Adam Sandler.

Jolley’s “Message for Adam Sandler” Is Funny – if Elaborate

The video is hilarious, snappy and well-edited. It starts with Jolley talking straight to the camera, addressing Sandler. She expresses her desire to work for Happy Madison before the video begins in earnest.

Jolley parodies the Beach Boys’ song “Wouldn’t It Be Nice,” with lyrics like, “Wouldn’t it be nice if you hired me? Then I wouldn’t have to be so poor.” Meanwhile, the video jumps between clips of Jolley recreating iconic Adam Sandler scenes and Jolley showing her love of Adam Sandler around Hollywood: cleaning his star on the Walk of Fame, holding up a “Honk if you love Adam Sandler” sign in traffic, and dancing with a “Break dancing for Adam Sandler” sign on the sidewalk.

RELATED: Jackie Sandler (Adam Sandler’s Wife) and the Story Behind Their 22-Year Romance

The video then transitions to a clip of Jolley dressed as Adam Sandler, singing about how she wants to be hired by him. A caption reads, “You really did help raise me…” followed by childhood photos of Jolley with Adam Sandler movies on the television in the background.

The video ends on a scene of Jolley playing basketball with a dozen or so friends. She looks straight to camera, says, “Adam, if I make this shot, you have to hire me,” and misses. Her friends then hilariously lift her up on their shoulders and cheer while waving a flag plastered with Adam Sandler’s face. The end screen features Jolley’s personal contact info.

Have Jolley’s Attempts Been Worth the Effort?

“I have tried just about everything under the sun without crossing boundaries,” Jolley wrote on her GoFundMe page. Her other efforts have included, “creating and handing flyers to thousands of people, local businesses, multiple areas within LA/Malibu for many months, going by the Netflix studio, posting to every platform but getting shadowbanned as an act of “spam”, […] truly anything and everything!!”

It’s worth noting here that Jolley’s GoFundMe is only necessary because it took most of her savings to produce the video, which in the past five months has been viewed less than 1000 times and still hasn’t gotten her foot in the door at Happy Madison. Her YouTube channel only has 69 subscribers, and her GoFundMe has so far raised $85.

What Does It Take to Make It in Hollywood?

Jolley’s quest to work for Adam Sandler has definitely raised a few eyebrows. In an interview with Fox News, Jolley herself even acknowledges that her tactics are a bit bizarre. “If you want results that nobody else has, you have to do things that nobody else has done,” she said. “And I haven’t gotten a restraining order yet!”

There’s no denying Jolley’s got hustle, and her can-do attitude can only be a good thing, especially in an industry as competitive as filmmaking. But her struggle to get Adam Sandler’s attention really begs the question: what exactly does it take to get noticed in Hollywood?

RELATED: Top 4 Celebs Who Are BFFs With Adam Sandler

After all, Jolley spent almost all of her money trying to get Adam Sandler’s attention. Is this what we expect from young creatives? That they quite literally go for broke in the hustle for success?

We’re all familiar with the narrative of young hopefuls flocking to Los Angeles, juggling side hustles while pursuing their creative dreams. We like to repeat the success stories: how one young artist beat the odds and ascended to stardom.

We choose to ignore the more common narrative: artists who hustle just as hard as everyone else, but who never get that chance encounter, that once-in-a-lifetime opportunity, that lucky break, and who watch the years pass just to settle for a job that will pay the mortgage.

We especially don’t like to mention the cut-throat system that makes hustling as hard as Charlotte Jolley a necessity in the first place. Hopefully her efforts will ultimately pay off, or she will learn a lesson about herself that will be just as valuable.