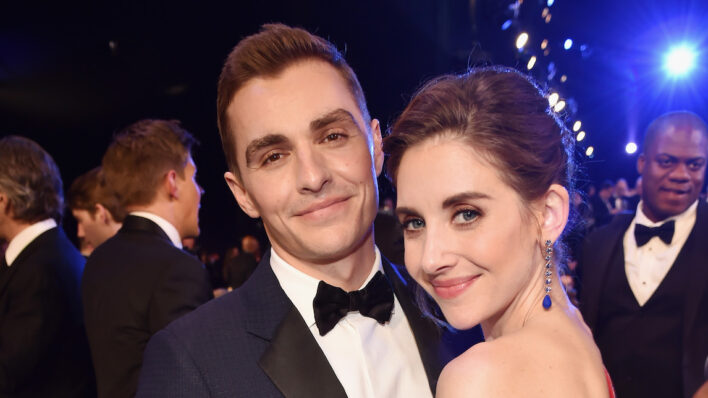 Dave Franco and Alison Brie have been together for nearly a decade and yet, many fans don’t even know that the talented actors have been married since 2017. Maybe that’s because, in Brie’s words, they have a “super-mellow” marriage.

Their relationship appears to be devoid of any drama and is instead filled with fun and love. Which explains how the couple has been able to work together on a number of occasions and seamlessly blend the line between personal and professional. Best of all? Their courtship began in the most unexpected of ways.

Here’s what we can learn from Dave Franco and Alison Brie’s effortless union:

When Dave Franco and Alison Brie first met in 2011 thanks to a chance encounter at an airport, they could never have expected what was about to come next. Brie opened up about their unique origin story during a 2020 interview on The Tonight Show, revealing that their love story “starts off in New Orleans at Mardi Gras, where all great love stories begin,” she laughed.

Recalling that fateful day, she told Jimmy Fallon, “It was some incredible matchmaking done by my friend Jules. We ran into Dave at the airport — the two of them are friends — and she invited him out to dinner with us,” the GLOW actress explained. “When he finally got to dinner, he was sitting next to her across the table and, you know, everyone’s drinking, it’s Mardi Gras, my friend texted me under the table and was like, ‘You should hook up with Dave!’ and I responded like, ‘Yes, please!’”

The text also included loads of thumbs up emojis and, before she knew it, Jules “showed [Dave] my text under the table, like, ‘What do you think?’ and he was like, ‘I’m in!’” Laughing, Brie admitted that what followed was “48 hours of, you know, drugs and sex — a lot of making out.”

It could have ended there, but the fun fling quickly turned into something more. Franco was in New Orleans shooting a film, which later took him to New York and Paris. Deciding that they had felt something more during their time in NOLA, the pair agreed to meet up again in NYC and, as Brie revealed, “that was sort of like the wining and dining, romantic portion of our meeting each other.”

Then things got even more romantic.

He left a secret note in my sweatshirt on our last day of our trip in New York, saying, ‘Come with me to Paris.’ How could I say no?!

The right person can change everything

When the right person walks into your life, it’s hard not to notice. As Brie confessed to Metro in 2016, “There was a semi-immediate click.” And things moved quickly from there.

The Community star admitted she “never really wanted to get married,” but that all changed when she met Franco.

It was not a priority for me […] and I may have just been fine never getting married except that, you know, I fell madly in love and then thought, ‘Oh, I guess I could be married to you.’

“Probably about a year into our relationship I was like, ‘Oh wow, this thing I thought I maybe never would do, I could definitely see myself doing it with you,’” she said, adding that a big part of that special feeling came from the fact that “it felt super-easy and natural, and I think that’s probably how it should feel.”

It’s important to laugh together

Despite having a whirlwind romance worthy of a rom-com, Dave Franco and Alison Brie did experience a small hiccup at the start of their relationship. A hiccup they still laugh about to this day.

Franco opened up about the incident to Jimmy Fallon in 2017, saying, “My birthday came up like three months into the relationship and she decided to throw me a surprise party which was very sweet.” The only problem was that he’s not a fan of surprises or of being the center of attention and he was “freaked out” by the sheer amount of people at the party.

Franco admitted to eating a weed cookie to calm himself down, which “had the opposite effect” and led to the “first panic attack of my life.” Laughing, he quipped, “Alison and I, we still talk about how we survived my surprise party, [so] we can survive anything.”

Dave Franco and Alison Brie are on the same page

After three-plus years of dating, the two actors got engaged in August 2015, then tied the knot in a secret ceremony in March 2017. Calling their marriage “super-mellow,” Brie told The Sunday Times they’re on the same page about pretty much everything, like not having kids.

Joking that their cats, Harry and Arturo, are “our children,” she explained, “I don’t really want to have kids. It’s great because I don’t worry about when I should get pregnant — between seasons, while we’re shooting the show — I don’t think about it every day.” She continued, “It would be nice, but I think of all the things that would be so stressful. I think about how much we’re involved in our cats’ lives. Oh my God, if it was a child!”

They also agree that spending time together is the best. “We just like to hang out,” Brie told the outlet. Calling Franco a “really supportive partner” who “loves me no matter what,” she gushed, “I’ve found my person.”

They know how to blend personal with professional

Most couples would not be able to blend their personal and professional lives without any issues, yet alone do so repeatedly. But Dave Franco and Alison Brie aren’t your average couple.

The actors have worked together on numerous occasions, including The Little Hours and The Disaster Artist, and, as Brie told Hello Giggles in 2017, “It’s so nice to work with your person, to be on set with someone who is the person you feel the most comfortable with in the world.” Calling the experience “delightfully easy,” she gushed, “We do really love working with each other.”

So when Franco decided to make his directorial debut with The Rental (which he also wrote) in 2020, it’s no surprise that he cast his real-life leading lady in the leading role. Not only was the experience fulfilling, but as Franco told Moviemaker Magazine, he’s not sure he could have completed the project without Brie by his side.

“On top of her just being an incredible actress, it was so nice to have her there with me,” he told the magazine. “This was obviously my first time directing and there were moments throughout the shoot where I would really get into my own head and start to doubt myself in small ways,” he admitted, noting, “To be able to go home to her every night and have someone who would build me up and remind me that things were going well and that I was doing a good job — it was invaluable and I honestly don’t think I could have done this without her.” Meanwhile, Brie told Jimmy Fallon that making The Rental was “the greatest filming experience.”

Of course relationships require work, but Dave Franco and Alison Brie prove that it is possible to find a partner who makes it feel effortless. When you’re both on the same page about life, love, and career, mutual support and respect come easily.

In the case of Franco and Brie, they both love having fun (they did meet at Mardi Gras after all!), they’ve agreed to keep a small family (their cats are all the kids they need), and they support each other’s careers through and through. It also doesn’t hurt that they just so happen to share the same No. 1 passion — acting.