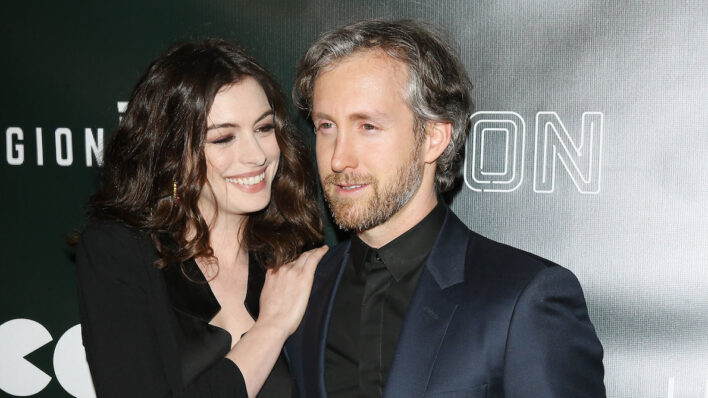 Before Anne Hathaway met her soulmate Adam Shulman, she lived through a traumatic relationship with a man who turned out to be a fraudster. How did she learn to trust again and give love another chance?
By Barbara Pavone    October 1, 2022

Before Anne Hathaway met her soulmate Adam Shulman, she lived through a traumatic relationship with a man who turned out to be a fraudster. How did she learn to trust again and give love another chance?

Ask Anne Hathaway about the moment she met her husband, Adam Shulman, and she’ll tell you the timing was terrible. She had just gone through a very public breakup that jeopardized her ability to trust.

RELATED: Here’s What Anne Hathaway Has to Say to the People Who Hate On Her

She was looking forward to being single and taking time to heal. But then Adam Shulman, an actor, producer and jewelry designer, walked into her life. He sparked feelings so intense that Hathaway was willing to put her broken heart on the line. Their connection was so strong, that it gave the Academy Award winner the courage to do something bold.

What Anne Hathaway & Adam Shulman Teach Us About Unexpected Romance

Right as Anne Hathaway’s career was taking off, she met Italian businessman Raffaello Follieri. Revealing that “it was totally love at first sight,” Hathaway was smitten with her new boyfriend, calling him “sooo good-looking.” Unfortunately, she later learned he wasn’t really the person she had fallen in love with.

RELATED: Anne Hathaway Reveals the Fiery Way She Copes With Anxiety and Stress

It was June 2008 when Follieri came under investigation for carrying out shady dealings through his charity, The Follieri Foundation. Just a few days later, the Daily Mail confirmed Hathaway had ended their relationship after four years of dating. Mere days later, Follieri was arrested on wire-fraud conspiracy and money-laundering charges.

It was a trying time. Hathaway’s trust had been betrayed, and her heart broken. However, she had to put on a brave face as police seized thousands of dollars in jewelry, as well as private journals, as part of the investigation.

Hathaway, and the public, soon learned Follieri purchased many of her gifts using misappropriated funds. What’s more, Hathaway had once served on the foundation’s board of directors (however, she was never charged with any crimes). Follieri was ultimately sentenced to four and a half years in prison.

Anne Hathaway could have easily taken a step back from the spotlight and nursed her broken heart. But instead, she kept all of her press commitments, and displayed a healthy approach to heartbreak.

“The worst thing that happens to you can be the best thing for you, if you don’t let it get the best of you,” she told The Independent in August 2008, just six weeks after her split from Follieri. She also revealed she hadn’t completely sworn off love. On the contrary, she was honing in on what she really wanted out of a relationship.

“The goal is to find someone you can be yourself around, who makes you laugh, who challenges you in a good way, and where you just spark off each other,” Hathaway told the outlet. “My parents have been married more than 25 years, with all the glory and all the pain you can imagine, but they’ve stayed together.”

I want a strong marriage like that. I’ve always wanted a family. I’m not one of those people who says, ‘What’s the point of marriage?’

Hathaway told Good Morning America in October 2008 she was “trying to move on and have a sense of humor.” She exhibited that as host of Saturday Night Live that month. “I broke up with my boyfriend, and two weeks later he was sent to prison for fraud. I mean, we’ve all been there, right, ladies?” she quipped.

More seriously, she admitted the “experience made me feel pretty gullible, and I was ready to swear off dating.” But then the unthinkable happened: “I found an amazing new guy.”

Sometimes You Just Need to Take a Leap of Faith

Fans later learned Anne Hathaway’s mystery man was Adam Shulman. As she told David Letterman, they met in 2008 through friends (at the Palm Springs Festival), and their connection “was pretty instant.” Despite being fresh from her split from Follieri, she was interested in getting to know Shulman. However, Hathaway recalled, “someone told me he had a girlfriend, so I backed off.”

RELATED: Pierce Brosnan’s Wife Was Body-Shamed by Trolls – His Response Will Melt Your Heart

Six weeks later, she realized that wasn’t the case, “so then I asked him if he wanted to go to New Orleans with me.” As she told Letterman, she had a spare ticket to a screening of Rachel Getting Married, and her best girlfriends were both busy. So, he took a leap of faith and asked Shulman along. Luckily, the bold move paid off and he agreed.

Speaking coyly with People in October 2008, the actress noted she was still technically single. However, she said, “This guy I know in L.A. is kind of doing it for me right now.”

You know when sometimes you don’t know someone very well […] but you just meet them and you’re like ‘WOW, you really have it going on’?

“This guy,” of course, turned out to be Adam Shulman, who didn’t have the same Hollywood profile as Hathaway has.

Born in Brooklyn, New York, just like his future wife, Shulman apprenticed at the Williamstown Theatre Festival in Massachusetts, and attended a summer program at New York University’s Tisch School of Arts. He then graduated in 2002 as a theater major from Brown University in Rhode Island.

Shulman has a handful of acting credits, most notably, that of Paul O’Bannon in the NBC drama American Dreams, and Enos Strate in the TV movie The Dukes of Hazzard: The Beginning. He later produced Hathaway’s 2014 indie drama film, Song One.

However, Shulman is perhaps better known as a jewelry designer than as an actor. He partnered with designer Heidi Nahser Fink in 2011 to found the jewelry brand, James Banks, in honor of his grandfather, who created jewelry for his grandmother. Shulman also designed Hathaway’s engagement ring with the help of diamond jewelry company Kwiat and owner Greg Kwiat.

“He had a very strong vision for the ring that he wanted to present, and we did work with him to design the details,” Kwiat said in a statement. “I know he was excited about the way it came out.”

Love (or a strong connection) can make you do crazy things. As Hathaway joked in 2011, “Adam totally ruined my plan. I was really actually looking forward to a little alone time, and then I fell in love like a fool!”

Despite lingering apprehensions — “I took my trust out for a ridiculous joyride with him,” she told Harper’s Bazaar — Hathaway felt it was right. “I knew from the second I met him that he was the love of my life,” she said in 2013. “I also knew that I couldn’t have met him at a worse time.” And yet, she felt so strongly about him, she recalled telling their mutual friend:

I’m going to marry that man.’ I think he thought I was a little nuts, which I am a bit, but I’m also nice.

How did they work through Hathaway’s fears? By being completely truthful with one another and embracing the fact that nothing is ever certain. “I was just very honest with him,” she told the mag. “[I told him], ‘I believe, because I need to believe, that what just happened to me was the exception and not the rule, and that people are good and you are a good person, because I feel it. And so I am not in a good place right now, but I’m going with this.’ And he has never hurt me.”

“It was scary,” she admitted. “But as the days wore on it kept on getting better and better. I found that the love I found for him made me more trusting of everyone, and the more I started to see who I had become. I had lost track of myself during those years and I actually started to see who I had become […] that’s when things got tricky and ugly. Having to forgive myself.”

How Many Kids Do Anne Hathaway & Adam Shulman Have?

She may be an Oscar-winning actress, but Anne Hathaway finds the greatest joy in normalcy. After all, it’s safe to say she’s had enough adventure in her pursuit of love to last her a lifetime.

From an intimate wedding in September 2012 to a low-key baby shower, Anne Hathaway and Adam Shulman are happiest doing “normal” things. As long as they’re doing them together. As the Devil Wears Prada star told USA Today, “We have house parties and dinner parties and just hang out […] He’s all the things you want a partner to be,” she gushed, adding, “I so find joy in his presence.”

In April 2016, the couple had their first child, son Jonathan Rosebanks Shulman. They welcomed his baby brother, Jack, in 2020. During her second pregnancy, Hathaway revealed their journey to parenthood wasn’t easy. “For everyone going through infertility and conception hell, please know it was not a straight line to either of my pregnancies,” she wrote on Instagram.

The Road to True Love Can Be Imperfect

The best lesson we can all learn from Anne Hathaway is the way she overcame her disastrous breakup with Raffaello Follieri in such a healthy way. Rather than allowing the experience to taint her outlook on love, she chose not to generalize (although that’s often easier said than done) and listened to her heart (and her gut) instead.

RELATED: Kelly Ripa and Mark Consuelos Prove Working Together Can Make a Successful Marriage – Even After 26 Years

When she met Adam Shulman, the timing wasn’t perfect and she could have quickly written him off as being a potential foe to her already broken heart, but she chose to trust that what she felt was special and worth pursuing — no matter how hard that might have been. And it’s so lucky she did. By listening to her instinct, taking a leap of faith, and being honest (both with herself and with Shulman), she was able to find the love she deserved all along.