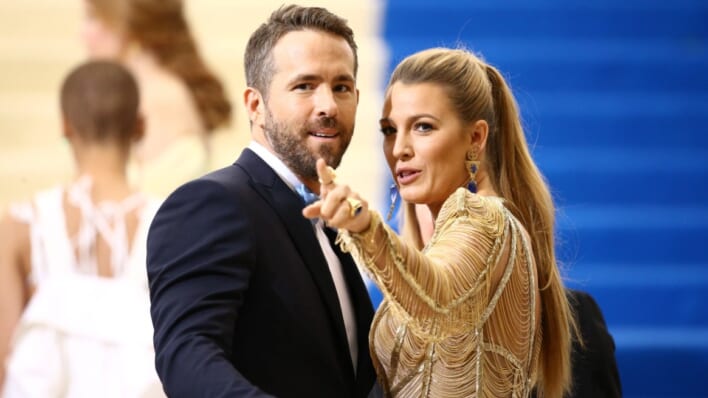 Blake Lively and Ryan Reynolds are household favorites, not solely for their superb acting but for their endearing relationship. They have a hilarious history of poking fun at each other online, and the whole internet is invested in it.
By Bianca Mercuri    October 12, 2022

Blake Lively and Ryan Reynolds are household favorites, not solely for their superb acting but for their endearing relationship. They have a hilarious history of poking fun at each other online, and the whole internet is invested in it.

Blake Lively and Ryan Reynolds are both acclaimed Hollywood actors who met on the set of Green Lantern in 2010. Both were in relationships at the time, but by the Fall of 2011, the two had begun dating after ending those respective situations. Since then, the two have been raising three children and have recently announced a fourth on the way.

This couple is truly beloved and has reigned as Hollywood’s favorite couple for the last decade of their marriage. What makes their relationship so special? Lively and Reynolds have a history of trolling each other online. They are the subject of each other’s roasts which is both relatable and endearing. The couple is known to be absolutely hilarious in their jabs toward one another.

Let’s go over some of the funniest Lively and Ryan Reynolds moments online, highlighting the best comedic punchlines they’ve used!

On August 4, 2016, Reynolds replied to a tweet via Twitter. The tweet from @stormgeddon81 read: “I’ve got to ask, what does your wife say about all these very explicit ‘fan requests’ you get? They ask for fucked up shit.” In true Reynolds nature, he used this tweet to troll his wife, saying “Pretty sure it’s my wife writing most of those. Sounds like her.”

Reynolds is no stranger to using Instagram to further his antics on his wife. On August 25, 2017, Reynolds posted a pixelated photo of himself and Lively on the red carpet, although half of her face was cropped out of the photo. He captioned it, “Happy Birthday to my amazing wife.” This one went down in the couple’s history as one of their funniest relationship moments.

But Reynolds does tend to use Lively’s birthday as an opportunity to poke fun at her. Every August 25, we look forward to seeing what new material Reynolds has come up with. In 2019, Reynolds posted to Instagram a slideshow of 10 pictures, all of his wife in-between takes or caught in a strange facial expression. These “bad” photos didn’t strike hard as Lively looks beautiful, even in her worst angle. Although the spirit of the joke was welcome and appreciated. No explanation is necessary, Reynolds captioned this series of pictures with a “Happy Birthday, @blakelively.”

Reynolds doesn’t always need an occasion or a reason to post something hilariously embarrassing about his wife. Lively is known to be one of the most beautiful women in Hollywood, praised for her natural beauty and slender figure. Her husband had no qualms posting an on-set look from her film The Rhythm Section in which Lively was looking tragically in character. And of course, he captioned it with a simple, “#nofilter.”

Blake Lively doesn’t just sit back and take the heat from her husband. In fact, she fires back twice as hard. Following in her husband’s footsteps, Lively uses Reynold’s birthday on October 23 to partake in some good-natured roasting. The most iconic birthday tribute was from Twitter where Lively posted a photo of Ryan Gosling with Reynolds cropped almost entirely out of the photo. She wrote alongside the picture, “Happy birthday, baby.”

October 23, 2020, Lively posted a candid picture of Reynolds as well as a closeup of his “birthday pie” to Instagram. The post itself was harmless and Reynolds was sporting an adorably large smile directed at his wife. It was actually the caption that happened to be the best part of this post. She wrote, “1) Who is the lost soul that selects birthday PIE. 2) What ANIMAL eats their cake (pie) without first blowing out the candles. @vancityreynolds that’s who. Happy Birthday. I honestly can’t believe we’re still married.” But Lively means this with absolute love as the two continue to grow their family, donate to charity and express nothing but admiration for one another.

RELATED: Why Ryan Reynolds’ Attitude Growing Up Offers an Important Lesson about the Mindset that Leads to Success

Lively and Reynolds are advocates for many causes and charities. In 2022, they donated 1$ million to UNHCR (the United Nations Refugee Agency), matching the public donations. The two have also been vocal about their involvement in politics, specifically in the latest election. Lively, used the 2020 elections to encourage everyone to vote as well as to embarrass her husband. The two stood side by side with voting papers in their hands. Lively wrote, “It was Ryan’s first time. He was understandably scared. It all happened so fast. Like, REALLY fast. He wept. I pretended to weep. Then he called all his friends. #voteearly.”

Why Are Blake Lively and Ryan Reynolds Hollywood’s Favorite Couple?

Hollywood marriages can begin and end in the same breath, but Lively and Reynolds’ marriage seems like the long haul. Everyone loves these two because of their willingness to celebrate their love and family in a unique way that doesn’t feel like it’s all for show. They are approachable and relatable which sets them apart from many other famous couples.

Their jokes and online back-and-forth have the public on the tip of their toes, wondering when they’ll strike next. But the unconditional love they have for each other and their kids inspires their fans to search for the same. Their kind and warm hearts radiate from our screens, giving many people a feeling of security and comfort.

In short, if they get divorced, we may not believe in love anymore. We hope to see many more funny moments, sweet speeches, and beautiful babies in the future. They might be biological parents but are the internet’s mom and dad for all intents and purposes.