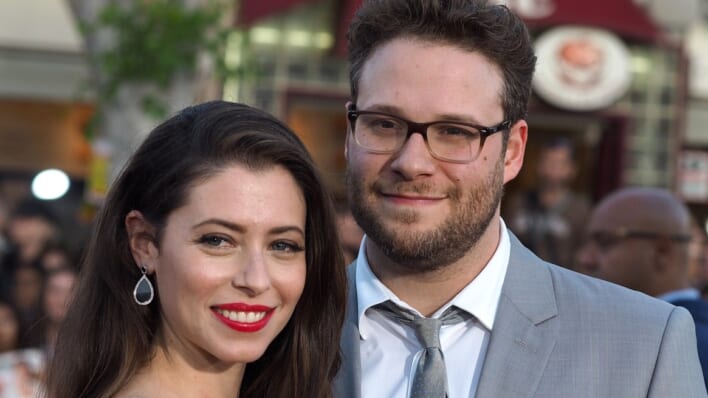 In a relationship since 2004 and married since 2011, the enduring Hollywood couple founded a non-profit charity foundation ten years ago that continues to raise awareness and funds targeted towards Alzheimer’s Disease.
By Laurence Lerman    September 21, 2022

In a relationship since 2004 and married since 2011, the enduring Hollywood couple founded a non-profit charity foundation ten years ago that continues to raise awareness and funds targeted towards Alzheimer’s Disease.

Following a stroll down the red carpet at the Emmy Awards on September 21, Seth Rogen and Lauren Miller Rogen made their way across the marble floors of the Capitol building in Washington D.C. later that week to attend a panel discussion on the steep financial and psychological costs of caring for a loved with dementia and Alzheimer’s Disease. It was part of their effort to support Pennsylvania Senator Bob Casey’s bill aimed at increasing Medicaid funding for home health aides.

The Rogens came at the invitation of the Democratic senator, who was undoubtedly aware of the interest the Hollywood couple has in the issues surrounding the fight against Alzheimer’s.

But what he might not know is that the combat against the dreaded disease played a major role in Rogen and Lauren’s relationship for more than a decade and inspired them to create the non-profit foundation Hilarity for Charity.

Lauren and Seth Rogen Have Been Together Nearly 20 Years

Rogen and Lauren first met in May, 2004 at the birthday party of a mutual friend at a Spanish restaurant in Los Angeles.

“I worked on Da Ali G Show, and [my friend] Will was dating Lauren’s friend,” Seth recalled in an interview with Haute Living. “Will and I were friends, and he said that the girl he was dating had a friend, and that we might like each other, so we went to a birthday party and met.”

Their first meeting at the party turned into what the pair categorize as their first date, which included grilled cheese sandwiches at 4:00am and games of Spanish Scrabble that lasted until dawn.

“This was before The 40-Year-Old Virgin and I had no idea who he was,” says Lauren. “And I was really shy around guys, but he was also awkward and weird around girls.”

On the pair’s “official” first date later that week, the two played miniature golf, and then they “got in a major accident on a freeway,” according to Lauren.

“A 16-year-old had stolen his dad’s car and hit us. He drove off and we spun across three lanes of traffic,” she revealed on The Tonight Show with Jimmy Fallon. “Seth totaled his car, my roommate had to come drive him home, and that was our first date.”

It’s a good thing that Rogen and Lauren are widely known to take their comedy and associated dramatic performances seriously (Rogen’s impressive list of credits includes Knocked Up, Pineapple Express, Funny People, This Is The End, Neighbors, Steve Jobs, and Long Shot), or we wouldn’t believe the pair’s early dating tales!

Things moved relatively quickly after that, with Rogen and Lauren moving in together in 2005 and the two focusing on their careers for the better part of the next decade. Rogen produced and starred in a number of films during this time, while Lauren did her share of acting, occasionally popping up in smaller roles in a number of Rogen’s films, including Superbad, Zach and Miri Make a Porno, Observe and Report and 50/50. She also wrote and co-starred in the well-received comedy For a Good Time, Call…, and later went on to direct her husband in a supporting role in the 2018 comedy Like Father, which she co-wrote.

RELATED: How Rebel Wilson’s 50-Date Challenge Led to a New Partner – And a Surprising Revelation

Lauren and Rogen made it official in October, 2011 when they got married in a hilltop ceremony at a vineyard in Northern California’s Sonoma County.

It was less than a year later that Lauren and Rogen created Hilarity for Charity, which was targeted at Alzheimer’s Disease and inspired by Lauren’s mother Adele’s becoming afflicted by early-onset Alzheimer’s. A former schoolteacher, Adele Miller was diagnosed when she was 55 and by 2012, her condition had quickly grown so advanced that she was no longer able to stand, dress or feed herself.

Lauren’s mother’s Alzheimer’s “brought us closer,” Rogen admits regarding his relationship with his wife.

“Just sitting there, watching it happen, was emotionally brutal,” said Rogen. “So we started Hilarity for Charity to raise money for research and awareness.”

Lauren Directed Husband Seth Rogen in a Film She Co-wrote

The non-profit Hilarity for Charity revolves around an annual variety show and accompanying programs, in-person events and virtual gatherings over the course of the year, which raise funds for Alzheimer’s study through the Alzheimer’s Association, the leading voluntary health organization in Alzheimer’s care, support and research.

According to Lauren, 50% of every dollar raised goes to relief grants for home health aids for families caring for loved ones with dementia.

“We were in a fortunate position where, when the time was needed, we could afford care,” says Lauren. “But that’s obviously so far from reality for the millions of family caregivers who are out there.”

“Comedy is ‘the something’ we’re actually capable of doing. Because it’s such a bummer, we thought it might be nice to, in some way, make it fun for people,” says Rogen.

The Hilarity for Charity Foundation Has Raised $15 Million

Last January marked the 10-year anniversary of the first Hilarity for Charity event and the organization is planning a celebratory fundraising birthday party in Los Angeles on October 1, featuring live music by John Mayer and a DJ performance by Sam Ronson. Lauren acknowledged the 10-year milestone on Instagram with a slew of photos and a reminder that she and her husband initially “had no idea what we were doing” but that they pulled it off and “haven’t stopped since.”

She also noted that Hilarity for Charity has raised more than $15 million since its inception ($2.2 million in 2021 alone) and awarded over 375,000 hours of free caregiving services through their Caregiver Respite Grant Program. All in, the foundation’s programs and events have reached some three million people.

By any standard, it’s a remarkable, hands-on achievement, particularly coming from a high-profile Hollywood couple who both regularly balance active work schedules.

“We can be true to our own passions and our own instincts of how to express ourselves and still help people and spread awareness and make people feel less alone,” says Rogen.