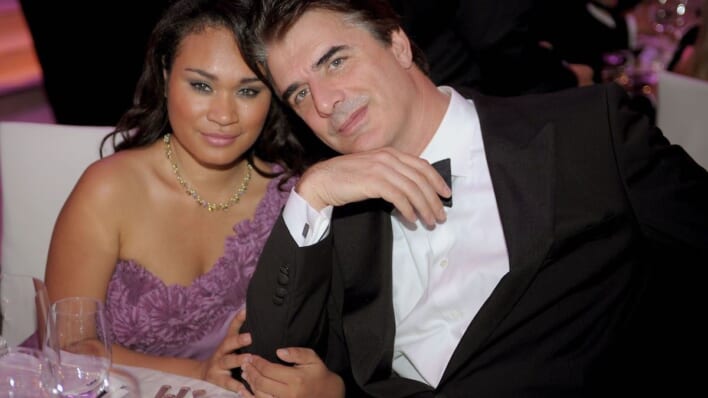 Who is Tara Lynn Wilson? 5 Interesting Things to Know About Chris Noth’s Wife

Together for 20 years and married for more than a decade, Tara and Chris’s life got bumpy when her husband was accused of sexual assault.
By Laurence Lerman    September 9, 2022

Together for 20 years and married for more than a decade, Tara and Chris’s life got bumpy when her husband was accused of sexual assault.

December 2021 had certainly kicked off with a bang for Chris Noth and Tara Wilson, with the premiere party for the new HBO series And Just Like That…, the follow-up revival to the cable giant’s smash hit Sex and The City. Noth costarred in Sex and had a featured role in the revival as star Carrie Bradshaw’s husband, known as “Mr. Big.” Noth and Wilson appeared happy and loving at the premiere, cuddling, kissing and canoodling their way across the red carpet.

But all that changed a little more than a week later when two women came forward and made allegations that Noth had sexually assaulted them in two separate incidents, one from 2004 and another from 2015.

Chris and Tara Were All Kisses and Smiles in Early December

The 67-year-old Noth denied the accusations, calling them “categorically false” and describing the encounters with the women as “consensual.”

“It’s difficult not to question the timing of these stories coming out,” Noth said. “I don’t know for certain why they are surfacing now, but I do know this: I did not assault these women.”

But over the course of the next several weeks, three more women came forward and claimed that Noth had sexually assaulted them.

The fallout from the allegations took their professional toll on Noth: He was fired from his costarring role on the CBS television show The Equalizer and was removed from the And Just Like That… finale. Additionally, a company that was set to purchase Noth’s tequila brand, Ambhar, for a reported $12 million, was called off.

And then there is the personal side of allegations, which land squarely on Noth and Wilson, his wife of more than ten years with whom he shares two children.

Who Is Tara Lynn Wilson?

Tara Lynn Wilson was born in 1979, in Vancouver, British Columbia, Canada, according to her IMDB profile page. She moved to the U.S. with her family when she was young and was crowned Miss West Virginia in 2000. Not long after, she began to pursue an acting career and attended the American Academy of Dramatic Arts in New York City.

Tara made her acting debut in the 2001 drama Piñero starring Benjamin Bratt and then appeared on an episode of Law & Order: Criminal Intent in 2004. Interestingly, the Canadian actress hit the small screen one year prior to Noth reprising his earlier Law & Order role as NYPD Detective Mike Logan on the spinoff series.

Later, she appeared in a small role in the independent drama Frame of Mind, which costarred Noth.

RELATED: Who Is Chris Evans’ New Girlfriend, and What Does His Love Life Say About Dating?

Tara met her future husband in 2001 while she was working as a bartender at New York City’s The Cutting Room, a trendy lounge and music club of which Noth is a co-owner. The actor/businessman and the bartender reportedly hit it off instantly, but managed to keep their romance on the private side for years.

“Actors can be chameleons. If you want stability, I’d say a [go with a] businessman. If you want passion, then actors,” said Tara. “But I’ve got two in one.”

The couple welcomed their first child, a boy name Orion Christopher, in January, 2008. The two were engaged that same year and then, in April 2012, Tara and Noth got married in Hawaii, eleven years after they first met.

Mother and Wife Tara Lynn Wilson is Also a Playwright

Tara and Noth had their second child, a son named Keats, in February 2020, prior to Noth going into production on And Just Like That…. It was at this time that aspiring playwright Wilson reportedly began her final drafts of what would become her first produced theatrical play, entitled B.R.O.K.E.N. Code B.I.R.D. Switching. Tara reportedly penned the piece in 2019 and it was mounted briefly in a small theater in Los Angeles.

An intense drama about a Black woman lawyer in a troubled marriage who is tasked with representing a black teenager accused of murder, the play had its world premiere at the Berkshire Theatre Group’s Unicorn Theatre in Stockbridge, Massachusetts in June 2022.

RELATED: Who Is Julia Roberts’ Husband and Why Is Their Marriage Considered Complicated?

The limited-run play received mixed reviews from the critics but a healthy endorsement from the husband of the playwright and their 14-year-old son, who attended the premiere alongside their wife and mother. Noth took to his Instagram page to proclaim, “Orion and I are so proud of Tara’s new play—come see this beautiful production!!!”

Noth also posted a picture of his wife, son and himself at the premiere in what was the first mention or acknowledgement of Wilson since the December 2021 assault allegations.

In the immediate wake of the assault allegations targeted at Noth, there was a strong sense that the accusations would spell the undoing of Wilson and Noth’s marriage. One source informed the New York Post that Wilson had removed her wedding ring, and that “Tara is upset and things are hanging by a thread. She just wants to protect the kids. That is her number one priority.”

Though Noth has claimed that his encounters with the women who have accused him of sexual assault were “consensual,” it’s tough to ignore the assertion that they happened when he was already married.

The media was all over the story when it first surfaced. But that was nearly nine months ago, when the allegations were first raised, and the couple has since been seen together at the premiere of Tara’s play in Massachusetts.

Tara Lynn Wilson and Chris Noth have shared two decades together, building a family and seemingly loving and supporting each other over that time. That the media doesn’t know what is going on between the two makes it clear that the couple wants to move on without the glare of the media spotlight disrupting the prioritization of their relationship and finding a path forward.