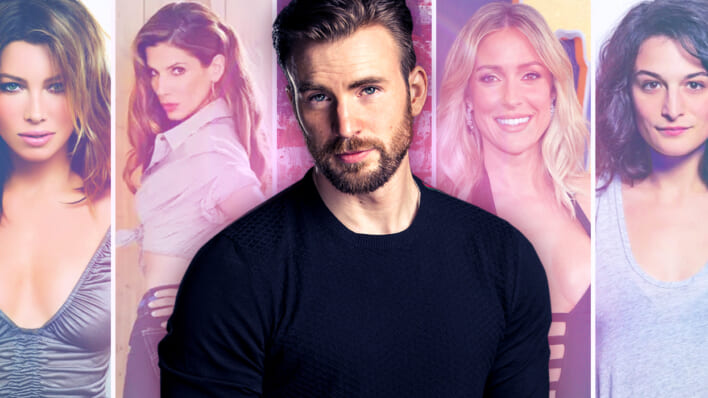 Who Is Chris Evans’ Girlfriend, and What Does His Love Life Say About Dating?

Chris Evans can teach us all about the importance of being open to love — without forcing it.
By Barbara Pavone    November 12, 2022

Chris Evans can teach us all about the importance of being open to love — without forcing it.

Christopher Robert Evans (or Chris Evans, as we know him) doesn’t mind being single. The Captain America star has dated a slew of A-listers over the years. But, contrary to what some may think, he’s not averse to settling down.

Just like Hollywood’s top bachelor-turned-family man, George Clooney, Evans is totally open to getting serious and starting a family. As he told USA Today in 2017, “I definitely want children. I definitely want a family. But you cannot put the cart before the horse.”

“The family only works if it’s built off the extension of the love you feel for a person,” Evans continued. “If you all of a sudden want the kid more than you want the relationship, you may be on shaky ground.”

That’s precisely why he’s not about to force a relationship or rush into one. Rather, Evans is holding out for the right match. He wants someone who will complement his passions and interests while also pursuing their own.

Getting super-real about what he wants in a partner, Evans told The Hollywood Reporter that he “fears being enveloped.” As he put it, he has always been “a really autonomous guy,” and he doesn’t want to lose that. “I really like to be with someone who also has their own thing to do as well,” he shared, adding, “If I’m with someone who just kind of adopts my life, that can feel a bit suffocating.”

Chris Evans dated some of Hollywood’s biggest names over the course of the past two decades. His first high-profile romance was with Kate Bosworth, who he met on the set of 2000’s The Newcomers. Their union was short-lived, however, and by 2001, he was in his first long-term relationship.

That’s when Evans began dating Jessica Biel. The couple was together for five years and co-starred in two movies (Cellular and London) and yes, marriage was definitely on the table. Calling Evans a “keeper,” Biel told Cosmopolitan in 2005, “We always talk about [getting married]. We both want to be married, and we both want to have children.”

Unfortunately, things didn’t work out and Evans appeared to hit pause on getting serious.

Following his split from Jessica Biel, Chris Evans reportedly decided to keep things casual and date around. Over the years, he was linked to a long list of stars, including Emmy Rossum, Christina Ricci, Kristin Cavallari, Amy Smart, Dianna Agron, Ashley Greene, Sandra Bullock, Lily Collins and Minka Kelly. However, the situation changed in 2016, when the Knives Out actor met comedian Jenny Slate on the set of Gifted.

While Evans didn’t address most of the relationship rumors that surrounded him following his split from Biel, he did go public with Slate. They were smitten and began dating soon after meeting. As Slate gushed, theirs was an instant connection. “[The] first night that we hung out, I was like, ‘Wow, I could hang out with Chris for, like, 90 hours,” she shared and Evans agreed. “I’ve only known Jenny for a few months, which is insane to say because we’re like the same animal,” he enthused.

His Relationship with Jenny Slate Lasted Less Than a Year

However, despite appearing to be super in-sync, they split less than a year later, in February 2017. After initially citing “conflicting schedules,” Slate told Vulture there was more to their breakup. “When Chris and I started dating, my husband and I had only been separated a couple of months,” she recalled. That meant she didn’t have time to properly mourn the end of her marriage. Still, she couldn’t resist giving love a chance. “Chris is a sunny, loving, really fun person, and I didn’t really understand why I should be prudent,” she told the mag.

Even so, she was adamant that she has “no regrets,” while Evans underscored the fact that theirs was a positive, drama-free breakup. “I am endlessly grateful for having met her,” he gushed. “She will be in my life always.”

Once Chris Evans and Jenny Slate called it quits, tabloids once again began linking the actor to other stars. Yes, Evans has dated some incredible leading ladies, but some purported relationships were merely the result of speculation by fans and the press. For one, there was his reported romance with Cinderella star Lily James.

The couple first sparked dating rumors in July 2020, when the Daily Mail published photos of Evans and James out in London. They were spotted on July 6, 2020, leaving Mark’s Club in Mayfair, and reportedly heading back to Evans’ hotel in the same cab. Just two days later, the Daily Mail spotted them again, this time having ice cream and lounging on the grass in a London park.

James was later asked outright by The Guardian if they were dating, but she played coy, simply saying, “No comment.” When Harper’s Bazaar UK asked the same question, she shared some sage dating advice: “Don’t be obsessed by boys! Hang out with your girl mates.”

Did He Really Date Selena Gomez?

Just a few months later, speculation about Captain America’s love life ramped up once more as Selena Gomez was added to the long list of Chris Evans’ girlfriends. Or, rather, possible girlfriends.

In October 2021, Evans’ fans became convinced the was seeing the singer/actress. As E! News reported, Evans posted an Instagram Story of himself playing the piano, which turned out to be the clue his followers were looking for. Eagle-eyed folks spotted the reflection of a brunette in the video, and they were sure it was none other than Gomez. Jump to November 2021, and rumors swirled that Gomez had worn Evans’ sweater while supporting bestie Taylor Swift on Saturday Night Live.

Neither star ever addressed the dating rumors, although Gomez admitted to Andy Cohen back in 2015, “I kind of have a crush on Chris Evans. Isn’t he cute?” Even so, they may have been just friends, or maybe they never spent any time together. After all, the internet is filled with rumors, and Evans’ decision to not comment on every single speculation is both worthy of applause and seriously healthy.

Since splitting from Jenny Slate, Chris Evans has done his best to keep his private life private. Despite his efforts, though, fans became convinced, as far back as fall 2020, that Evans was dating Portuguese actress Alba Baptista, the star of Warrior Nun.

Evans and Baptista’s romance was finally confirmed on Nov. 11, 2022, when photographers spotted them walking together, hand in hand, through New York City’s Central Park. Neither actor has publicly commented on their relationsip.

How Did Evans and Baptista Meet? That’s a Good Question

It’s believed the two actors met in Europe, where Evans was there shooting The Gray Man and Baptista was working on Warrior Nun. However, as the Daily Mail notes, their filming locations didn’t actually overlap. While she was in Spain, he was in the Czech Republic and France.

So who is Alba Baptista? According to IMDb, she has 28 acting credits (so far), including recurring roles on a number of popular Portuguese TV series. Her big break came in 2014, when she was cast on a telenovela called Jardins Proibidos and went on to star in more than 300 episodes. Jump to 2020, and she made her North American small-screen debut as the lead in Netflix’s Warrior Nun.

What’s more, we also know that Baptista speaks five languages (Portuguese, English, Spanish, French and German), and is 16 years younger than Evans,. She was previously linked to Canadian film director Justin Amorim, who called her his “soulmate” on Instagram in 2019.

It sounds like things are going well between Chris Evans and Alba Baptista. A source told People in November 2022 that the couple has been dating for over a year, and they’re taking the relationship seriously. “They are in love and Chris has never been happier,” the insider gushed, adding, “His family and friends all adore her.”

Could marriage and kids be next? The newly crowned Sexiest Man Alive told People that month, “That’s absolutely something I want: Wife, kids, building a family.” He shared, “I love the idea of tradition and ceremony, I had a lot of that in my life so the idea of creating that, I can’t think of anything better.”

Evans also told the outlet that he thinks he’s a better partner now than he’s ever been because he’s used every failed relationship as a chance to improve. “You spend a lot of time learning what’s been helpful and what hasn’t been,” he shared. “We all have patterns, hang-ups or baggage that repeat and echo, so I’ve really been able to kind of identify where I need improvement and what works.”

Upon first glance, Chris Evans’ dating history can make him look like a player. However, as he’s made clear, that’s simply not true. Case in point: He made a vulnerable admission about settling down when he told Men’s Journal in 2019, “I really want kids. Yeah, I do. I like pretty pedestrian, domestic things. I want a wife, I want kids.”

That said, he’s also made it clear he’s not about to rush into a union simply because of those aspirations. Finding “the right one” isn’t easy (nor is it guaranteed), and there’s no magic formula to make the perfect partner materialize in front of you. As we can see from Evans’ love life, even when you’re a Hollywood leading man who’s found incredible success in other aspects of life, dating is hard. It has ups and downs and you need to embrace the good with the bad.

Is It Really Possible to Have ‘No Bad Breakups’?

If a relationship doesn’t work out, there’s no reason to become resentful or place blame on your partner. Rather, you should appreciate the union for what it was, celebrate the joy that it brought, and use it as an opportunity to learn and grow.

It’s a valuable lesson we can all learn from Evans, who is a master of peaceful, grown-up separations. As he told Elle, “I’ve had no bad breakups in my life” because, “if you’re ever fortunate enough to love someone and have them love you back, it’s worth protecting that. It’s rare that someone can truly know you,” he mused, so “if you’ve broken through that kind of wall, I think it’s important to value that.”

Equally important is striking the right balance on the quest for love. As the actor shows us through his own healthy approach to dating, it’s imperative to be open to love, but not be desperate to have it at all cost.