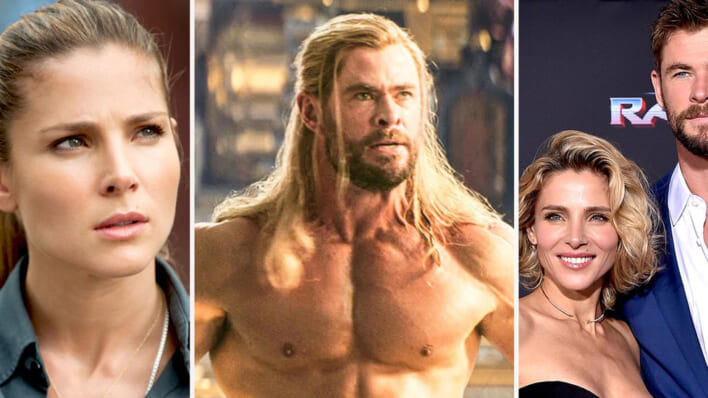 Chris Hemsworth and Elsa Pataky get honest about what it really takes to make a marriage work for 10 years — and beyond.
By Barbara Pavone    June 21, 2022

Chris Hemsworth and Elsa Pataky get honest about what it really takes to make a marriage work for 10 years — and beyond.

Chris Hemsworth and Elsa Pataky’s whirlwind romance began in 2010, when they were introduced by talent agent William Ward. They tied the knot that same year and soon began growing their family with the arrival of daughter India in May 2012, followed by twin sons Tristan and Sasha in March 2014. As the Avengers star later explained, they had no qualms about moving so quickly because they were meant to be. “It just felt right, it made sense,” he gushed.

Indeed, they have been giving us relationship goal vibes ever since. However, despite having such a seemingly perfect union, they’ve always been honest about the fact that marriage isn’t easy. Even if you have the most wonderful, supportive partner, a relationship is always going to require work.

It’s a truth that Hemsworth and Pataky have spoken candidly about, sharing both the ups and downs of married life and what it really takes to stay together for so long. That honesty, in turn, has made them even more worthy of the relationship goals title.

How Chris Hemsworth and Elsa Pataky’s Marriage Was Tested

Just a few months after Chris Hemsworth and Elsa Pataky got married, Thor hit theaters in May 2011 and thrust the Australian actor into the spotlight. As Pataky would later admit to Vogue Australia in 2018, watching her partner become an overnight sensation had its challenges. Yes, she was incredibly proud of his success, but she also shared that, “it’s difficult when you go from being an unknown person to a very known person and all the changes that come with that.”

Adding to those changes was the birth of their children and, as she explained, hitting so many milestones at once put their union to the test. “We did everything very quickly – I don’t know how we survived as a couple,” she admitted, recalling how, “we were married and then a year after we had kids. It puts a lot of pressure on a marriage.”

Speaking about those early years with GQ Australia, Hemsworth agreed that they were difficult. “My wife and I fell in love, had kids, didn’t really see each other for a few years, then fell back in love,” he said.

How did they manage that? By putting in the work, and not allowing their connection to falter. “We came out good because there is a lot of love between us,” Pataky told Vogue Australia.

Elsa Pataky Was Willing to Sacrifice for Love

All relationships require compromise, which is sometimes easier said than done. While you should not give up on your dreams, you should also support your partner’s pursuit of theirs — all without resentment.

It’s a tall order, but it’s something Pataky was willing to do. She hit pause on her career and focused on raising the kids, allowing her husband to chase his own Hollywood dreams. She put her family’s needs before her own, even if just for a short while, and it proved to be a major key to success.

However, it’s important to note that she wasn’t forced to give up acting. As Pataky explained, she had already “worked a lot” when Hemsworth (who is seven years her junior) was just starting out and so, she was open to a change of pace. “I was happy to take a break and just be a mom,” she reassured.

Equally important was the fact that Hemsworth never took it for granted. Speaking with GQ Australia, he fully acknowledged his wife’s sacrifice and was grateful for it. “In terms of work, she’s certainly given up more than I have,” he proclaimed.

Elsa Pataky doesn’t believe in a perfect marriage and she certainly doesn’t think that hers deserves all the praise it’s gotten. “It’s funny that people think of us as a perfect couple,” the Spanish actor told body+soul in 2020, underscoring that in “no way” is her union perfect. Rather, “it’s been ups and downs, and we still keep working at the relationship. I think a relationship is constant work. It’s not easy,” she explained.

RELATED: Man Hitchhikes for the First Time, Gets a Ride From Chris Hemsworth in a Helicopter

It’s a sentiment she truly believes and she’s shared it on numerous occasions. “It’s constant work to be in a successful marriage and stay together forever,” she told Vogue Australia while insisting to Hello! that, “no relationship is always a bed of roses and all marriages are built bit by bit, out of good moments, wonderful moments, and also more difficult ones.”

Why Is Chris Hemsworth a ‘Bossy’ Husband?

Now that Chris Hemsworth and Elsa Pataky’s kids have grown up a bit, she’s getting back into the acting game. And as she told WHO, her hubby is all for it. “He encouraged me to go back to work again […] and to not feel guilty about it,” she said. He’s so supportive in fact that “he works with me on my lines, my accent, and we have great conversations about the characters I am playing.”

He may have become a little too supportive, though, when the pair teamed up for 2022’s Interceptor. Pataky plays an army captain in the Netflix movie, which was executive produced by Hemsworth. The role required her to get in serious physical shape and, as she told Entertainment Tonight, she worked out for over an hour a day for six months to prepare for the part.

Along the way, Hemsworth, who knows a thing or two about getting ripped for a role, offered all kinds of first-hand advice and “it was appreciated, even if it was a bit much at times.” She teased, “He was so bossy!”

Eventually, they struck the right balance in their professional partnership, just like they have in their private one. The key is to approach both the ups and downs with love and support. “We inspire each other and he always makes me feel more confident and beautiful when I’m insecure,” Pataky told WHO. She also stressed the importance of being present for your partner. “We respect each other and have time for each other, even [after] having kids,” she said.

The smaller things are important, too. According to Pataky, the power of laughter is not to be underestimated. “He makes me laugh every day,” she gushed, adding, “Humor counts for a lot. More than anything, I enjoy laughing with him.”

As Chris Hemsworth and Elsa Pataky show us, there will always be both joy and hardship in a union and it’s how you handle the latter that’s really telling. If you have a strong bond that’s built on a strong foundation, like they do, you’ll be able to withstand pretty much anything.