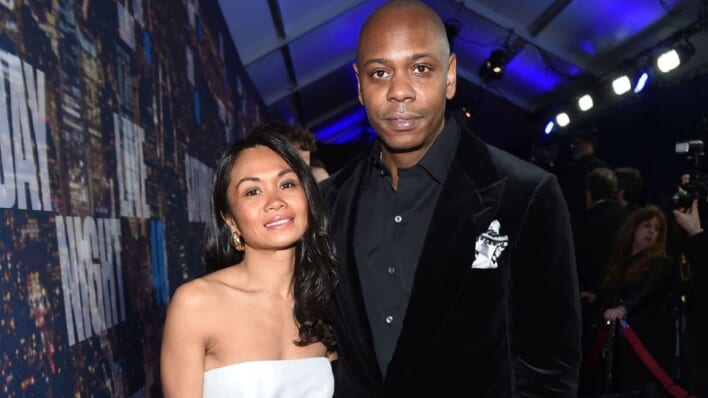 Dave and Elaine Chappelle live their life out of the spotlight with their three children in Ohio. Here’s everything we know about the famous comedian’s wife and their relationship.
By Amy Lamare    August 25, 2022

Dave and Elaine Chappelle live their life out of the spotlight with their three children in Ohio. Here’s everything we know about the famous comedian’s wife and their relationship.

Dave Chappelle may be one of the most popular comedians in the world, but to his wife Elaine, he is just Dave. Chappelle had his big break with his Comedy Central Show Chappelle Show which ran from 2003 to 2005. The show was enormously popular and put Chappelle on the map. Chappelle’s Show was scheduled to have a third season after the success of the first two seasons but that never happened.

RELATED: Why Dave Chappelle Walked Away From $50 Million Dollars …

Instead, Chappelle famously walked away from the series and a $50 million paycheck. He abruptly left during production in 2006, effectively breaking his contract with Comedy Central. He was reportedly unhappy with the direction the show had taken and needed to step away. But there has been one person who has been with the comedian through it all and that’s his wife, Elaine.

In an interview with Time, Chappelle spoke about moving to Ohio and walking away from his show, saying, “Coming here, I don’t have the distractions of fame. It quiets the ego down. I’m interested in the kind of person I’ve got to become. I want to be well-rounded, and the industry is a place of extremes. I want to be well-balanced. I’ve got to check my intentions, man.”

RELATED: Best Dating Quotes to to Keep You Motivated in Your Search for Love

There was much speculation during this time in Chappelle’s life. Fans couldn’t fathom the idea that he’d walk away from his popular and successful show and $50 million. People thought he must have a drug or alcohol problem. Others thought it was a mental health issue that led comedian Dave Chappelle to walk away from it all. That wasn’t the case at all. Chappelle simply reprioritized his life in a way that was better for himself and his family.

Through the media circus that followed Dave Chappelle’s wife Elaine Mendoza stood by him. Dave and Elaine have been married for 21 years. They tied the knot in 2001 and have two sons, Sulayman and Ibrahim, and one daughter, Sanaa.

Who is Elaine Chappelle?

Dave Chappelle’s wife Elaine Mendoza was born on August 31, 1974, to devout Christian Filipino parents. (Dave converted to Islam in 1991.) She grew up in Brooklyn and according to various sources, once planned to become a professional chef. Dave and Elaine Chappelle met more than 20 years ago, so she would have been in her 20s. After meeting and falling in love with Dave Chappelle, Elaine chose to devote herself to raising the couple’s three children.

How Did Dave and Elaine Meet?

During an interview with Howard Stern in the early 2000s, Dave Chappelle revealed that he met his then-girlfriend Elaine Mendoza in Brooklyn and at the time he said she was pregnant with his baby. He said that he was immediately interested in her, but she took some time to get to know Dave before committing to the relationship.

He also revealed that she was Filipino, which led Stern and his co-host Robin Quivers to make some distasteful jokes about Asian stereotypes. Up until this point Dave Chappelle had been a regular guest on Stern’s show and even credited the exposure Stern gave him with helping his career. After they made those so-called jokes about the future Elaine Chappelle, he has continually refused to ever appear on Stern’s show again. Though he publicly says it’s because the show tapes too early in the morning, it feels like he’s showing where his loyalties lie – with his wife Elaine Chappelle.

Dave and Elaine Chappelle have a strong marriage that has lasted more than two decades so far. Over the years, Dave Chappelle has made many comments about how his wife is his support system. In his final interview with Howard Stern, Chappelle said, “She was with me when I was poor.”

For a celebrity like Chappelle, it is especially important to have a strong support system in place. Fans and the media can be brutal to a public figure like Elaine Chappelle’s husband. She has been with Dave through some rocky parts of his career including when he walked away from Chappelle’s Show and the more recent controversy over the anti-trans content in his standup routine.

He appreciates the perspective Elaine Chappelle brings to his life and said, “My wife, if it gets real bad, she’ll let me know, like, ‘Oh, you should look into this.’ But for the most part, I try not to pay attention to it because you don’t want to be careful as a comedian. I try to keep my business small enough so it can still be authentic enough.”

Speaking of that $50 million Chappelle walked away from when he quit Chapelle’s Show and voided his contract with Comedy Central – Chappelle did an interview with Conan O’Brien in 2006 during which he talked about it, saying,  “My wife’s still a little salty… She’s not mad at me, but don’t think you’re going to walk away from $50 million and your wife’s just gonna be cool with it.”

Where the Married Couple is Today

Dave and Elaine Chappelle and their three children live on a 65-acre farm in Yellow Springs, Ohio, which is located about 20 miles from the Dayton Metropolitan area. In 2006, Chappelle said, “I used to be cable’s hottest star and now I’m just a Yellow Springs guy. It turns out you don’t need $50 million to live around these parts, just a nice smile and a kind way about you. You guys are the best neighbors ever. That’s why I came back and that’s why I’m staying.”

RELATED: Why Setting Relationship Goals Is Important And How To Do It

Chappelle grew up in Yellow Springs, where his father was the dean of students at Antioch College.

By all accounts, Dave and Elaine Chappelle are living a peaceful, quiet, and normal life in Ohio with their children. She keeps out of the spotlight and doesn’t have any social media accounts. They appear to be a grounded couple with mutual love and respect for each other and that’s a beautiful thing.