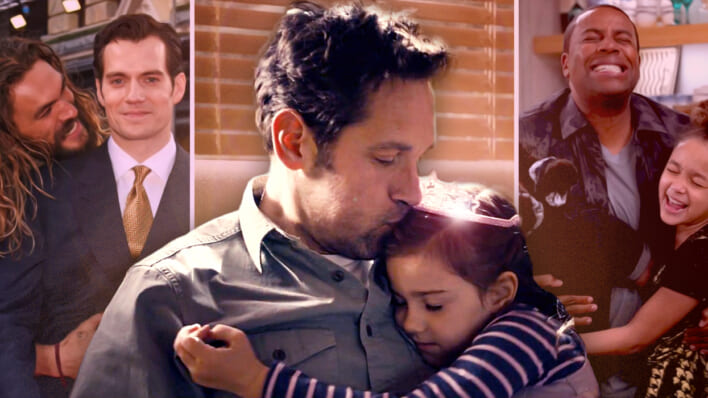 Celebrities sometimes get a bad rap from fans, and are often accused of being rude, self-centered, or entitled. RELATED: 10
By Drew Cumens    September 18, 2022

Celebrities sometimes get a bad rap from fans, and are often accused of being rude, self-centered, or entitled.

We often forget that not only are these folks extremely busy, they also deal with fans (whether calm and collected or obnoxious and aggravating) on a daily basis. However, not all celebrities are created equal and there are many who go above and beyond to please their fans.

Many times, folks on Twitter will make a call for other members to share their best experiences with Hollywood stars; thankfully, there are plenty of people who are quick to answer with some truly incredibly and heartwarming stories.

Jason Momoa Pushed Me Around in My Wheelchair

“I went to a con and caught an elevator one day to get to a panel on another floor. I was in a wheelchair. When the elevator opened its doors, there was Jason Momoa!

“He was a sweetheart and insisted on pulling me in. He also insisted on pushing me out on my floor, even though he was heading for an entirely different floor, and took a picture with me. Great guy, very sweet and funny, and BTW, HUGE.”

Mo’Nique Scolded My Boss and Gave Me $100 Dollars

“I used to work at a sporting goods store, and I was sweeping up before closing, Monique walked in and told me to stop sweeping. Then [she] went off on my manager and said, “You got this beautiful black brother in here sweeping floors?!” She even gave me $100.”

“Keenan Thompson was at the comedy club auditioning people. He allowed people to come to meet him, and we talked.

“I told him how much my mother loved him, and he said let’s FaceTime her right now; he then had a whole conversation with my mom.”

Ed Sheeran Borrowed a Phone So I Could Get a Selfie

“After a show in Atlanta, at about 1 am, [Sheeran] took a group shot with all of us and then said he would do individual selfies.

“My phone was dead, so I thought I was going to miss out. He asked to use another friend’s phone, so I could still get a picture with him.”

Hugh Jackman Takes a Roadside Photo With a Stranger

“My friend’s dad met a ‘very nice man’ at a roadside produce stand in 2011, and he couldn’t figure out why the man looked so familiar, so he asked him.

“The man laughed and asked if he had any kids, to which my friend’s dad said yes. The man said, ‘Let’s take a picture and you can show your kids later, they’ll know.'”

It was Hugh Jackman.

Anthony Davis Refused to Let Me Be a Terrible Teenager

“The man literally got in my mom’s minivan and asked to take a picture with me because I was being a ‘lame’ teenager and didn’t want to get out after my mom stopped in the middle of the street to ask him for a picture. What a cool guy!”

Bella Hadid Told Me I Was Beautiful

“She told me I was beautiful and was easy to talk to. I was shocked when I got a kiss on the cheek so soon after meeting her. For a model so successful and stunning, it was nice to feel I wasn’t an ugly peasant in her presence.”

I Had a Drink With Paul Rudd

“I worked at a trendy spot in NYC, and we got our fair share of celebs. I was pleasantly surprised by how nice many of them were, but the best was Paul Rudd. He even stuck around and had a drink with staff members. Absolutely delightful.”

“The two times I met him and got to talk to him was so awesome. Told him I was an original kb24 member and he stopped and we talked a bit, signed two pairs of my Kobe’s.

RELATED: 25 Kobe Bryant Quotes to Help You Overcome Every Challenge

“I can say it’s a great memory I will never forget.”

“Andre the Giant […] helped me when I was a lost little kid at a cat show. Put me on his shoulders to find my mom.”

Jody Watley Spent 20 Minutes Talking to Me and My Sister

“I met [Watley] at a grocery store. She talked to me for 20 minutes and even talked to my little sister on the phone right there when I asked her. My sister screamed into the phone like a crazed fan. Ms. Watley is the most gracious celeb I’ve ever met.”

James Earl Jones Told me, “May the Force Be With You”

“I sat by James Earl Jones on a plane when I was a little kid. He was so nice. I asked him to say famous lines from the Star Wars movie, and he happily obliged. At the end of the trip, he shook my little hand and said, ‘May the Force be with you!’ What a kind gentleman.”

“My dad met Lady Gaga at a restaurant in NYC and said she was one of the most genuinely sweet human beings he has ever met in his entire life. He called her ‘enchanting’ and actually became a fan of hers after that!”

“I was at the doctor and saw David Cross cover the full cost of a life-saving medical treatment for this guy* who’d been following Cross’s career from the beginning.”