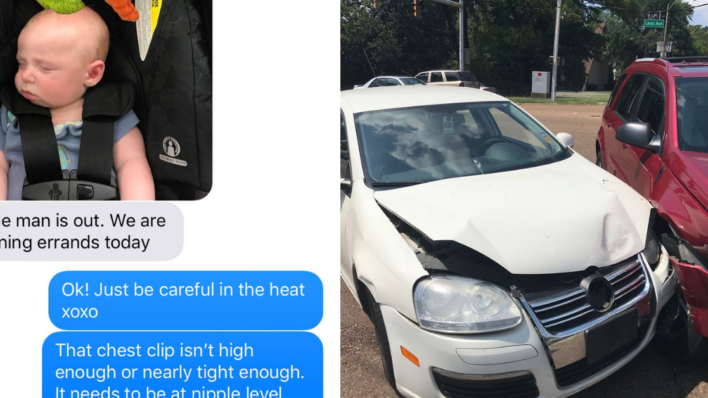 Moms often get criticized for worrying too much, but one self-proclaimed #carseatcopmom’s shows that being precautious can be a very
By Joel Balsam    December 10, 2020

Moms often get criticized for worrying too much, but one self-proclaimed #carseatcopmom’s shows that being precautious can be a very good trait — and she has an amazing story to prove it.

A good kind of “nagging”

Rebecca Tafaro Boyer had spent every second with her baby William since he was born. But after three months, she allowed her husband, David, to take the infant out for a drive.

Rebecca had one request for the excursion: David had to provide “hourly updates and recaps” on how little William is doing.

David did exactly that. In one update, he sent a photo of William in the car seat. The problem was, dad hadn’t set the car seat up properly.

“My nagging wife reply was to correct William’s position in the car seat – the straps were too loose and the chest clip was way too low,” Boyer said in a Facebook post.

“And because I know my husband, I’m sure that he laughed at me and rolled his eyes before tightening the car seat and fixing the chest clip.”

“Honey, we had a car wreck. We are fine, but the car is going to be totaled.”

The boys were less than three miles from home when a woman pulled into oncoming traffic to make a left turn and collided with the Boyer car. David was going 50 miles per hour and didn’t have enough time to break.

Miraculously enough, William was just fine in his car seat. He didn’t even wake up.

“My precious little bundle of joy was so well restrained in his car seat, THAT HE DIDN’T EVEN WAKE UP.”

“Even with the impact of the two cars, William only received a minor jolt — so insignificant that he was able to continue on with his nap, and then spend the next two hours flirting with nurses in the Le Bonheur ED.”

But David didn’t make it out unscathed. His foot was broken in three places, had three dislocated toes, and left the hospital on crutches.

“The car is a loss, but cars can be replaced – my boys can’t,” Boyer added.

Being precautious is a good thing

The moral of the story here is that a mother’s instinct is very often right and while it’s easy to criticize moms for being overly paranoid, that tendency can sometimes save lives.

Being safe and cautious is not necessarily a negative trait, especially when it comes to trusting your gut.

Surely, Boyer isn’t making any apologies for her cautiousness.

“I am so thankful that my husband took the extra one minute that was necessary to put William in his car seat safely,” she concluded in her Facebook post. “I can’t even begin to imagine how different the outcome could have been.”

“I truly believe that the reason my family is at home sitting on the couch with a pair of crutches instead of down at the hospital is because of my annoying nagging mom voice.”