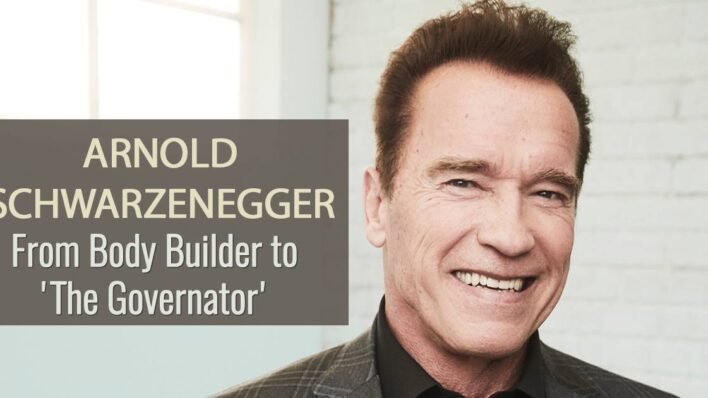 Arnold Schwarzenegger’s Life Story: From Body Builder to “The Governator”

Arnold Schwarzenegger is one of those people many of us grew up seeing on the screen. We watched him embody
By Jenny Medeiros    April 13, 2018

Arnold Schwarzenegger is one of those people many of us grew up seeing on the screen. We watched him embody Conan, we laughed as he bumbled around Danny DeVito, and we will never forget how he played a cyborg assassin in Terminator.

Older generations will also remember his impressive bodybuilding days, while younger folks may recognize him as the former governor of California. The former Austrian-American bodybuilder has gone through many roles in his life, both onscreen and off. He started out as a penniless immigrant seeking the “American dream” and ended up becoming an accomplished actor, author, politician, and businessman.

But what do you really know about the life of the man behind the scenes? As Arnold puts it, “If my life was a movie, no one would believe it.”

Growing up with a Nazi

Arnold Alois Schwarzenegger was born on July 30, 1947 to a strict Roman Catholic family in Thal, Austria. He grew up in a small village humbled by WWII, living rather poorly in an old home with no plumbing, fridge or phone.

His mother would go from farm to farm, foraging for butter, sugar, and grain. His father was a former Nazi and an abusive alcoholic who clearly favored his eldest son, Meinhard. He nicknamed Arnold “Cinderella” as he was the smaller and weaker sibling. Arnold was often beaten with a belt and berated for not being strong or smart enough.

Both Arnold and his brother followed a mandatory daily routine. They woke up at 6 a.m. to do chores and earned their breakfast by doing sit-ups. After all chores and homework were done, their father sent them outside to practice soccer, even in the midst of a storm.

When Arnold was 10 years old, he began dreaming of a better, brighter future in the Land of Opportunity. He watched newsreels about America and saw how happy and successful people were there. His discipline turned into drive. At school, he would tell his incredulous schoolmates, “I’m going to America.”

Arnold’s father wanted him to become a soccer player, so the boy trained religiously at a local club. But Arnold had his own ideas. He idolized a successful bodybuilder named Reg Park, who had won Mr. Universe, starred in movies, and created a business empire in America. Arnold wanted that for himself.

At 13, Arnold’s soccer coach took the team to a local gym. The teen stared in awe at the weightlifting equipment and picked up his very first barbell. His mind was made up. If Reg Park could make it to America by working out, then so could he. He now had a plan for freedom: Bodybuilding, win Mr. Universe, go to America, make movies, then invest in business. Simple.

To his father’s disappointment, Arnold dived headfirst into bodybuilding instead of soccer. He plastered pictures of strong men all over his room walls, prompting his mother to take him to a doctor, fearing he was gay. But Arnold’s focus was unbreakable. He trained obsessively, even breaking into a closed stadium on a Sunday to work out in the freezing cold. Every painful set and every extra rep was nothing but a step towards his goal.

At 18 years old, Arnold Schwarzenegger enlisted in the Austrian Army to complete his mandatory year of service. He never stopped working towards his dream and even skipped his training to participate in the Junior Mr. Europe contest. He won the competition, but was promptly sent to military prison for going AWOL. It didn’t matter to Arnold. He had won and was hungry for more.

Arnold placed second in another bodybuilding contest and was later voted Best-Built Man of Europe, which pushed him into the spotlight. His heart was set on winning Mr. Universe, as he view the opportunity as his ticket to America. So as soon as his army service had ended, 19-year-old Arnold got on his very first plane and went to the Mr. Universe competition in London.

He didn’t win, but one of the judges was so impressed with Arnold’s physique that he offered to coach him. Arnold was broke, so he stayed in the judge’s crowded family home above a gym. He trained tirelessly during the year leading up to the next Mr. Universe competition. At 20, he became the youngest to win the title.

Failure is a necessary experience for growth in our own lives, for if we’re never tested to our limits, how will we know how strong we really are? How will we ever grow? At only 21, Arnold Schwarzenegger had already made a name for himself in the bodybuilding world, so his next move was to make films in America. He packed what little he had and landed in the place he had dreamed about since he was 10.

Arnold rapidly became a man of bottomless ambition. He developed his brains along with his brawn, graduating from the University of Wisconsin with a major in international marketing of fitness and business administration.

At 23, he became the youngest ever to win Mr. Olympia, a record he still holds today. He won competition after competition, funneling his earnings into business investments. Before he was even 25 years old, Arnold Schwarzenegger was a self-made millionaire.

However, his acting career wasn’t going as planned. Every agent and casting director would tell him his accent was too strong, his name was too long, and his body was “too weird.” Fortunately, his chiseled physique attracted the attention of Andy Warhol, who used Arnold as a model and later introduced him to big names in the film industry.

A few months later, Arnold landed a small role in Hercules in New York. His English was terrible and he couldn’t say his lines well enough, so production ended up dubbing him. But the role lit a fire under his dream of making it as a movie star. He went on to appear in increasingly bigger productions, eventually winning the New Star of the Year awards at the Golden Globes.

Superstardom and marrying into politics

At 30 years old, Arnold landed his breakthrough role in Conan the Barbarian. The movie was a hit. It was followed by a sequel and then a string of action-hero movies including Commando, Total Recall, and The Terminator.

Arnold Schwarzenegger was now globally recognized for his intense strength, deep voice, and powerful body. His acting career was on the rise and his investments were blooming. Although entering politics was never his intention, in 1987 he married Maria Shriver, the niece of John F. Kennedy. He became more politically active in Republican circles.

During the early ’90s, Arnold chaired the President’s Council on Physical Fitness and Sports and was also the ambassador of the Red Cross. In late 2003, Arnold ran for the Governor of California title, winning by a landslide. Nicknamed “The Governator,” Arnold was an environmentally conscious politician who famously signed the first U.S. bill capping greenhouse gas emissions.

His achievements in office soon became overshadowed by media scandals and he struggled to improve the state’s financial situation. Ultimately, Arnold ended his second term with a low approval rating and decided political roles weren’t for him.

Return to movies and current ventures Failure had never stopped Arnold Schwarzenegger before, so after leaving office in 2011, he decided to revive his career in the entertainment industry. He went on to star alongside his old friend Sylvester Stallone and other high-profile actors in various action movies.

Now 70 years old, Arnold continues his well-earned life as a movie star, businessman, and environmental activist. He remains deeply involved with the Special Olympics and a dozen other charitable causes. After decades of focusing on himself, a wiser Arnold is now determined to give back.

Arnold Schwarzenegger may have the typical “rags to riches” story and his personal life is far from role-model material. But for many, he is the embodiment of the American Dream. From living in a poverty-stricken village to making a name for himself in Hollywood and beyond, his career is a solid lesson about dreaming big and working hard.

Be hungry for success, hungry to make your mark, hungry to be seen and to be heard and to have an effect. And as you move up and become successful, make sure also to be hungry for helping others.