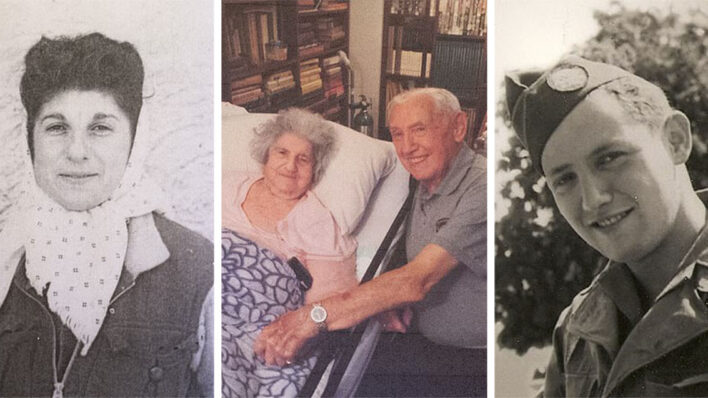 72 Years After She Saved His Life in Auschwitz, These Lovers Finally Reunited

Two Holocaust survivors who met at Auschwitz and fell in love, reunited in America after 72 years spent apart, sharing the journey back to each other.
By Aly Walansky    December 11, 2019

Two Holocaust survivors who met at Auschwitz and fell in love, reunited in America after 72 years spent apart, sharing the journey back to each other.

The Holocaust took millions of Jewish lives, destroyed families, and changed the landscape of humanity for ever. But miraculously, despite the horrors of war, some survivors managed to find love under the most unlikely conditions.

One such beautiful example, as told recently in the New York Times, was that of two survivors of the Auschwitz concentration camp, who were separated but somehow, found each other after 72 years spent apart.

Their love bloomed in an impossible place

As told by the New York Times, David Wisnia and Helen “Zippi” Spitzer were both Jewish prisoners at Auschwitz during the Holocaust. Wisnia was 17 and Spitzer was 25 when they met; they instantly fell in love.

Due to the nature of the jobs they were given at the camp – Spitzer was a graphic designer, mixing dyes and painting stripes on women’s uniforms, and Wisnia, was a talented singer, often asked to perform for the guards and German SS officers – their fate was better than millions of others, allowing them to survive.

It was because of their unusual roles at the camp that they had the opportunity to meet and share stolen moments together.

Wisnia made it to freedom first, ultimately escaping by hitting an SS officer with a shovel and running away. He hid in a barn until he was discovered by the 101st Airborne of the U.S. Army.

Spitzer was one of the last to be freed, escaping by blending in with other locals fleeing the Red Army. She eventually made her way to Feldafing, an all-Jewish displaced persons’ camp.

The couple’s happy reunion was still years away

Initially, they had planned to meet in Warsaw after the war ended, but Wisnia ultimately wound up in America instead. They both married other people, and went on to have children and grandchildren.

It wasn’t until years later that Wisnia learned that Spitzer, now called Tichauer, was living in New York. He attempted to arrange a meeting, but she did not show up because she felt it would be disloyal to her husband.

Finally, in 2016, Wisnia tried again. Taking two of his grandchildren, Wisnia met Zippi at her New York home. She was bedridden and suffering from a variety of ailments but still recognized Wisnia despite the 72 years they spent apart.

Her eyes went wide, almost like life came back to her.

Wisnia’s grandson Avi said, “It took us all aback.”

The images shared by the New York Times showcase a striking contrast between the young and in love couple who were separated so long ago and the reunited elders who have years of experience and longing between them. Their enduring bond is only reinforced by how much they have changed physically over the years.

He finally got to ask her his biggest question

Eventually, Wisnia asked the question that he had pondered over for more than 70 years. Had she interceded to spare him the fate of so many others at Auschwitz?

Holding up five fingers, she said, “I saved you five times from bad shipment.”

She had another secret to share, however, that Wisnia was not expecting. “I was waiting for you,” she said. She had been in Warsaw as they planned after the war but Wisnia had already gone to America.

As Zippi was ill, though they were reunited and the feelings were very much still there, their reunion was not to last – but they did get that long-awaited reunion, and it was a happy one.

Their remarkable story is a touching reminder that, even under the most terrifying conditions, human beings can transcend hatred and violence to find love. The courage they have shown for each other, but also in helping their fellow inmates, is a testament to their decision to allow love to prevail.