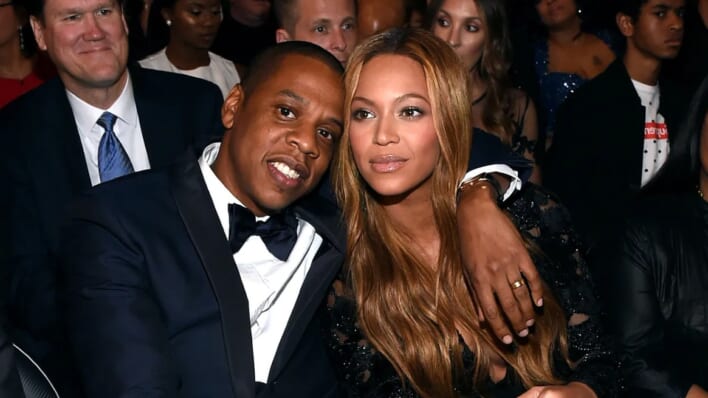 Who Is Rumi and Why Did Beyoncé and Jay-Z Name Their Daughter After Him? 

Rumi may have been a poet and philosopher in the 13th century but Beyoncé and Jay-Z know his words are as relevant and beautiful as ever.
By Barbara Pavone    August 4, 2022

Rumi may have been a poet and philosopher in the 13th century but Beyoncé and Jay-Z know his words are as relevant and beautiful as ever.

Beyoncé and Jay-Z worked hard to save their marriage following the rapper’s infidelity, and today they have a beautiful family with three kids: Blue Ivy and twins Rumi and Sir. Part of their success has been keeping their private life close to their hearts. As Bey explained, “Jay and I have always been very discreet when it comes to our relationship […] I think that saved us a lot of trouble.”

Similarly, they’ve made a real effort to keep their kids out of the spotlight. While we have seen Blue Ivy take center stage (she performed with her mom at the Oscars and helped induct her dad into the Rock & Roll Hall), her younger siblings, who were born in 2017, have been mostly shielded from Hollywood life.

What we do know is that they had a scary start in life. As Beyoncé shared in her 2019 Netflix documentary, Homecoming, it was an “extremely difficult pregnancy” and she needed an emergency C-section because “my health and my babies’ health were in danger.” Revealing that “in the womb, one of my babies’ hearts paused a few times,” she recalled, “We spent many weeks in the NICU.”

Luckily, they all made it through just fine and the babes had their Instagram debut at one-month-old. However, despite all of the interest surrounding them, they’ve rarely shown up on social media since.

However, one of the biggest questions — How did Rumi and Sir get their unique names? — has been answered. As it turns out, daughter Rumi’s name is actually a special ode to a figure from the 13th century who shared Jay-Z’s inspirational outlook on life and Beyoncé’s empowering spirit.

Given Rumi’s empowering prose and his clear, concise life advice which has withstood the test of time, it’s no surprise that Beyoncé and Jay-Z count themselves among his legion of fans.

Back in 2017, Jay-Z explained the inspiration behind his twins’ names and confirmed that ‘Rumi’ was planned well in advance and was 100% an ode to the scholar. “Rumi is our favorite poet, so it was for our daughter,” he said. As for ‘Sir,’ they thought of it after the birth because it just felt right. “He carries himself like that. He just came out, like, Sir,” the rapper shared.

Bey and Jay are not the only celebrities enamored with Rumi’s work. The poet’s Hollywood fan club includes Madonna, P!nk, and Chris Martin who credits The Guest House with helping him get through his divorce from Gwyneth Paltrow. “It kind of changed my life,” he told Rolling Stone. Explaining the poem’s message and how it lifted him up during a dark time, he continued, “It says that everything that happens to you is OK. The idea is to accept what happens to you and not run away from anything — and trust that things will blossom and become colorful.” It’s yet another lesson we can all learn from Rumi.

Who Is Rumi and What Is his Philosophy?

Jalal ad-Din Muhammad Rumi (or simply Rumi) was a Persian poet born in Afghanistan in 1207. The son and grandson of preachers and religious scholars, he followed in their footsteps. According to an extensive profile on Rumi published by the BBC, he studied in Syria in his twenties before settling down in Konya, Turkey, where he lived until his death in 1273.

The New Yorker describes him as “a mystic, a saint, a Sufi, an enlightened man.” However, most people today know him as an accomplished poet. Interestingly, though, he didn’t discover his passion (and talent) for poetry until much later in life.

While many questions still surround Rumi, what all scholars agree on is that meeting a traveling mystic named Shams of Tabriz in 1244 changed Rumi’s path forever. While it’s been debated what type of relationship the pair had (whether it was strictly professional or amorous is unclear), one thing is for sure: Shams was the inspiration behind Rumi’s timeless writing.

RELATED: 65 Great Rumi Quotes To Give You A More Positive Outlook On Life

As Brad Gooch, author of Rumi’s Secret: The Life of the Sufi Poet of Love told BBC, Rumi was a 37-year-old traditional Muslim preacher and scholar when he struck up an “electric friendship” with Shams. They became incredibly close and spent a lot of time together for about three years until, all of a sudden, Shams disappeared.

It is believed that Rumi began writing to cope with his loss. “Most of the poetry we have comes from age 37 to 67,” Gooch explained. “He wrote 3,000 [love songs] to Shams, the prophet Muhammad, and God. He wrote 2,000 rubayat, four-line quatrains. He wrote in couplets a six-volume spiritual epic, The Masnavi.”

It’s a truly impressive body of work that fuses religion with poetry while also incorporating elements of music and dance. As Rumi himself once wrote, “I used to recite prayers. Now I recite rhymes and poems and songs.” As Gooch put it, Rumi is “a poet of joy and of love.”

Rumi’s Most Powerful and Inspirational Quotes

Rumi’s works were published over 700 years ago and yet, he is believed to be the most popular poet in the US today. The Essential Rumi, translated by Coleman Barks, has sold millions of copies year after year and as of 2022, it was still a #1 Best Seller on Amazon.

As Barks writes in his introduction to the book, Rumi’s appeal lies in the fact that “he wants us to be more alive, to wake up.” What’s more, “He wants us to see our beauty, in the mirror and in each other.”

Lee Briccetti, executive director of Poets House, agrees. As she told BBC, “Across time, place and culture, Rumi’s poems articulate what it feels like to be alive.”

Indeed, it just takes reading a few of Rumi’s most popular quotes to see how inspirational and timeless his words truly are. Rumi often wrote about the importance of taking risks — “Forget safety. Live where you fear to live.” — and not dwelling on the hardships because “if you are irritated by every rub, how will your mirror be polished?”

RELATED: 8 Famous Quotes from Famous People That Will Inspire You to Love Yourself More

He spoke to the notion that failure isn’t really a failure, it’s an opportunity to learn, become stronger, and (eventually) succeed. As he once put it, “The wound is the place where the Light enters you.” The hardships are simply part of the journey. And when things don’t go your way or life deals you a difficult hand, there’s no sense in dwelling in despair. As Rumi argued, “Anything you lose comes round in another form.”

Rumi also wrote about human connection and acceptance. Honing in on the notion that we are more similar than we are different, he urged his readers to recognize that “out beyond ideas of wrongdoing and rightdoing, there is a field” and that field is the best place to be. Only when we forget about our perceived differences and meet in the middle for open, unprejudiced dialogue can we truly move forward and find peace.

As for relationships and love, Rumi believed that it’s important to look inside yourself, shatter self-imposed barriers, and become fully open to whatever comes your way. He wrote, “Your task is not to seek for love, but merely to seek and find all the barriers within yourself that you have built against it.”

With Rumi’s message of peace, tolerance, and “awareness through love,” it’s easy to see why he plays such an important role in so many lives. The name is a true tribute to Beyoncé‘s daughter.