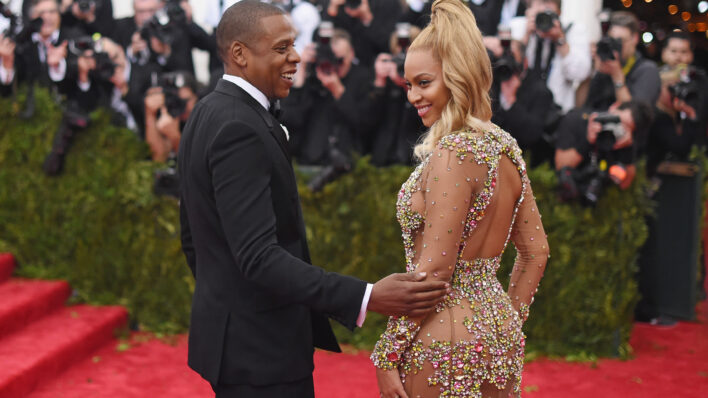 NEW YORK, NY - MAY 04: Jay Z (L) and Beyonce attend the "China: Through The Looking Glass" Costume Institute Benefit Gala at the Metropolitan Museum of Art on May 4, 2015 in New York City. (Photo by Mike Coppola/Getty Images)

Welcome to #RelationshipGoals, where we’re giving the stage to the power couples we admire. From admirable long-term relationships to inspirational
By Matt Valentine    January 7, 2019

In October of 2002, after meeting several years prior, the hit single “03 Bonnie & Clyde” was released featuring the then Destiny’s Child singer and self-proclaimed greatest MC of all time.

Speculation abound about their romantic affiliation for some time without either confirming the rumors, but as they performed their love anthem on stage in front of millions of fans night after night, their love by then was unmistakable.

Why Beyoncé and Jay-Z are a true power couple

A year after their smash hit, “03 Bonnie & Clyde”, the pair released their 2003 platinum hit, “Crazy In Love”. The pair were cemented in music history as a power couple for the ages.

Five years and several platinum albums later, Beyoncé and Jay-Z solidified their love by marrying in a private ceremony with friends and family.

But wth a relationship as high profile as theirs is, the spotlight — and pressure — would remain on them for years to come and challenge their commitment to one another time and time again.

Beyoncé had long since evolved into a solo artist and Jay-Z had turned his attention to business pursuits. But despite these massive career shifts and the pressures they faced both as individual artists and as a couple, they remained strong together.

While accepting the 2011 Billboard Millennium Award, Beyoncé thanked her family and previous Destiny’s Child group members before thanking her husband of three years. “I’d also like to thank my best friend,” she said before finishing with “I love me some Jay-Z.”

Having conquered the music world, a year later in 2012 the couple turned their attention to building a family by welcoming their first child, daughter Blue Ivy Carter.

In her 2013 documentary, Beyoncé gave a touching tribute to her Crazy In Love partner, “This baby has made me love him more than I ever thought I could love another human being…We almost feel like one.”

In the same documentary, Beyoncé also revealed that she had suffered a miscarriage prior to giving birth to Blue Ivy, saying, “To be able to experience bringing a child into this world — if you’re lucky and fortunate enough to experience that — I would never ever take that for granted.” She continued, “It’s the most powerful thing you can ever do in your life and, especially after losing a child, the pain and trauma from that just makes it mean so much more to get an opportunity to bring life into the world.”

But their challenges weren’t over. Rumors of infidelity began to surface in 2016 with a flurry of news coverage.

But instead of hiding from it, both Beyoncé and Jay-Z addressed the issue with their music, Beyoncé with her 2016 album Lemonade and Jay-Z with his later album 4:44 where he appeared to acknowledge his infidelity.

In an interview with the New York Times, Jay-Z opened up about the ordeal and what it was like to try and work through it as a couple.

He continued, “The hardest thing is seeing pain on someone’s face that you caused, and then have to deal with yourself.”

In an interview with CNN, they opened up about their decision to push forward through the adversity together. “For us, we chose to fight for our love, for our family, to give our kids a different outcome,” said Jay-Z.

And in 2017, they shocked the world when they announced that had not one child but twins on the way, Rumi and Sir Carter, who would be born June of that year.

To say that Beyoncé and Jay-Z have had their fair share of relationship challenges would be an understatement. And yet, despite the challenges they’ve faced, they’ve been able to not only stay together but become even stronger with time.

One year after Beyoncé’s Lemonade, she released a new video of a previous 2015 track (the song having been released one year before the events of Lemonade and the reported infidelity). The video, a simple performance of Beyoncé on the piano without makeup with Jay-Z shooting mixed with scenes of their personal life, was a testament to her love for her husband and a proclamation of their shared triumph over the adversity.