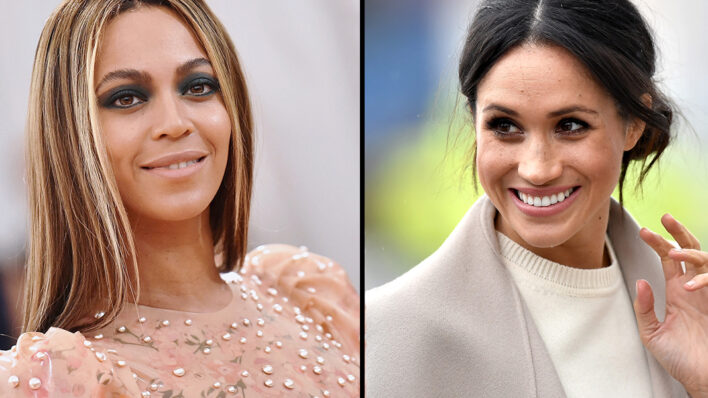 Beyoncé Writes Powerful Tribute to Meghan Markle, Blows Us Away with Her Authenticity

The Duchess of Sussex has just gotten the seal of approval of a whole other form of royalty — Beyoncé,
By Aly Walansky    February 21, 2019

The Duchess of Sussex has just gotten the seal of approval of a whole other form of royalty — Beyoncé, herself!

For Black History Month, Beyoncé has been taking the time to use her website to pay tribute to various culture figures. This week’s tribute was everyone’s favorite new royal Meghan Markle.

Beyoncé began her post by pointing out Meghan’s “charitable work in communities of color,” which began years “years before becoming the Duchess of Sussex.”

“Meghan’s background as a film and tv actress has allowed her to use her platform for good,” Beyoncé wrote of Markle. “As a global ambassador for World Vision, she traveled to Rwanda to see how access to clean, safe water impacts children, an issue that is near and dear to our hearts. She also visited and supported the Myna Mahila Foundation in Mumbai, an organization that helps solve the menstruation challenges many women and girls in the community face.”

Beyonce also pointed out how at last May’s Royal Wedding, Meghan made sure to incorporate black culture into what could have been a very set-in-royal-tradition aristocratic event.

“[She] brought many Black traditions to her Royal Wedding including a Chicago-based Black pastor, an amazing gospel choir, and a young Black cellist,” Beyoncé recalled. “At the wedding her culture was front and center, and she and Prince Harry have continued to push the race relations dialogue forward both near and far.”

Beyoncé of course made room in her beautiful post to take a moment to congratulate Meghan on the soon-to-come royal baby. “In honor of Black History Month, we bow down to one of our Melanated Monas,” she wrote. “Congrats on your pregnancy! We wish you so much joy.”

That wasn’t even the only time this week Beyonce gave Meghan love. Yesterday, Beyoncé and JAY-Z also showed Markle Sparkle appreciation while accepting their prize for best international group at the 2019 Brit Awards.

The power couple accepted their trophy via video message, and in the message recreated their music video for “APES—,” in which they pose in front of Leonardo da Vinci’s “Mona Lisa.” But in this video the couple replaced the Mona Lisa with a portrait of Meghan wearing a glittery crown and pearl necklaces.

The illustration, by artist Tim O’Brien, previously appeared on the cover of the alumnae magazine for Meghan’s sorority, Kappa Kappa Gamma.

“Thank you so much to the Brit awards for this incredible honor,” Beyoncé said to the camera. “You guys have always been so supportive. Everything is love. Thank you.”