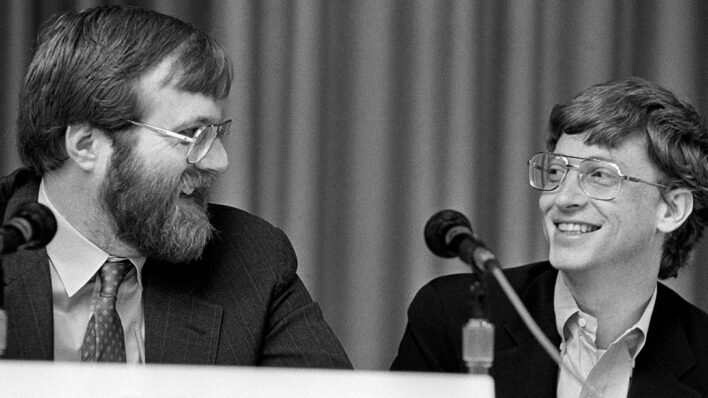 What We Can Learn From Bill Gates’ Regrets About Paul Allen

Bill Gates co-founded Microsoft with Paul Allen, but as the years progressed their friendship deteriorated, only rekindling in Allen’s final days.
By Kayla Matthews    November 14, 2019

Bill Gates co-founded Microsoft with Paul Allen, but as the years progressed their friendship deteriorated, only rekindling in Allen’s final days.

When you think of Microsoft, Bill Gates comes to mind immediately. However, numerous sources reveal the company’s co-founder, the late Paul Allen, was also instrumental to the brand’s success.

The Netflix docuseries Inside Bill’s Brain: Decoding Bill Gates recently explored many facets of the world’s most famous billionaire, including his personal life and the things he regrets.

Gates and Allen met in the late 1960s at Seattle’s Lakeside School when Gates was in eighth grade. Allen was two classes ahead.

The schoolmates landed in hot water with the school when they exploited a bug in a teletype terminal to give themselves usage privileges. Since computer terminals were rare at the time, it cost people up to $60 to use them. Allen and Gates were fascinated by the terminal, but the expenses proved prohibitive.

They worked out an arrangement to use the system for free in exchange for alerting the school to any flaws. Gates later mentioned the terminal as the object that brought the two together.

They shared the same dream

Computers were not fads for Allen or Gates. In the 1970s, Allen was working as a programmer in Boston, while Gates was a student at Harvard University. After beginning as a pre-law major in 1973, Gates quickly changed his focus and sped through some of the most advanced computer and mathematics courses Harvard offered.

In 1975, Gates made a fateful call from his dorm room to a company that had built an early personal computer called the Altair 8800. Gates offered to develop software for the system. The firm accepted and paid him $3,000 plus royalties for the work. Due to this contract, Gates left school to focus on a venture he called Micro-Soft.

The enterprise ended up being a team effort between Allen and Gates– they co-founded Microsoft on April 4, 1975. The company went public in 1987, and Bill Gates became a 31-year-old billionaire only a year later.

How did Paul Allen fit into Microsoft?

For starters, he arranged to buy an early operating system from a Seattle programmer. Once Gates and Allen tweaked the system’s code, it helped IBM’s first personal computer function in 1981.

Moreover, Allen persuaded Gates to drop out of college to pursue software development. Plus, he came up with the Microsoft name and focused on its goal of providing software for small computers, rather than the earliest models that filled entire rooms.

Microsoft launched in Albuquerque, New Mexico. However, in 1979 — a year after the company’s sales topped $1 million — it relocated to Bellevue, Washington, a Seattle suburb. There, Gates and Allen’s grew rocky relationship. In 1983, Allen left the company and clarified some of the reasons.

Allen said he disagreed with Gates on numerous things, including product and hiring-related decisions. In his memoir, Idea Man, Allen wrote:

Over the years, the result of these and other incidents has been the gradual destruction of both our friendship and our ability to work together.

Tech betrayals are nothing new

Allen does not stand alone among tech company founders as someone who disagreed with his colleagues. Take Facebook founder, Mark Zuckerberg, as an example. People have tapped Zuckerberg as the next Bill Gates, mainly due to his pioneering efforts in digital technology.

Another thing that links Gates to Zuckerberg is the unrest between co-founders. In 2005, Zuckerberg diluted co-founder Eduardo Saverin’s stake in the company and then ousted him.

Saverin, who met Zuckerberg at Harvard Unversity, invested the initial $15,000 to build and host Facebook. Six months after the site’s launch, the company relocated to Palo Alto, California.

The story, from a clandestine school meeting to a move and falling out, is a similar one.

Is it possible Saverin is Zuckerberg’s’ Paul Allen?

Saverin played an instrumental role in Facebook’s origins — much like Allen with Microsoft.

Farhad Manjoo, a tech industry expert from Silicon Valley, believes the corporation is too big to fail.

In a 2018 New York Times piece, Manjoo questioned whether Zuckerberg should still lead Facebook. He pointed out how the leader’s shares have 10 times the voting power of normal ones, making him far more influential than others at the company.

Allen claims disagreements with Gates led him to leave the company. However, company shares also played a role in his decision to cut ties.

In April 2011, Paul Allen published a book called Idea Man that shed light on some of the friction between himself and Gates.

An article from The Wall Street Journal said the printed work positioned Gates as a confrontational taskmaster and someone unsuitable for Allen’s more laid-back personality. In the book, Allen described himself as the person who sparked many of Microsoft’s ideas.

Idea Man also reveals what Gates did to maximize his monetary benefits. Gates first insisted on a 60-40 split with Allen in Gates’ favor. However, he later renegotiated it to a 64-36 split.

The last straw for Allen was when he overheard Gates talking to former Microsoft CEO Steve Ballmer.

The discussion centered around how to dilute Allen’s equity due to complaints of his alleged lack of productivity. Allen had recently been diagnosed with Hodgkin’s lymphoma and viewed the talk as an exploitation of his weakest moment.

Their final days together

Gates and Allen reportedly didn’t speak for a year after Idea Man came out. However, they eventually patched the rift, and Gates was looking forward to spending more time with Allen.

In one interview, Gates anticipated yacht trips, saying he’d already traveled that way with Allen, but was planning more once the kids left for college.

After Allen’s death in 2018 due to cancer complications, Gates emphasized the extent of his bond with Allen, saying:

Paul was a true partner and dear friend. Personal computing would not have existed without him.

In Inside Bill’s Brain: Decoding Bill Gates, the billionaire didn’t say much about the relationship between himself and Allen, but he admitted he he had been tough on Paul at times.

We had times with Paul, we would sit for hours. They were like two little boys laughing together over these old stories.

Can business and friendship co-exist?

According to the Netflix documentary, Gates reconnected with Paul when he publicized the return of his cancer. He claims the friendship was more important than anything that came between them. Even though their interpersonal drama eased, Gates may still see their longstanding tension as a regret.

Allen and Gates both possessed brilliant minds. If they had resolved their differences sooner, they could have continued to work together. They may have brought Microsoft to even more prominence.

Disagreements are frequent in the business world, especially among people with big ideas. However, it’s a mistake to let them get in the way of progress.

Allen and Gates’ collaboration made Microsoft possible and though their friendship suffered, it was clear they valued it greatly, as shown by their rekindling of it in their final days.

In our desire to reach our dreams, we shouldn’t lose sight of the people we love and those who help us along the way. Finding a work to work with those who support us rather than butting heads is the surest path to accomplishing our goals.