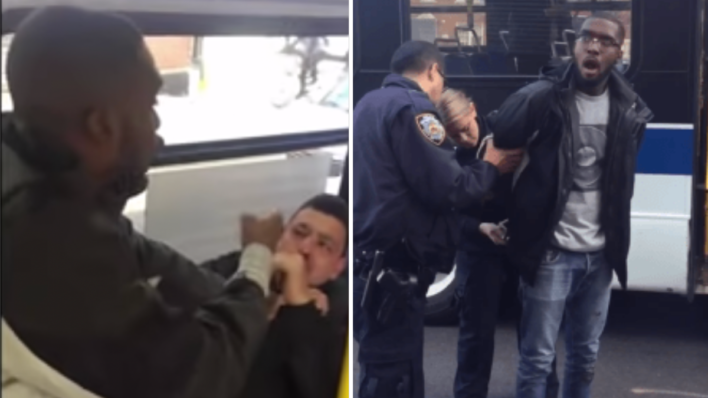 When a rapper went from hero to handcuffed in the blink of an eye, only the power of positivity would be able to save him.
By Bryan Liquor    September 27, 2022

When a rapper went from hero to handcuffed in the blink of an eye, only the power of positivity would be able to save him.

We always hear about the pitfalls of doing the wrong thing, yet Brooklyn rapper Moise Morancy will tell you that doing good can also be a rocky road.

Morancy was on the Q53 bus in the Bronx when he saw something that made his stomach turn and blood boil. Per the DailyMail, he said that there was a man trying to fondle a 15-year-old girl, touching her inner thigh.

With the motivation to act, Morancy told the man to stop. That’s when the man lunged at him and a fight ensued. Morancy got the best of him, grabbing the man as other passengers began to film the tussle.

“​​Don’t you ever do that s*** again, you hear me? Don’t touch her again,” Morancy could be heard screaming.

For almost the entire time, no one stepped in to help. Instead, Morancy held the man until the police arrived. Yet, the real outrage was on its way.

Why Rapper Moise Morancy Was Arrested by Police

When the police arrived, Morancy said that the man “was touching a little girl and I was defending her.”

However, instead of a handshake, the officer gave him handcuffs. Meanwhile, the suspect denied doing anything wrong and accused Morancy of trying to kill him.

Morancy couldn’t believe it. “I was so confused and felt criminalized. Why is this happening to me? I was told that no matter what the circumstances were, I still assaulted him,” he said.

But because of the witnesses on the bus and their footage, the truth came out as police uncuffed and thanked the bus hero. Meanwhile, 36-year-old Pablo Levano was arrested and charged with forcible touching. Let’s hope it’s the last bus ride he’ll be taking.

In an interview, Morancy said that an officer approached him with some kind words.

“He let me go, he said, ‘You’re a hero and I was you 20 years ago’ and he eventually called me the rose that grew from concrete, which was ironic because the girl gave me the rose.”

Yet, the true hero’s reception was yet to come.

How One Local Rapper Proved That Good Deeds Prevail

Shortly after, the police made amends in a big way, awarding Morancy with the ‘Good Samaritan Award.’

Morancy, who had been profiled by police before, said that the award changed his views. “I used to say I was sure there were some good officers out there, but I had never met one. I can’t say that anymore. It feels good to have a friend in the NYPD.”

To put on a bow on things, New York rapping legend Nas posted the bus video, with the caption ‘He stepped up.’

Talking about his motivation to act that day, Morancy said, “I get wanting to help people from my mother, she’s an activist. Helping people is just in my DNA.” It’s clear that his mom was a success at raising a good son.

Chances are, both Morancy and the police learned a lesson that day. For the police, the lesson is to not be so quick to judge someone. For Morancy, it’s that there are plenty of good police officers out there.

One thing is clear: By being that rose that grew through the concrete, Morancy kept an innocent girl safe and reminds us that even though the road can be rough, good always shines in the end.