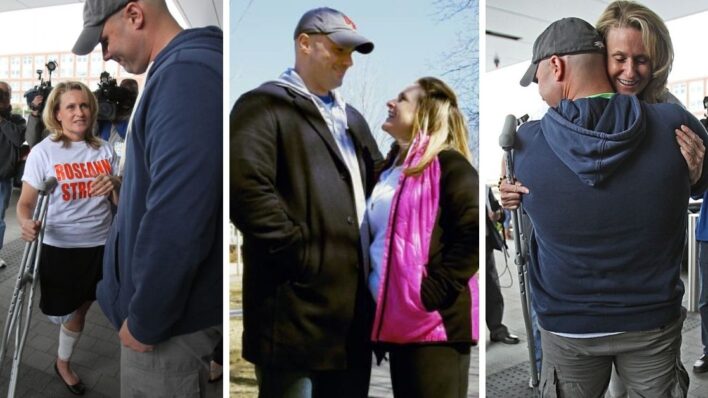 Roseann Sdoia’s whole life changed in 2013. As she neared the finish line of the Boston Marathon, she was one of the victims of a terrorist attack, which left her without a leg. Never in a million years did she think the tragedy would lead to love.
By Aly Walansky    October 5, 2020

Roseann Sdoia’s whole life changed in 2013. As she neared the finish line of the Boston Marathon, she was one of the victims of a terrorist attack, which left her without a leg. Never in a million years did she think the tragedy would lead to love.

Roseann Sdoia will never forget April 15, 2013  – it was the day of the Boston Marathon.

She never anticipated what would happen next, the horror that would result from it– nor the love that would come after.

That day, as she was about to cross the finish line of the Boston Marathon, tragedy struck.

She lost her leg after the terrifying attack

“I recall pretty much everything in the sense of what I did in the morning,” Roseann told The Knot. “Going to meet my friends… and kind of running into the explosion, so to say.”

Around 2:49 in the afternoon, two homemade bombs exploded near the marathon’s finish line, located on Boylston street. Roseann heard the loud noises.

She remembered two bright flashes of light near her feet—“That’s when the bomb went off,” and people running over to help.

I remember people around me… There was a police officer, and there was a doctor on my other side. I knew there were other people there.

The terrorist attack claimed the lives of 3 people and caused hundreds of injuries. In the midst of chaos, her future fiance Mike Materia was rushing to help other victims. Then, he found her.

Ambulances kept going by and they were all full, so a police transport vehicle had pulled up. At that same time, Mike had gotten there. They said, ‘Load her in.’

“He just picked up the head of the board and put me into the vehicle. I had kept my eyes closed because I knew something bad had happened and I knew that I didn’t want to see anything,” she tells The Knot.

Despite the fact that Mike didn’t leave her side, Roseann couldn’t remember the face of her savior. She had lost almost 90% of her blood and was fighting to stay conscious, as she was taken to Massachusetts General Hospital.

I didn’t fully see him. I never really saw his face. Once they shut the door to the wagon, it was pitch black in there. I didn’t really know anything.

A hard pill to swallow

When Roseann came back to her senses, the realization that she had lost one leg was difficult to swallow. “I didn’t really know what had happened,” she shares. “And I couldn’t understand [why people] were coming to visit.”

Once it fully hit her,she revealed that she had “a quick thought of not wanting to live with such adversity.” It was the thought of her friends and family that kept her alive and fighting.

As it turns out, one of the visitors at the hospital was no other than Mike Materia.

Love was the last thing on her mind

Roseann thought it was strange that Mike would remember her from the chaos of that fateful day.

By then, her friends and family had already approved of Mike, even though Roseann wasn’t thinking of him like that.

Her mother wasn’t the only one to notice. “A lot of my friends were like, ‘He’s cute!’” she adds. “They immediately went to look him up on Facebook, and to see what his story was.”

But then, she fell for the man who saved her

Eventually, Roseann spent more time with Mike, who was an Iraq veteran. Mike became an integral part of her recovery.

And there was much to be attracted to, as Roseann found out. “He was very thoughtful, very kind and very handsome. Just a good person,” she said.

Two months into her recovery journey, Roseann was interviewed about her progress. Mike was also interviewed. That’s when they addressed the tricky situation of their budding feelings for each other.

I think we were both concerned… We had feelings for each other, but we didn’t want to ruin our friendship. But we talked about it, and said, ‘If it doesn’t work out, let’s promise to be friends.’

From friendship to marriage

Roseann and Mike remained friends… and got engaged after more than three years of dating. “I knew it would happen,” Roseann says of a proposal. “I thought maybe Christmas, New Years, Valentine’s Day or my birthday.”

“He stood up and we looked out at the water. He was nervous, and then he asked me,” she shares. “He was down on his knee handing me the ring. It couldn’t have been more perfect… Nantucket is special to me. Special to us. It was the first place we had gone together.”

The two married that fall in a New England wedding.

“Everybody’s got a story, but this one’s a little different,” she concludes to The Knot.

I felt safe with Mike around. I felt like he took care of me that day getting me to the hospital. And then, with him being around, there was a serene feeling about it. A safe feeling with him there and it was just more than [the fact] that he was a fireman.

Beautiful things can emerge from tragedy, as Roseann’s story shows us. Even after losing a limb, Roseann refused to let her life take a stop. With resilience