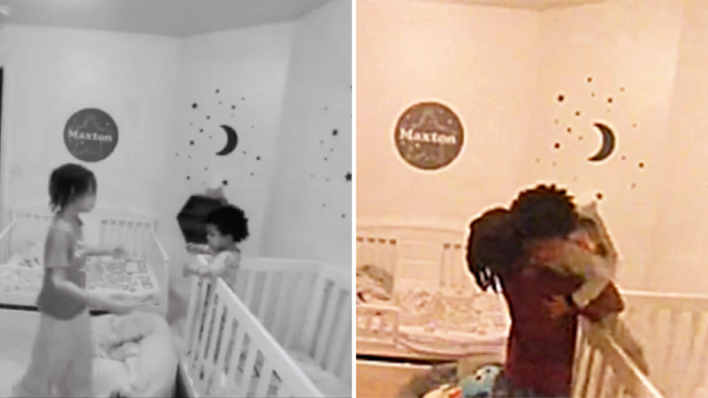 Mom Watches Son Sneak into Little Brother’s Room at 3 a.m. – What He Does Next Surprises Her

When one 10-year-old boy saw that his baby brother could not fall back asleep, he stepped in to help in the sweetest way.
By Lindsey Staub    April 22, 2022

When one 10-year-old boy saw that his baby brother could not fall back asleep, he stepped in to help in the sweetest way.

Friends come and go, but siblings are forever. Luckily for 18-month-old Greyson, he has an amazing older brother.

Greyson’s older brother is 10-year-old Mason, a caring young boy from Ohio. When Mason heard his little brother crying in the middle of the night, he did not hesitate to help.

What One Mother Saw on the Baby Monitor at 3 a.m. Surprised Her

On the baby monitor, Greyson and Mason’s mother Gloria McIntosh watched her oldest son go into her youngest son’s room to comfort him. It was 3:23 a.m., but Mason stayed with Greyson for over half an hour to try to get him back to sleep. Mason read to his brother, played with him and his toys, wiped his nose, and even climbed into his crib with him.

“I was smiling the whole time,” Gloria, a 36-year-old mother of six, told TODAY Parents.

He has a love for Greyson that is unspeakable. I can’t even really explain it.

RELATED: Man Decides To Secretly Save Brother’s Rent For 2 Years – What Happens Next Brings Him To Tears

Despite Mason’s best efforts, Greyson still would not fall asleep, so Gloria stepped in.

“I asked him, ‘Why did you just come and get me in the first place?’” Gloria said. “He was just like, ‘You had a big day and I just wanted you to get some rest.’”

Though Mason’s actions might be rare for other 10-year-olds, Gloria said this is natural for Mason.

“I’m sure Mason was tired and cranky. He was woken up at 3 a.m.,” Gloria said, “but how you saw him treat his brother is how he is. He steps up.”

Gloria shared the tender moment on TikTok, and the video quickly went viral. Now, there are more than 5.6 million likes on the post.

“I cried too much watching this omg. When he crawled into the crib I was done for… Amazing young man,” one person commented on the TikTok.

Many viewers praised Gloria in addition to Mason, attesting his kindness to how she raised him.

“This not only shows how sweet the kid is, but it also shows that he was raised right. Showing the love and patience that he was shown growing up,” someone said.

Greyson is lucky to grow up with an older brother like Mason, someone who will always look out for him. May we all have a person like Mason in our lives, and may we all be that person for someone else.